My father rarely spoke about his wartime experiences.

Growing up, I knew very little about what my father actually did during his 5½ years of military service during World War II. I was aware that he served first in Darwin, then overseas in the Middle East and New Guinea (present-day Papua New Guinea), but I knew little else.

There was one notable exception.

He often spoke about an incident that occurred during his time in New Guinea. Miraculously, he survived when a jeep in which he was a passenger left a mountain road and tumbled 450 feet (137 metres) into the valley below. But he was one of the lucky ones. Three men died; two survived.

Not every casualty in war is due to armed conflict. Some deaths and injuries are accidental.

This story is about a motor vehicle accident that occurred in New Guinea, during World War II. At the time, details of the accident were not made public. However, given its seriousness, the incident was the subject of a full military Court of Inquiry conducted over two days immediately after the accident.

Many years later, under Freedom of Information, my father obtained a copy of the report of the Court of Inquiry. This story is based on information contained in that report, my grandmother’s wartime diary (read A Mother’s Love) and what I remember my father telling me about the accident.

In April 1943, at the time of the incident, Lieutenant (Lt) William (“Bill”) Proposch was based at Wau, in the highlands of New Guinea.

Prior to the war, the township of Wau (in the Morobe Province) and nearby Edie Creek had been small mining settlements. There was a great deal of fighting in this area in 1942-43 because Wau was located on a route between the Japanese-held bases at Lae and Salamaua (to the north and north-east) and the Australian base at Port Moresby (to the south).

Earlier that year (January 1943), Australian troops successfully defended Wau against a concerted Japanese attack, ensuring the security of the area as a base for future operations.

The Wau area of New Guinea is rugged and mountainous.

The township of Wau is situated at an altitude of about 1,100 metres. The township of Edie Creek is located about 5 miles (8 km) south south west of Wau, some 2,000 metres above sea level. The highest point in the area is Mount Kaindi, which overlooks both Wau and Edie Creek. Edie Creek itself drains into the Wau Valley to the Bulolo River through a steep gorge. The creek descends some 1,000 metres over a distance of just 5 km.

In January 1943, Lt Proposch, of the 2/5th Australian Infantry Battalion, had been seconded to Headquarter (HQ) 17th Brigade at Wau as Education Officer.

On the morning of Wednesday 7 April 1943, Lt Proposch and his staff and a driver set out from Wau in a jeep and trailer on one of their routine weekly visits to Edie Creek.

There were five men in the jeep that day. Lt Proposch was accompanied by Sergeant E M Smith and Corporal M D King (both members of the Army Education Service) and Chaplain F J Graydon (who was attached to the Kanga Force at Kaindi). Driver A H Olney, of the 152 General Transport Company, was the assigned driver.

The road between Wau and Edie Creek was unsealed, steep and winding. It was dangerous, given the possibility of landslides, undermining and weakening of the road by constant water action in some places, and frequent breakaways. Drivers of vehicles using the road were given clear instructions about passing of other vehicles. At all times heavy vehicles had the right of way over smaller vehicles.

It was around 1115 hours. The jeep and its occupants had been travelling for some time and were about 2½ miles (4 km) from Wau.

As the jeep swung out from one of the salients of the climb, its occupants saw another vehicle approaching downhill. “At the time, this caused no concern,” Lt Proposch recalled in his statement to the inquiry. As the jeep continued its climb, it was evident that the oncoming vehicle had stopped in what appeared to be a wider section of the road.

The oncoming vehicle, a Dodge 15 cwt truck, was carrying troops en route from Kaindi to Wau. Seeing the jeep coming up the hill, the driver of the truck pulled over to the right hand side of the road, as close as possible to the cliff face, and stopped. He did so to safeguard his passengers and vehicle and allow the jeep to pass on the truck’s left hand side nearest the edge of the road and the valley below.

The driver of the jeep did not hesitate, but threw his vehicle into low gear and continued to crawl towards the section of the road where the truck had stopped. The ground looked solid enough and the road wide enough for the jeep to proceed safely on the right hand side of the road.

But it was not so.

When the jeep had passed about half the length of the truck, suddenly, the edge of the road collapsed. In a split second, the jeep and its five occupants were thrown into the gorge approximately 450 feet (137 metres) below the level of the road. The following sketch map, which was presented as evidence at the Court of Inquiry, helps to explain how the accident occurred.

Three men died. Two of the jeep’s passengers, Sergeant Smith and Corporal King (Lt Proposch’s colleagues) were killed almost instantly. The driver of the jeep, Driver Olney, was seriously injured and died the following morning as a result of his injuries.

The heroes of the incident were the soldiers who were passengers in the truck.

A number of these men risked their own lives as they clambered down the steep hillside into the gorge in search of the occupants of the jeep. They found the first two men about 200 feet (60 metres) down the slope. Both men were in a serious condition. Sergeant W. Hill of the Australian Army Medical Corps (AAMC) HQ Company Kanga Force, one of the rescuers, had his first aid kit with him. He gave each man an injection of morphia and made them as comfortable as possible. A soldier was left to watch over each injured man, while the other soldiers continued their search.

Further down they found Lt Proposch (who was conscious) and 20 feet (6 metres) further on Chaplain Graydon (who was also conscious). Both were given first aid and made comfortable. The fifth man, further down again, was already dead. The jeep was found lying in the creek bed, very badly smashed up.

Some time later, a doctor arrived and examined the injured men. After additional first aid was administered, the injured men were lifted out by means of a cradle. It was mid-afternoon by the time the last injured man was taken out. It had been a huge operation.

A full military Court of Inquiry into the circumstances surrounding the accident was conducted at Wau on 8-9 April 1943. Fifteen witnesses were called to give evidence at Wau. When he had recovered sufficiently, Lt Proposch provided a sworn statement from the hospital at Port Moresby. The report and findings of the inquiry were handed down on 23 April 1943.

The Court of Inquiry found no evidence of neglect, misconduct, carelessness or failure to observe any Act, Regulation, Order or Instruction on the part of any of the persons involved in the accident, deceased or injured. No other person caused or contributed to the accident. Both drivers were found to have acted appropriately. In particular, the Court commended the efficient action of Sergeant Hill who rendered prompt and capable medical attention, under most difficult conditions, to the injured men.

I don’t think people back home in Australia heard much about wartime incidents such as these, even when men died or were seriously injured.

Nor did they hear about the bravery of those who assisted in such incidents.

An article “Padre’s Escape; Jeep Over Cliff” appeared in Melbourne’s Argus on 21 April 1943 (page 5), two weeks after the accident. It’s mostly factual, although the lieutenant did not rescue the padre! Another article, “Hide and Seek in Jungle: Minor Clashes With Japanese”, which appeared in The Age (Melbourne, 21 April 1943, page 5), included a brief mention of the accident, emphazing only the lieutenant’s and the padre’s amazing escapes.

I find it surprising that newspaper reports of the accident were so brief, and made no mention of the three casualties. Was it because the relatives of those who died had not yet been notified?

The accident occurred on 7 April, but Lt Proposch’s parents (Charles and Elsie) were not informed until 9 days later.

They received an official telegram from the army on 16 April. It was followed the next day by a telegram from “Bill”, which read: “In hospital, accident, doing well.” His parents, clearly upset, wrote to him immediately (18 April). On 20 April, Charles and Elsie received two letters from Bill, one written on 4 April (prior to the accident), the other on 15 April, in which he wrote of the accident, his hospitalisation and recovery. His parents replied on 25 April.

On 27 April, another letter (dated 21 April) came from Bill, in which he reassured his parents he was “doing well”. Bill’s mother wrote two more letters during this period (on 29 April and 6 May). In her letter dated 6 May she included a newspaper cutting of the article printed in the Argus (mentioned previously). It was a very testing time for the family.

Lt Proposch was struck off the sick list on 17 May 1943. He returned to Wau and his role of Education Officer with HQ 17th Brigade. He remained at this post until September 1943. In November 1943, he was appointed Education Officer Captain and formally transferred to the Australian Army Education Service (AAES). He continued with the AAES for the remainder of his military service.

The following photograph was taken in August 1943, several months after the accident. It shows Lt Proposch lecturing troops on geopolitics at the Wau Aerodrome.

I think my father was well suited to the role of Education Officer.

The man I knew was scholarly, always interested in learning and understanding how people and the world “ticked”. When he joined the 2nd AIF in Melbourne in July 1940, he was halfway through a degree in economics at Melbourne University. And he was doing it the hard way – working as a clerk during the day and going to university at night. This is what he gave up to join the army.

It saddens me that my father didn’t tell me more about his work with the AAES during World War II. Perhaps I should have questioned him more. I wish I had shown more interest in his earlier life while he was still alive. He died in 1999.

The accident that occurred in New Guinea on 7 April 1943 had a profound impact on my father’s life.

The fact that Dad spoke about it often, for years afterwards, and marvelled at his survival, is sufficient evidence. I’m sure the knowledge that he miraculously escaped near certain death caused him to appreciate and value his life so much more than he would have if the accident had never happened. Some might say he was given a second chance at life.

I believe this “amazing escape” motivated him to make the best of every opportunity afforded him in his post-war civilian life. And he certainly did. After he was discharged from the army in December 1945, he never looked back. He was a driven man. 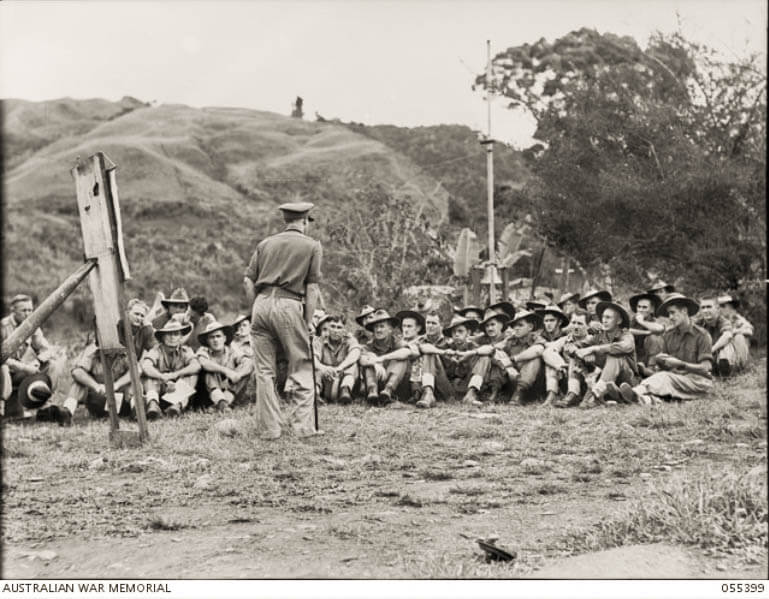