Are you looking for simple, no-fuss, wholesome desserts that will delight your family and woo your guests? Then I suggest you try these two quick and easy baked puddings: Nana’s Impossible Pie and Blueberry Bread and Butter Pudding. You’ll find my recipes at the end of this post.

Here are the reasons why.

Both puddings are quick and easy to prepare. No special skills or experience are needed. Their ingredients are inexpensive and readily available. The recipes are versatile – you can be creative, exchanging or omitting certain ingredients with success. Cooking time is relatively short, another plus. The puddings are wholesome and filling, attractive and delicious. Finally, they are equally enjoyable served either warm (straight out of the oven) or cold (they can be stored in the refrigerator for 3-4 days).

What you need to make these puddings:

Both puddings are cooked by baking in a convection oven. The prepared mixture is placed in a large shallow oven-proof dish, which may be round, square or rectangular. Nana’s Impossible Pie takes a little longer to cook than Blueberry Bread and Butter Pudding (45-50 minutes compared with 35-40 minutes). The puddings will be ready when the top is a light golden brown. Both require a moderate oven temperature.

I’ve been making these two puddings for more than 30 years.

I made my first Bread and Butter Pudding in the mid-1970s and Nana’s Impossible Pie for the first time in the late 1980s. These puddings are not new. The basic recipes are not new. In fact, in preparing this post, I decided to investigate the origin and history of these puddings. Where did they come from? When? In what form? How have they changed? You may be surprised to learn that one has a long history, the other comparatively short.

The story of Bread and Butter Pudding

Puddings (both sweet and savoury) have been enjoyed by people since ancient times. Bread pudding, in particular, has been made by cooks in the western world (where bread is a staple food) for centuries. Food historians tell us that the sweet bread pudding was devised by frugal cooks who didn’t want to waste stale bread.

Initially, the sweet bread pudding was very basic. It combined bread, milk and a sweetener. The bread was soaked in milk, a sweetener added, then the mixture was baked in an oven. Addition of fat, preferably butter, and dried fruit, such as currants, came later. This enhanced version of bread pudding became known as Bread and Butter Pudding. It combined bread, milk, sweetener, butter and dried fruit. Any kind of bread, whether sliced or in the form of breadcrumbs, was used.

Bread and Butter Pudding as we know it today originated in Britain in the 17th or 18th century. It combines buttered bread, a mixture of milk and eggs, sweetener and dried or fresh fruit (optional), with the resulting mixture baked in the oven. Essentially it’s a baked custard with the addition of bread.

A custard, by definition, is a mixture of milk and eggs thickened by gentle heating. Custards, which may be sweet or savoury, have a long culinary history. In Britain and France, for example, custards baked in a pastry shell (custard tarts) were popular as far back as the Middle Ages.

Spread some thin slices of bread with butter, lay them in a pie dish with a little sugar and half a cup of milk; let it stand an hour or two; beat two eggs with one cup of milk, pour over the bread and butter, and bake half an hour.

In preparing this post, I looked for Bread and Butter Pudding in the “Puddings” section of my mother’s 1934 and 1949 cookery books. It is not there. However, almost by accident, I discovered a recipe for “Bread Pudding” in the “Invalid Cookery” section of my mother’s 1934 cookery book! Perhaps that’s why neither she nor my grandmother made it as a family dessert. You only ate Bread Pudding when you were sick! I’ve included the recipe below. Note that it combines breadcrumbs, lemon-flavoured milk, one beaten egg, sugar and dried fruit, but no butter.

Cut the rind of half a lemon very thinly, and boil it in 1 pint of milk. Strain, and add 2ozs of breadcrumbs, 1 tablespoonful of powdered white sugar, and 2ozs of raisins, stoned and chopped; or preserved cherries, a little grated nutmeg, and a well-beaten egg. Mix thoroughly, and let it stand for an hour. Then put into a buttered pie dish, and bake gently for an hour and a half. Serve with custard or cream.

I think there is another reason why my mother never made Bread and Butter Pudding. As I recall, she used our leftover bread to make breadcrumbs, either soft or dry. To make soft crumbs (to stuff a chicken, for example), she would scrape the inside of the old bread with a fork. To make dry breadcrumbs she placed thin slices of bread on a tray in a slow oven, to dry out, then used a rolling pin to crush the dry bread into fine crumbs. In our household there was never any leftover or stale bread to warrant making Bread and Butter Pudding (or Bread Pudding).

What did other Australians think about Bread Pudding? I wonder. Here are a couple of quotes from Australian newspapers in the 1940s, which reveal attitudes towards Bread Pudding at the time:

“Bread pudding can be stodgy and uninteresting, but here is a recipe which will make new friends for an old dish.” (Melbourne’s Age, 1941)

“Duller than a dish of bread pudding! That expression was a favourite, but not anymore. Because we find bread pudding very, very interesting when its ingredients include brown sugar and cinnamon.” (Mudgee Guardian and North-Western Representative, 1943)

I made my first Bread and Butter Pudding in the mid-1970s.

By then this simple dessert was coming back into vogue. For me, at least, Bread and Butter Pudding was a novelty. I didn’t have any preconceived ideas about it. I found a recipe under the heading “Milk Puddings” in one of my earliest cookery books, a 1970 edition of The Coronation Cookery Book compiled by The Country Women’s Association of NSW. Through the eyes of an inexperienced cook it looked easy to make so I tried it. Success! I’ve used this recipe – and variations of it – ever since. Unlike my mother, I don’t make my own breadcrumbs. So, whenever I have leftover bread and I don’t want to freeze it I make Bread and Butter Pudding.

Recently I had to prepare a meal for guests at short notice. After deciding on the main course, I sought a dessert that is quick and easy to make, yet inviting and nutritious. Blueberries were cheap at the time and I had a punnet of fresh blueberries in the refrigerator. “Why not make Bread and Butter Pudding and use blueberries instead of sultanas? Blueberries will be a bonus,” I mused. “After all, blueberries are one of the top 10 superfoods.” Blueberry Bread and Butter Pudding was the result. Needless to say, this creation was a winner. Our guests loved it, I loved it, and so did my husband.

Compared with Bread and Butter Pudding, which has a long culinary history, the Impossible Pie is a relatively recent invention. It originated in the United States of America (USA) in the second half of the 20th century. The exact date is not known. According to the Food Timeline, the first recipe for an Impossible Pie was published in the USA in 1968. Like the early puddings, an Impossible Pie may be sweet or savoury.

Why is it called an “Impossible” Pie (or “Mystery” Pie)?

It’s because the ingredients used in making an Impossible Pie, when mixed and poured into a pie dish, miraculously settle during baking into a pie formation: crust and filling. This is the mystery of the “Impossible” Pie.

The Impossible Pie was popularized in the 1970s and 1980s by two American food manufacturing companies, General Mills (home of Betty Crocker products and Bisquick) and General Foods (now Kraft). It began with General Mills providing recipes for various versions of Impossible Pie on its Bisquick packaging. Bisquick is an all-purpose baking mix invented in 1930 by the General Mills corporation. One cup of Bisquick is equivalent to a mixture of 1 cup of plain flour, 1½ teaspoons of baking powder, ​½ teaspoon of salt and ​2½ tablespoons of oil or melted butter.

In 1976 General Foods adapted the basic formula of the Bisquick Impossible Pie to produce its Amazing Coconut Pie. It was a sweet pie, with coconut and raisins two of its ingredients. This version of the Impossible Pie soon became very popular among home cooks in the USA.

Nana’s Impossible Pie, like Bread and Butter Pudding, is a custard-based baked pudding. The main difference, however, is that during the baking of Nana’s Impossible Pie the ingredients separate to form its three distinct layers: soft pastry base, luscious custard centre and crunchy coconut top. It really is quite amazing! From the first time I made this wonderful dessert, I was won over. I’ve lost count how many times I’ve made it since then.

This post is a sequel to Fail-Me-Never Steamed Pudding (August 3, 2016), which was also about puddings. In that post I listed puddings my grandmother and my mother made and my favourite puddings (including Bread and Butter Pudding and Nana’s Impossible Pie). There you will find my mother’s recipe for Fail-Me-Never Steamed Pudding, a wonderful fool-proof pudding that is cooked in a basin over a steam bath. It’s just perfect for this time of year. Just click on the link to access the story and recipe. 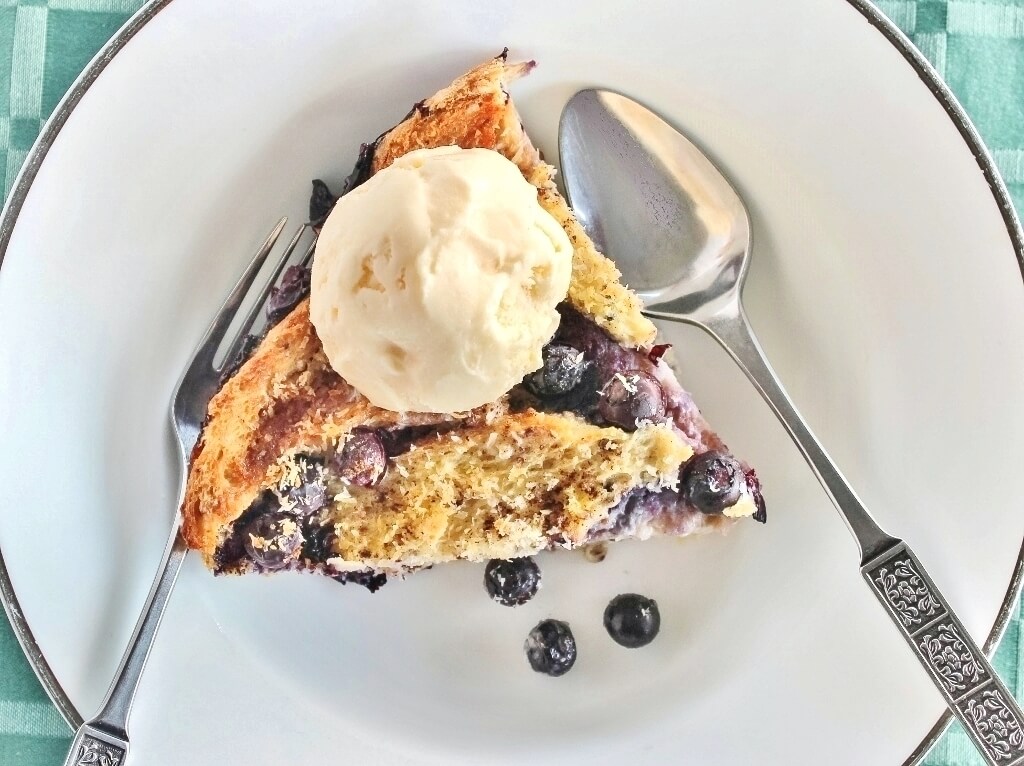