My husband and I visited Croatia in mid-December 2004. It was my first visit, but not so for Tony. He was returning to his homeland after an absence of more than 40 years! Having just 7 days to spend visiting Split, Dubrovnik and Korčula, all in Dalmatia and with connections to Tony’s family and early childhood, time was of the essence.

Just how much excitement can you fit into 24 hours?

Tony and I travelled by coach from Split to Dubrovnik, arriving at the main bus station at Gruž Harbour at about 2 o’clock in the afternoon on Friday 17 December 2004, just 8 days before Christmas. It was a dull day, overcast and cool. We had booked our overnight accommodation at Hotel Lero, a 3-star hotel located in the centre of the city. We chose this hotel because it was not far (1.2 km or 15 minutes by foot) from the Old Town.

Given our brief sojourn in Dubrovnik, we were keen to explore as much of the Old Town as we could in the limited time available to us.

We had read that the Dubrovnik Symphony Orchestra was a fine orchestra, so we hoped to get tickets for a Christmas Concert that night. We inquired at our hotel; the receptionist phoned and tried to get us tickets, but in vain. The concert was sold out. We were very disappointed. She suggested we try one of the tourist agents in the Old Town, in case there were cancellations. We thought that was a good idea. We headed off to the Old Town, catching a local bus from just outside our hotel, intending to have a quick tour of the town, dine at a traditional Dalmatian restaurant and end the evening by attending the symphony concert. (We still hoped to get tickets.)

Tony was very emotional as we approached the western entrance to the Old Town, Pile Gate. Just being there, in that place, brought back both poignant and happy memories of his childhood. Tony’s brother was born in Dubrovnik. Tony would have visited Dubrovnik on a number of occasions. He and his family lived in Korčula, about 3 hours by road and ferry north west of Dubrovnik, on Korčula Island just off the coast of Southern Dalmatia. Korčula, the main township on the island, where Tony was born, is sometimes called “little Dubrovnik”, as it is also boasts a medieval stone walled town, but on a smaller scale.

The outer Pile Gate, which dates from 1537, is accessed via a stone foot bridge. At the end of the bridge is a wooden section. In former days, it was a drawbridge, opened daily to allow entry to the town during the day; it was closed at night. In a niche above the Renaissance archway there is a statue of St Blaise, the patron saint of Dubrovnik.

It was mid-afternoon when we entered the Old Town. We headed down the wide, shiny limestone-paved main street, Placa (or Stradun). There was not a car in sight – none are allowed in the Old Town. Everyone was on foot. Being winter time, there were not too many tourists about and the street was almost empty.

We took this photograph the following day, from a vantage point high above the Pile Gate, on the western wall. On the left is the Franciscan monastery and museum. Luža Square, the main town square and former market place, with its dominant Clock Tower, is located in the distance, at the end of the street.

This scene is very different from the one pictured in the next photograph from the family archives. Taken about one year before the family migrated to Australia, it shows Tony (“Ante”) with his little brother Dušan in Luža Square at the end of the Placa. It was summer-time, and there were plenty of people about. The children were enjoying the warm sunshine and an ice-cream. They are pictured surrounded by pigeons, with the spire of the Franciscan monastery clearly visible in the background.

Recall that we were on a quest: to buy tickets for the Dubrovnik Symphony Orchestra’s Christmas Concert.

Eventually we found a shop that sold the tickets, but there were none left. Tony spoke the local language, and the shop attendant told us about the series of community Christmas Concerts which were held at various sites in the Old Town throughout December. He recommended one of these as an alternative. Tonight’s concert was to be held in St Blaise’s Church, situated in Luža Square, commencing at 7.00 pm. And it was free!

Before the concert, we explored some of the Old Town, walking as far as the northern entrance (Buža). Outside, in the carpark, one can gain some idea of the height (up to 25 m) and width (up to 6 m) of the walls surrounding the town. The round Minčeta Tower, located atop Fort Minčeta at the highest point on the wall, is visible in this photograph. In medieval times, Fort Minčeta, one of the wall’s strongholds, protected the town from land invasion (on the northern side).

At the foot of a huge stone stairway in a steep narrow street called Boškovićeva, at the centre of the Old Town, we found Dubrovaki Kantum. This is a small mid-range restaurant which serves traditional Dalmatian fare. From the menu we chose Šporki Makaruli, or Dirty Macaroni, a dish that Tony’s Mum often made. We wanted to sample the local version and we were not disappointed: it was a hearty, delicious winter-warming meal.

With full stomachs, and feeling a little tired after an exhilarating day, we walked briskly in the cold evening air to St Blaise’s, not wanting to be late for the community Christmas Concert. We were not sure what to expect; little did we know what was in store for us.

The present-day St Blaise’s Church dates from 1715. It replaced a 14th century Romanesque church which was badly damaged in the Great Earthquake of 1667 and destroyed completely by fire in 1706. It is built in extravagant Venetian Baroque style, in the form of a Greek cross, topped by a distinctive dome. A large, wide imposing staircase leads to the front porch and church entrance. Inside, the building is furnished in typical Baroque flamboyance and attention to detail. Noticeable is the check-patterned tiled stone floor. The altars, huge pillars and doorframes of white marble are particularly impressive.

We arrived early, and found seats in a front-row pew. We were fascinated as we looked around and tried to take in the many facets of this magnificent building and its furnishings. The performers were getting ready. I remember feeling a little excited about being there. Tony went and asked for a program.

When Tony and I saw the program, we could not believe our eyes! We were overcome with joy and excitement; it felt like our hearts would burst! The Christmas Concert that night was being presented by three groups from Korčula Island: a mixed church choir “don Jakov Salečić”, a men’s vocal group “Smokvica” from Smokvica and a young men’s vocal group “GUC” from Korčula. But that was not all: The conductor of the choir was Ivan Salečić, Tony’s second or third cousin! Tony’s parents were born and grew up in Smokvica, a village of about 1000 inhabitants, 30 km from Korčula (where Tony was born and grew up) on Korčula Island. It was highly likely that a number of these performers were related to Tony in some way!

The concert exceeded our expectations! With each of the group performances, it was clear to us that singing is a much-valued activity of the people of Korčula Island – it all seemed so natural and easy for them. Most of the performers were not professional musicians, but it was certainly not evident. For example, the performance by the young men of group GUC (pictured), singing acapella, was just breathtaking. For Tony, who loves to sing and on a number of occasions has organised a men’s singing group in church, their performance was just inspirational! Now he could understand why his father and mother often used to sing, and loved singing, and why he grew up loving music and song.

We were never meant to go to the symphony concert that night! We came to that conclusion straight away. No performance by the Dubrovnik Symphony Orchestra, no matter how excellent, would have touched our hearts in the same way this concert did. This concert was personal. After the performance, Tony introduced himself (and me) to the conductor, other cousins, and some of the performers.

They were just as surprised as we were that we were there that night to witness their Christmas Concert. Once a year, the groups travel the 3+ hours from Korčula to participate in Dubrovnik’s Christmas celebrations. We all acknowledged this appointment as God-ordained. It was even more surprising to them when we told them we were travelling to Korčula the next day!

It’s a wonder that we slept at all that night, with all the excitement! Back at our hotel, we continued to marvel and praise God as we recounted the course of events, and the climax, of the day.

The next morning we were up bright and early, as we still had much to see and do before we left Dubrovnik later that day. The 2 km walk along the top of the walls of the Old Town was on the top of our “must do” list. We also planned to take a bus ride through the suburbs of the new city to the top of Srd Hill.

Finding ourselves once again in the Old Town, on the famous promenade Placa, we called into the Tourist Information Centre, bought tickets for the wall walk, and picked up a copy of the “Dubrovnik Events” brochure (pictured). To our surprise, we found the “Christmas Concert from Korčula Island” advertised (and commencing at 20:00!). I wonder how things may have been different if we had known about this concert before the event.

Our first stop-over was the Franciscan monastery complex. It dates from the 14th century. According to our Lonely Planet guide to Croatia, this is one of the most beautiful late-Romanesque structures in Dalmatia. We ventured inside to inspect its famous pharmacy, acclaimed as one of the oldest functioning pharmacies in Europe.

Feeling confident about his Croatian language skills, Tony entered a café along the Placa, to ask the barista for some more information. The two men exchanged a few pleasantries in both languages. All was going well until Tony said in English, “My Yugoslav is not so good…” The local man, seated on a stool behind the bar, immediately stood up and retorted angrily, with emphasis, in English: “We are Croatians!”

Feeling chastened, Tony agreed and apologised. (When Tony was born, and when his family left their homeland, it was called Yugoslavia; in 1992, Croatia split from the Yugoslav confederate, and became an independent republic.)

Tony and I promptly left the café and headed towards the eastern end of Placa, to begin our wall walk. It was about 10 o’clock in the morning. 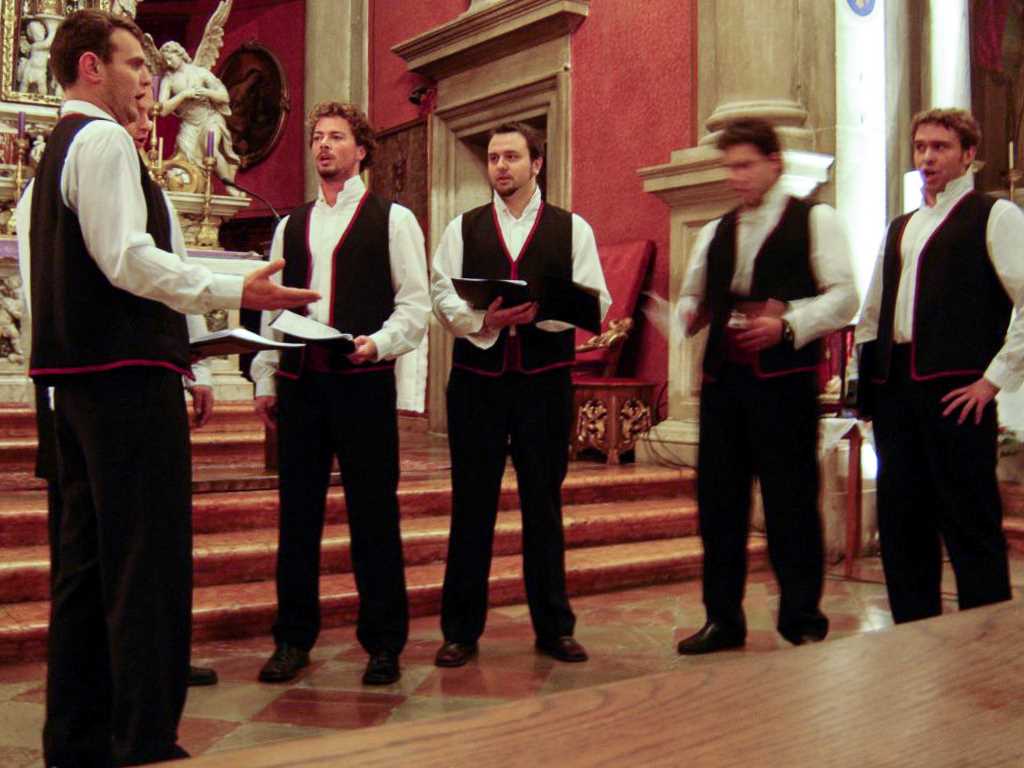