Yesterday afternoon Tony and I were privileged to attend Alwyn and Fay Neuendorf’s 60th wedding anniversary celebration. Alwyn and Fay were married at Balimo in the Western Province of Papua New Guinea on October 4, 1956.

Many members of Alwyn’s and Fay’s large extended family, and friends, attended the function at North Pine Baptist Church, Alwyn’s and Fay’s home church. To begin proceedings, Alwyn introduced and said a few words about each family member present. Of their children, Laevai, Pate and Kevin were able to come; Tom and Rupa sent apologies. Alwyn’s sister Merle, from Melbourne, was among those who attended.

Following afternoon tea and a time of mingling, we enjoyed a PowerPoint slideshow depicting highlights of Alwyn’s and Fay’s 60 years together. Before Alwyn and Fay cut their 60th wedding anniversary cake, Kevin Neuendorf (Master of Ceremonies) read four special greetings. These were messages of congratulation from the Honourable Peter Dutton (local Member of Parliament), the Honourable Malcolm Turnbull (Prime Minister of Australia), His Excellency Sir Peter Cosgrove (Governor-General of  Australia) and Her Excellency, Queen Elizabeth II.

During our time together, we sang a few of Alwyn’s or Fay’s favourite hymns. These included: “How deep the Father’s love for us”, “The church’s one foundation”, “The old rugged cross” and “Beneath the cross of Jesus”. Each song reminded us of Alwyn’s and Fay’s enduring faith in our Lord Jesus Christ.

Several speakers testified to Alwyn’s and Fay’s loving, godly and faithful service during their 40 years of ministry in Papua New Guinea. The first was Professor Betty Lovai (Executive Dean, School of Humanities and Social Sciences, The University of Papua New Guinea). Alwyn introduced Betty as his Gogodala “niece”.

Betty described Alwyn’s and Fay’s  contribution to the nation, the Gogodala people and four generations of her family, as “priceless”. She spoke much about the role Alwyn played in bringing the Word of God to her people, beginning with her grandparents. Betty concluded by saying to Alwyn and Fay: “Your legacy will live on.”

Ganjiki Wayne, one of Alwyn’s and Fay’s 26 grandchildren, spoke on their behalf. He praised his grandparents for their wisdom and enduring godly example. Ganjiki described their relationship, which is as strong as ever, despite the passing years. When he is old and frail, Ganjiki wants to be just like them: uncomplaining, appreciative and still loving life. Speaking for all the Neuendorf grandchildren, Ganjiki declared, “We are all proud to be Neuendorfs.” He thanked his grandparents for encouraging them in the pursuit of excellence.

Walo Wayne, Ganjiki’s older brother, played guitar and led the grandchildren in a beautiful song in honour of their grandparents.

Kevin Neuendorf spoke on behalf of Alwyn’s and Fay’s five surviving children. He acknowledged the passing of brothers Andrew and Tinoi, who are now “with the Lord”. Kevin was emotional as he recalled the way Alwyn and Fay brought each one into their home at various stages in their teenage years. He said that Alwyn and Fay nurtured and disciplined them, and taught them to live a practical Christian faith at home and in the marketplace.

Kevin read extracts from Alwyn’s autobiography “Open Your Mouth Wide”, where Alwyn described how he met Fay, proposed, prepared a home for his bride, celebrated their wedding day and spent their first furlough in Australia.

Alwyn Neuendorf responded. He shared a little of his and Fay’s ministry during their 40 years in Papua New Guinea and what they have been doing during their retirement in Australia. (I have written about this previously in The Neuendorf Connection.) Alwyn testified to God’s goodness and faithfulness to them every day of their long lives together. Now 88, Alwyn said he still “has fire in the belly” and hopes he can continue to serve the Lord in his teaching ministry for a few more years.

Our Neuendorf connection: Alwyn and Fay

It was wonderful to be part of Alwyn’s and Fay’s special day. Tony and I appreciated being invited to this celebration, which honoured Alwyn’s and Fay’s “sixty years of faith and obedience together in Christ” (to quote the words of Laevai’s invitation).

Tony brought his old book of quotes to show Alwyn the text he gave us so long ago (12/11/1974). I wrote about this in The Neuendorf Connection (April 23, 2016). Alwyn’s words meant a lot to us at the time and we have never forgotten them:

God has a point of view for every situation we face. The Bible presents God’s point of view. Christianity is not a myth or a theory, it is a way of life.

Seeing these words yesterday, Alwyn confirmed, “Yes, I would have said that.”

Our Neuendorf connection: The next generations

During the afternoon, Tony and I reacquainted ourselves with Kevin and Pate, both of whom we hadn’t seen for years (Kevin 29 years, Pate 41 years). We met Kevin’s wife, Numa, one of my lovely Facebook friends. We spent some time with Laevai and his wife Setae (whom we met with earlier this year). I was thrilled to meet in person many of my dear Facebook friends, from the third generation of Neuendorfs: Fay Abe-Neuendorf, Ao’Ralema Neuendorf-Molok, Ganjiki Wayne and Walo Wayne. And yesterday I gained two new Facebook friends, Haidi Wanya, the daughter of our late friend, Andrew, and Raphie Molok (husband of Ao’Ralema)! 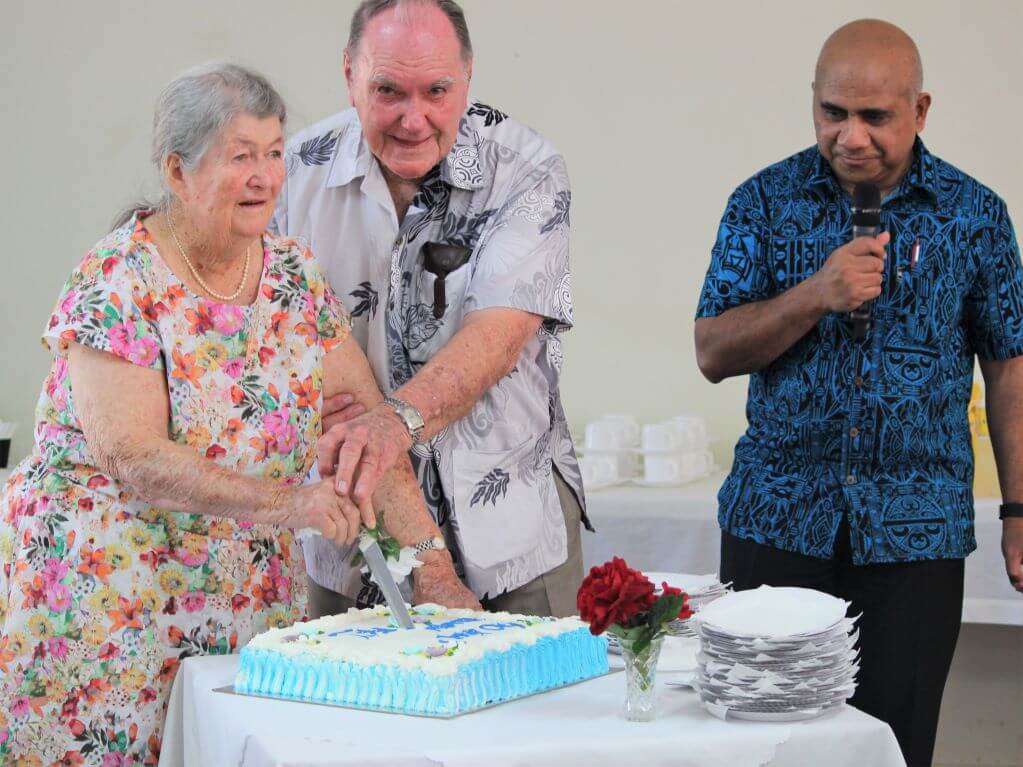 5 thoughts on “A 60th wedding anniversary”