A mother’s love (and a little black diary)

This story, set in World War II, is about a mother’s love for her sons. As you will discover, this love inspired the title of my short story blog “Love in a little black diary”.

It is said there is a special bond between a mother and son.

Elsie Antonia Proposch had three sons. William, my father, was the middle one. I’m sure that Elsie had a special relationship with each of her sons, my dad included. I have proof: Elsie’s “little black diary”.

It was 3 September 1939, just 21 years after the end of World War I, The Great War or “war to end all wars”. Australia’s Prime Minister, Robert Gordon Menzies, announced to the nation that Australia was (once again) at war with Germany:

Fellow Australians, it is my melancholy duty to inform you officially, that in consequence of a persistence by Germany in her invasion of Poland, Great Britain has declared war upon her and that, as a result, Australia is also at war. No harder task can fall to the lot of a democratic leader than to make such an announcement.”

(Extract from speech made by Prime Minister Menzies on 3 September 1939.)

On 15 September 1939, following the declaration of war, the Australian Government announced it would raise a special volunteer force of 20,000 men, independent of the regular defence force, for service in Australia and abroad. This force was dubbed the Second Australian Imperial Force (2nd AIF).

In a time of war, it must be a mother’s greatest fear that her son, or sons, will be conscripted to serve in the armed forces.

I’m sure this would have been the case for Elsie. Two of her sons, Eric and William, were old enough to go to war.

Sure enough, on 18 June 1940, at the Melbourne Town Hall, Elsie’s second son William enlisted in the 2nd AIF. He commenced service on 18 July 1940. William was a volunteer. At the time he was working in the city with a firm of accountants, as a clerk or an assistant accountant. He was studying economics at The University of Melbourne, at night. William’s decision to join the AIF was to be a life-changing one for him and his family.

From the time William (“Bill”, or as Elsie called him, “Billie”) received his first posting, Elsie followed and recorded his every movement.

Perhaps her earliest records are the notes she made on the reverse side of a photograph William sent her from the Bonegilla (Victoria) army training camp. The photograph shows a Union Jack with signatures of all the men who attended the camp at the time – “W.E. Proposch” is found under the heading “BHQ” (Battalion Head Quarters). Her notes show that Bill returned home on leave before he was posted to Darwin. She wrote: “Billie left here Monday 10th March 1941 for Bonegilla Camp” and “Billie left Bonegilla Saturday 22nd March 1941 for Darwin”.

In the meantime, Bill’s older brother Eric also volunteered for army service. Elsie recorded: “Eric joined AIF 31st July 1941”. Now two of her three sons were involved in Australia’s war effort, and one was about to leave for active service abroad. Elsie’s notes (which are verified by Bill’s army records) record that Bill remained in Darwin until he received his first overseas posting. Bill returned home on leave from 11-27 October 1941, embarking in Sydney on 1 November 1941 for the Middle East.

This must have been a worrying time for Elsie and the family.

The following photographs of Bill and his brother Eric were taken during Bill’s leave in October 1941. I’m sure Elsie treasured these photographs.

Charles, Elsie’s husband, worked as a commercial artist, at the time producing drawings for advertisements of merchandise sold by Melbourne’s major department stores. In his leisure time, he liked to paint, especially in oils. One painting Charles produced during that period depicts Elsie with one of her sons in army uniform outside a tent pitched in the countryside. Obviously, the family tried to spend quality time together when the “boys” were on leave.

Bill’s mother Elsie was a great correspondent. I have written previously about this in Nana in Melbourne: Joy and a joy-giver. Importantly, I possess Elsie’s 1941-1944 diary, the “little black diary”, passed down to me via my father. It’s a precious item in my collection of family history artifacts.

In her diary Elsie recorded the dates of all letters and parcels she and Charles sent their two sons during their army service, from late 1941 to the end of 1944. She also recorded the dates of all letters and telegrams they received from their sons, and details of official telegrams they received from the army during this time. It is a comprehensive and awe-inspiring record of a mother’s love.

Bill served a total of 1968 days (nearly 5½ years) in the 2nd AIF. He spent 689 days (nearly 2 years) in active service in Australia (Darwin) and overseas. His three overseas postings were:

Elsie or Charles, but mostly Elsie, wrote a letter to Bill once a week on the average during his overseas service. Without fail. And Bill replied every other week. Elsie wrote regularly to Bill when he was in Australia, too. The “little black diary” reveals 10 different addresses for Bill during his army service! Most are crossed out, because the addresses kept changing as Bill received a new posting.

Like all mothers, Elsie was proud of her sons’ achievements. On 26 January 1943 Bill wrote to his parents to report he had received his commission a couple of weeks earlier, on 9 January. Elsie recorded this in her diary. Bill, Acting Lieutenant, was seconded to the Australian Army Education Service (AAES) as an Education Officer based in Wau, Papua New Guinea.

A mother’s love: The pain of separation

What Elsie’s “little black diary” does not reveal is the heartache or yearning she must have felt every time she wrote to her sons or received a letter or telegram from them. The record is almost exclusively a list of numbered items and dates. However, I believe that the act of keeping this record reveals the extent of Elsie’s love for her sons.

Little did Elsie guess when Bill enlisted that, after the war, he would not return to live in Melbourne.

After leaving the army at the end of 1945, Bill settled in Rockhampton (Queensland), 1250 miles (2000 km) away! It’s a good thing we don’t know the future. I think this knowledge would have been too painful for Elsie to bear.

On one occasion when on leave in Brisbane, Bill met Evelyn. They met at a dance in the Brisbane City Hall. Evelyn was serving with the WAAAF (Women’s Auxiliary Australian Air Force) and was based in Brisbane at the time. She was a “country girl” from Queensland, with a farming background, in contrast to Bill, whose experience was of urban city life, accountancy, books and study. How different is that! Nevertheless, the attraction was immediate and mutual.

Elsie recorded in her diary that Bill and Evelyn announced their engagement on 5 September 1944.

Bill was on leave at the time, visiting Evelyn who had been posted to Rockhampton. Following the engagement, Elsie and Evelyn began to exchange letters, as recorded in Elsie’s “little black diary”.

Bill married Evelyn at St Paul’s Cathedral, Rockhampton, on 26 March 1945. Sadly, none of Bill’s family, including Elsie and Charles, were able to attend. How this must have grieved Elsie. Bill was the first of her three sons to wed. It was still wartime and Bill married in his Army dress uniform.

Elsie and Charles met Evelyn when the newlyweds travelled to Melbourne a few months after their wedding.

It was a happy occasion. Evelyn would often recount how her father-in-law escorted them into his studio, strode over to his easel and ceremoniously unveiled a painting of Bill and Evelyn. What a special wedding gift!

Charles had faithfully reproduced their portrait from the 6” x 4” black-and-white photograph the couple sent Elsie and Charles following their engagement. Charles’ painting, oil on canvas, is one I have known all my life. It’s a striking likeness of my father and mother. But there is one significant difference.

Did you spot the difference?

Bill has a cigarette in his left hand in the photograph, but it is omitted in the painting. According to Bill, his father did not approve of his smoking cigarettes, so chose not to include it!

The hardest test of a mother’s love

I don’t think I can understand how much sadness Elsie felt when Bill settled so far away after the war. As far as I am aware, Elsie saw Bill and Evelyn in person three more times in her lifetime: when they visited Melbourne after their marriage in 1945, after the birth of their first child in 1946, and when Charles and Elsie visited Rockhampton in 1954. That’s all.

My father knew about his mother’s wartime diary and, following Elsie’s death, asked his father if he could have it. Charles obliged.

For Bill, Elsie’s “little black diary” was a great prize, testament to his mother’s love, the love Elsie had for him and his brothers. 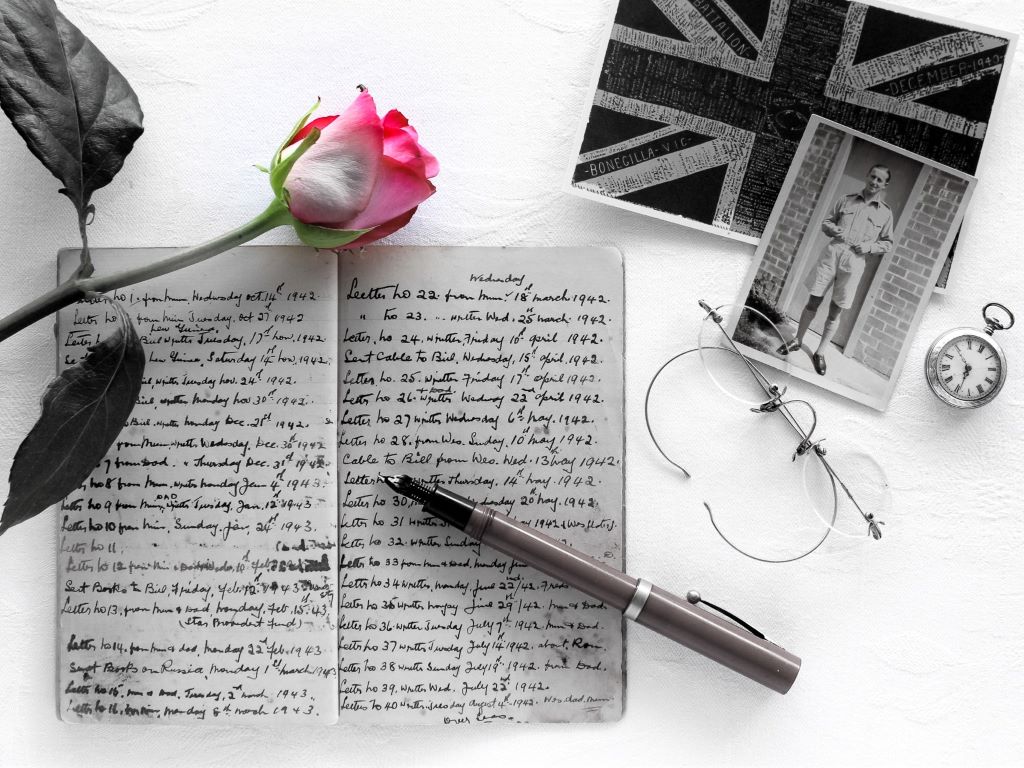