At the end of this post, you’ll find my recipe for Crusted Savoury Beef. I rediscovered the recipe for this delicious beef mince pie when I was scouring through my collection of recipe books. The recipe is not new. It dates from the early 1980s. Given that rolled oats is one of its main ingredients (in the savoury beef filling and the crust), I suspect I found the recipe on a packet of Uncle Toby’s Oats.

Crusted Savoury Beef is a homemade family beef pie. But it’s not a traditional pie. It has no pastry base, only a thick, light and tasty crust on top of the filling. It’s prepared by placing the cooked savoury beef mince in a large, flat oven-proof dish, covering the meat with a soft batter, then baking the combination in the oven.

What do you know about pies? What’s a “pot pie”? When were the first meat pies made?

I’ve discovered that in Britain there’s strongly divided opinion among lovers of all things pastry as to what constitutes a pie. You may like to read: When is a pie not a pie? Some insist a pie filling (sweet or savoury) must be fully encased in pastry (base, sides and lid). Otherwise, in their expert opinion, it’s not a pie.

Pie-making is not new.

The ancient Romans made the first pies, encasing meat inside a kind of pastry made from flour and oil. Pie-making has long been part of Britain’s culinary history. Meat pies were first made in Britain in the middle ages.

In Australia, from the early days of British settlement, people have been making meat pies, commercially and at home. From my childhood days I remember fondly my mother’s signature Steak and Kidney Pie, topped with her melt-in-the-mouth homemade short pastry. How I have often sought to replicate my mother’s Steak and Kidney Pie!

I love meat pies. I always have.

When I attended primary school (in the 1950s and 1960s), once a week my mother would give me money to buy lunch at the school tuckshop. That was a real treat. Of course, I always bought a meat pie: an iconic Aussie meat pie, with peas. In those days, meat pies almost always came with a spoonful of mushy peas in the filling. The pie was placed in a brown paper bag. I can still recall the joy of consuming a hot meat pie with peas for lunch at school, winter or summer.

When in Britain, one must try a pie or two…

My husband and I recently returned to Australia after spending eight weeks in Europe, visiting our family there. During our stay, we spent two weeks in Britain.

Now, I am aware that the British, like Australians and New Zealanders, love their pies. So, while in Britain I made it my mission to sample a couple of different British meat pies, ones that I had not tried previously.

The first was a Steak and Ale Pie.

I chose a Steak and Ale Pie as part of a light meal during our stay at Chester (Cheshire, England). To be honest, I was taken aback when my order arrived. The “pie” was in fact an individual “pot pie”: a beef stew served in a breakfast cup size ceramic dish with a small piece of flaky pastry placed on top of the dish (like an afterthought). It was not what I expected. The Steak and Ale Pie was served hot with potato chips and green peas. I’m sure the pastry purists in Britain would not call this a “pie”.

The second was a pork pie.

My husband and I decided to have pork pies for lunch during our visit to Ironbridge (Shropshire, England). We purchased two pork pies from Eley’s of Ironbridge, a shop located on top of Tontine Hill, over the road from Britain’s iconic Iron Bridge (built in 1781 and still standing, the first bridge in the world to be made of cast iron).

Eley’s of Ironbridge have been making their pork pies in the same manner and using the same recipe for over 50 years. The squat cylindrical pies comprise a solid pork meat filling completely encased in a firm thick pastry. Jelly is added to the filling and the pastry is glazed after the pies are cooked. If you’d like to find out how they’re made, click HERE. Much to our surprise, my husband and I discovered that the famous Eley’s Pork Pies, which are both tasty and satisfying, are best consumed cold!

Crusted Savoury Beef is a homemade family beef pie. Strictly speaking, it’s a pot pie. The meat is not fully enclosed in pastry: The pie has no pastry base or sides, only a pastry “lid” or topping. Unlike the two pies I sampled in Britain, it’s a large pie, for 4-6 people. To serve, the pie is cut into serving-size pieces. And, in contrast to the pork pie, Crusted Savoury Beef should be consumed piping hot, straight out of the oven.

Here are the reasons why I think you’ll love this pie and use the recipe over and over again:

#  The filling uses minced beef as its base. I recommend using lean beef mince. The bacon may be omitted if desired.

#  Although savoury, the beef filling is not too hot or spicy, so it is suitable for children. If unsure, when you try the recipe the first time, omit the chilli powder.

#  The filling is thickened with rolled oats and rolled oats is one of the main ingredients of the pastry crust. Rolled oats, a “superfood”, is a natural foodstuff containing a high concentration of nutrients, including anti-oxidants. I’ve written about the health benefits of rolled oats previously, in Make your family a treat: Bircher Muesli (July 10, 2017).

#  The pastry crust is nutritious, tasty and light. It’s not at all fatty. Besides rolled oats and flour, it comprises a finely chopped onion, salt and pepper, milk, yolk of an egg, olive oil and a stiffly beaten egg white.

#  Once the savoury beef is cooked, placed in a large oven-proof dish and covered with the soft batter, the pot pie takes only 30-35 minutes to cook in the oven. 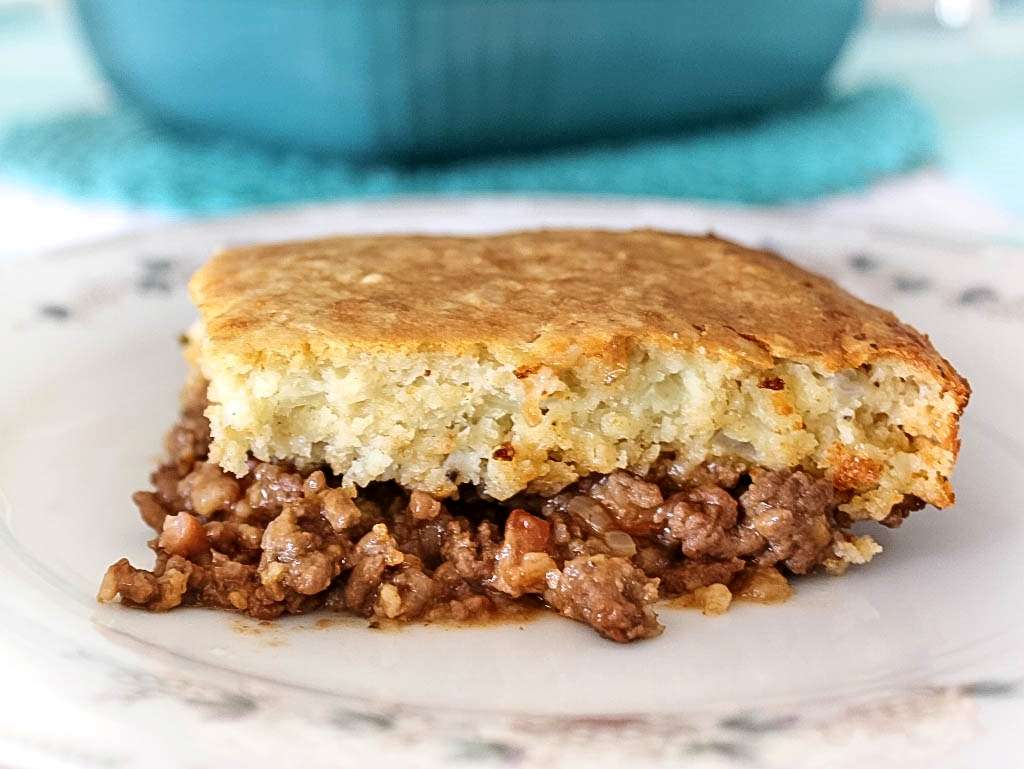