For love of bread: The Isisford Bakery

A funny thing happened when my husband Tony and I visited Isisford last year and Tony spied a bakery in the main street of this tiny remote Queensland town.

Isisford is located in the Longreach Region of central western Queensland. It’s 117 km south of Longreach via the Isisford Ilfracombe Road, 123 km west of Blackall and more than 1000 km by road northwest of Brisbane. The township, which lies on the banks of the Barcoo River, was established in the 1870s. At the 2016 Australian census, Isisford’s population was 218.

It was Thursday 7 December. The day was clear, dry and sunny. In fact, the sunlight was so bright, it was almost blinding. The temperature was about 40 degrees Celcius, not unusual at this time of year. After all, it was summertime. The bitumen surface of the road shimmered in the heat and the ground was hot under foot as we stepped out of our air-conditioned car.

A few vehicles were parked in St Mary Street (the main street) but there was not a soul in sight. We parked our car in front of the former Bank of New South Wales and strolled along St Mary Street checking out the town’s historic buildings, photographing them and reading their stories. I popped into a little grocery store (“Isisford Welcome Mart”) to buy ham and a tomato to put on our bread rolls for lunch.

Tony and I returned to our car then drove the short distance along the Isisford Blackall Road to the Barcoo River. It was about 1.45 pm. By this time we were tired, edgy and hungry. We were looking for a green, shady spot where we could sit and eat our lunch. Dare I say we didn’t find one by the “river” (it was just a dry bed).

So we drove back to town.

It was then that Tony spied the bakery.

The neat little timber building, with the single word “Baker” displayed above the awning on the shop front, was located at the eastern end of St Mary Street. We hadn’t noticed it before.

Tony: “Look! The bakery’s open. I’d like to buy some bread for lunch. A bun or something.”

Me: “But we already have lunch. We have buttered bread rolls and I’ve bought ham and tomato to go on them. And there’s fruit. We have plenty of food.”

Tony (defiantly): “Didn’t you hear me? I want to buy some bread. You know Croatians like their bread.” He got out of the car and started to walk towards the bakery.

Me (calling out): “I think you’re just being greedy. You don’t need it. Anyway, you’ll probably have to use cash there. If you want it, I have a $50 note.”

Tony returned to the car. Holding out his hand, he said (forcefully): “Please give me the money!”

Tony strode over to the bakery while I sat in the car, fuming.

I watched as Tony disappeared into the little shop. He wasn’t inside very long when he reappeared at the doorway, with the largest smirk across his face. He was still clutching the $50 note. He signalled to me to come over. Reluctantly I got out of the car. “What’s Tony’s problem?” I thought. “What does he want now?”

I soon found out.

The bakery is a museum!

The bread in the shop window is not edible. Imitation bread set out neatly on the window shelf, a dummy shop-assistant standing behind the counter, and an old cash register, antiquated scales and visitor’s book on the counter. These are the things Tony encountered when he entered the “shop”.

Together we discovered there was more to see out the back of the “shop”. There, the baker’s work area, baking equipment and oven were on display, complete with a dummy baker overseeing the operations.

Oh, dear. Talk about Tony having to eat “humble-pie”! His determination to buy bread from this shop (despite my protests) had come to nought! Amidst our amusement, Tony confessed he had been completely “taken in” by the shop and its realistic window display. Of course, I was very gracious (!!) and tried awfully hard not to “rub it in”.

Clearly, this entire incident involving the baker’s shop was a real-life comic drama (and we were the unwitting players)!

All for love of bread.

This bakery was not the town’s first.

Isisford’s first bakery was located elsewhere in the town (the building has long gone). Today, the site is marked by a sign displaying the following information:

“A Chinaman named Ah Sue was alleged to be Isisford’s first baker, from the early 1890s through to 1926. Over the years he was assisted by two off-siders, one named Hong Fah and the other named Harry Fong Sang. Ah Sue was followed by another Chinaman named Jimmy Gun Bow who baked there until the late 1930s. These bakers would leaven their bread with homemade yeast made from fermented potatoes. … During the 1930s Mrs Atherton purchased the bakery and employed a baker by the name of Tom Hutton of the well-known bakery family of Huttons of Yeppoon. He passed his knowledge to Henry Costin who continued as baker until the 1940s.”

Our visit to Isisford ended as it began: happily. After the bakery drama, Tony and I found a pleasant, green, shady spot where we were able to sit down and enjoy our lunch: Isisford Town Park, off St Helena Street. We can recommend it to other visitors. It’s fully grassed, clean and well-maintained, with tables and seats under cover, drinkable water, a toilet and shower block, and a children’s play area. 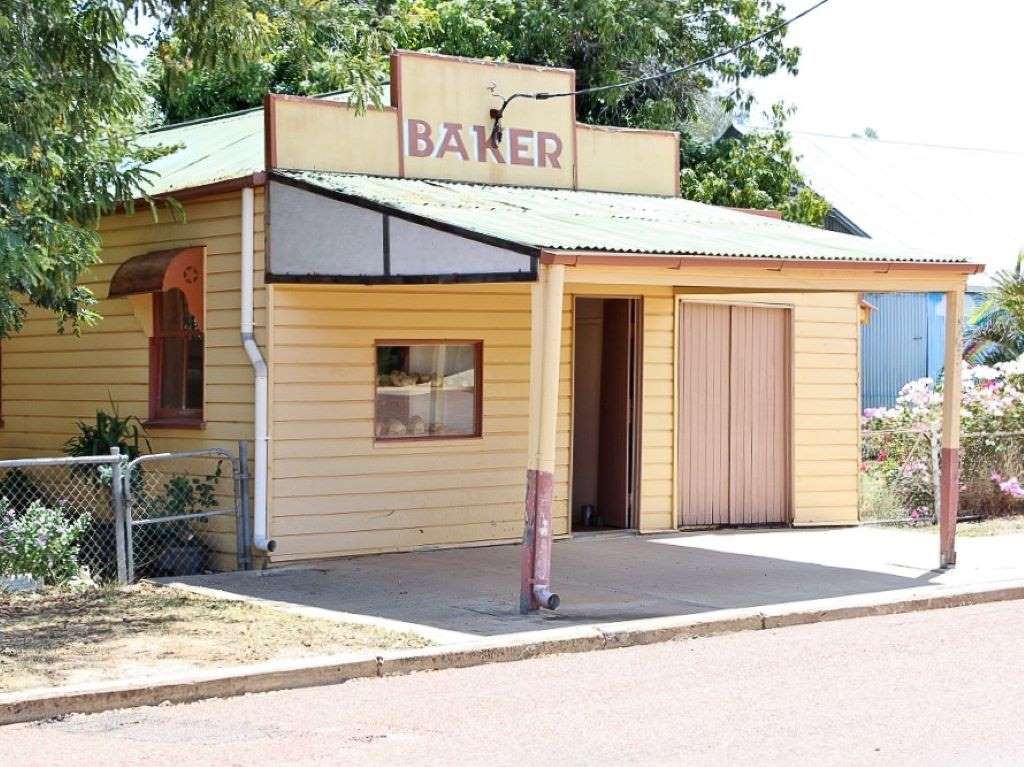 9 thoughts on “For love of bread: The Isisford Bakery”