Fruity Baked Pork Rashers is about pork and how Australian meat preferences have changed over the past 50 years or so. It features an easy recipe for cooking pork rashers, which you’ll find at the end of the post.

The recipe Fruity Baked Pork Rashers is one my mother collected in the 1980s. At the time she was experimenting with new cuts of pork, as pork became more affordable and promoted as a healthy alternative to beef, mutton and lamb in Australian supermarkets and butcher shops.

Since the 1960s, Australians have been consuming more and more chicken and pork, at the expense of beef, mutton and lamb [1]. Compared with 50+ years ago, today Australians are buying and consuming three times as much chicken and twice as much pork. And mutton has all but disappeared from the market.

I have always loved pork, in its various forms (fresh or cured). Examples include roast pork, pork chops, pork sausages, ham and bacon. Perhaps it’s because of my German heritage (on my father’s side of the family). But, despite the many options now available, my favourite is still roast pork.

My mother’s roast pork dinners were one of her specialties. As recommended in her 1949 All-Electric Cookery Book [read Kentish Cake and Slice of History], she always served roast pork (usually a leg of pork) with baked vegetables, brown gravy and homemade apple sauce. And crisp golden pork crackling, of course. (In case you haven’t guessed, I have continued this tradition.)

Did your mother or grandmother make Brawn? Mine did. I remember it from my childhood. There are two recipes for Brawn in my mother’s 1949 All-Electric Cookery Book. What is Brawn? It’s a cold meat, a pressed jellied meat loaf, made from pork or veal trimmings or the flesh from the head of a pig or calf. Brawn is the British and Australian name for this tasty meat dish. In North America it’s called Head Cheese. Brawn originated in Europe, where it’s popular and where there are lots of variations of this cold cut of (mostly) pork meat.

My father also loved pork, which is one reason my mother tried a variety of pork recipes and cuts of pork as they became available.

In the 1970s I recall my mother making Sweet and Sour Pork, which was a creative way of using cold roast pork. Clearly, this recipe reflected the growing influence of Asian cuisine on Australian food preferences from the 1970s onwards. By the 1970s, there was a Chinese restaurant in almost every city and country town in Australia and Sweet and Sour Pork was on every menu [2].

Pork meat comes from the domestic pig. Some people (and religions) consider pigs unclean, so they don’t eat pork in any of its forms. But not so for the majority of the world’s population. Pork is the most commonly consumed meat worldwide [3] [4]. It’s popular in East and Southeast Asia, Europe, parts of Africa, the Americas and Oceania.

This link takes you to an Australian pork company website.

Fruity Baked Pork Rashers (as its name suggests) uses pork rashers. But you could use pork spareribs instead of rashers. The recipe works just as well with spareribs. 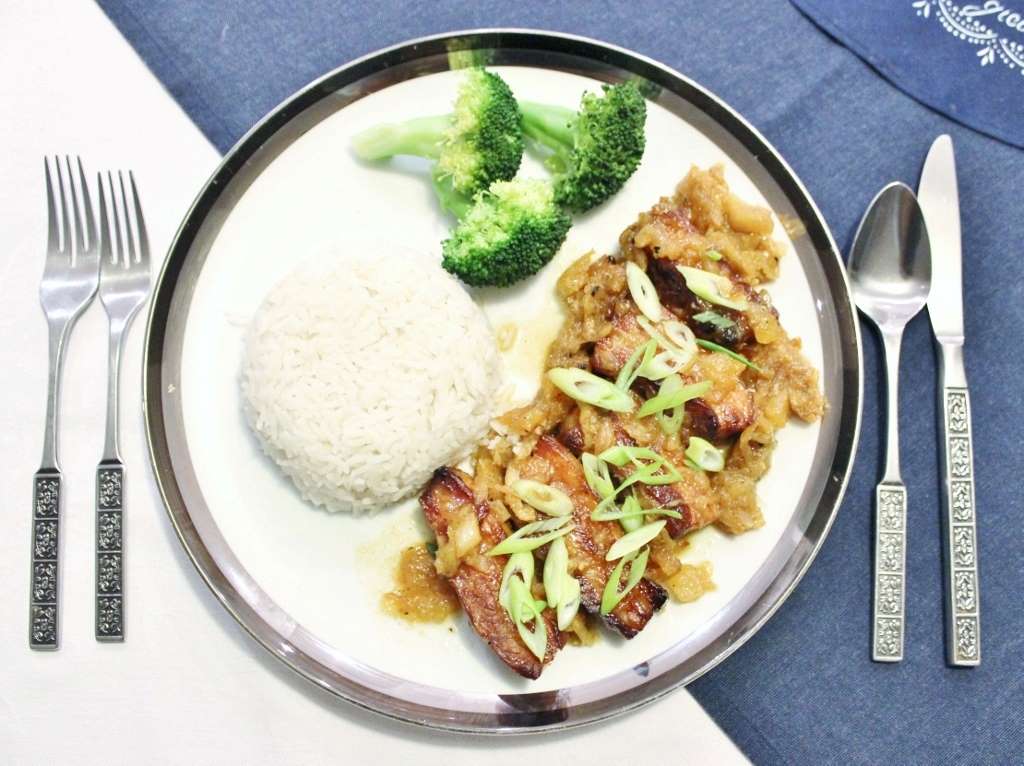