In the Garden: But no, not alone

This short story is about my late mother Evelyn and her faith in the One whom Mary Magdalene met in the garden on that first Easter morn. It’s a companion piece to My mother’s latter years: Living with dementia (March 27, 2021), in which I gave an account of Evelyn’s later life and the impact dementia had on her and those of us close to her.

In the Garden was one of Evelyn’s favourite hymns. My husband Tony and I included it as a reflection and musical interlude during Evelyn’s funeral service in Brisbane and, one week later, during her memorial service in Rockhampton. At both services, our son Daniel played the melody on solo violin. The words of this well-known gospel song together with Daniel’s tender rendition on violin deeply touched our hearts.

Listen to Daniel playing the melody “In the Garden” on solo violin:

The photograph (above) was taken on December 23, 2009. It shows Evelyn with grandson Daniel, at the Henderson Day Respite Centre Christmas luncheon. Daniel, at the time living and working in Vienna and at home for a visit, performed a violin solo during the function. Evelyn so loved Daniel’s violin playing. Photo source: Salecich collection.

According to Kenneth W Osbeck (1990), in 1912 a music publisher asked American songwriter and composer C. Austin Miles (1868-1946) to write a hymn “sympathetic in tone, breathing tenderness in every line; one that would bring hope to the hopeless, rest for the weary and downy pillows to dying beds” (page 116). In the Garden was the result.

Although in his lifetime Miles wrote and composed the music for about 400 gospel songs, he is best remembered for In the Garden. Over the years it has been included in more than 200 hymn books and recorded numerous times by well-known vocalists like Johnny Cash, Elvis Presley and Ella Fitzgerald, to name a few.

In the Garden is based on Miles’ interpretation of Mary Magdalene’s meeting with the risen Lord Jesus in the garden, as recorded in John’s gospel (John 20:1-18). Miles’ words emphasise the close and loving relationship between Jesus (“Master”) and Mary, one of Jesus’ faithful followers.

I come to the garden alone,
While the dew is still on the roses;
And the voice I hear falling on my ear,
The Son of God discloses.

And he walks with me, and He talks with me,
And He tells me I am His own;
And the joy we share as we tarry there,
None other has ever known.

He speaks, and the sound of His voice
Is so sweet the birds hush their singing;
And the melody that He gave to me
Within my heart is ringing.

I’d stay in the garden with Him
Though the night around me be falling;
But He bids me go – through the voice of woe,
His voice to me is calling.

She grew up in an era when families and their guests had sing-a-longs around the piano. Evelyn’s grandmother, uncles and aunts were accomplished musicians and singers, although most were self-taught. They played the piano, button accordion and harmonica, and sung the popular songs and hymns of the day.

As a child Evelyn took piano lessons. Her parents didn’t own a piano, so she used to practise her pieces on the piano at her Granny’s home. Evelyn was never a confident or able pianist, however. She often told me, “I can’t read the music for my left hand.”

When I was growing up, there was always a piano in our home, and my brother and I took piano lessons from an early age. As a sight-reading exercise, I used to play many of Evelyn’s old dance music pieces, which she loved (and so did I).

She grew up in country Queensland and, in June 1935, made her debut. She was 19. At the time, every young single woman looked forward to this time when they made their first public appearance in adult society (the “debut”). Following her debut, Evelyn accompanied her older brother Harold to the local country dances every couple of weeks.

Music and dancing were an important part of Evelyn’s life as a young woman. On 17 September 1942, the day Evelyn enlisted in Brisbane in the Women’s Auxiliary Australian Air Force (WAAAF), she and a friend attended a dance at the Coconut Grove, a very popular Brisbane dance hall in those days. A year later, at a dance in the Brisbane City Hall, Aircraftwoman Evelyn Beaumont met army officer Lieutenant William Proposch, her husband-to-be (my father).

In the 1980s, Evelyn purchased a Yamaha electric organ.

Along with the organ, Evelyn bought a book of easy organ music. Evelyn, in her 60s, was determined to master the organ and use its two keyboards and foot pedals. She spent hours learning and practising the simple pieces – popular melodies of the 1960s, 1970s and 1980s, and well-known melodies from her younger days. In 2003, when Evelyn moved to Brisbane to live with Tony and me, the organ came too. Along with Evelyn’s piano, it took pride of place in our “music room”. In the first year or two with us in Brisbane, Evelyn played it occasionally.

Music, song and dance formed an integral part of Evelyn’s life and identity.

I was keenly aware of Evelyn’s love of music, song and dance, and that these three interests formed an integral part of her life and identity. When Evelyn lived with us, from time to time, Tony and I would play for her the music and songs she loved from her collection of old vinyl records or our collection of vinyls and CDs. I would also play her favourite songs and hymns on the piano.

As Evelyn’s dementia took over, every Saturday morning, Tony and I would bring Evelyn into the living room (where we kept our stereo unit), seat her in a comfortable lounge chair, and ask her to choose the records or CDs she would like to listen to that day. It was a weekly ritual. In the end, Evelyn chose from a very limited number of records and CDs – these were her definite favourites.

The familiar melodies, voices and words spoke to Evelyn’s innermost being, and (for a short time at least) brought her alive. We could tell she was spiritually refreshed as she listened to the gospel songs and hymns we played for her.

Tony hadn’t heard the gospel song before, nor was he aware of its context or significance, so he asked Evelyn, “Why do you like this song?” And he’s never forgotten her answer: “Because it’s true.”

In the Garden: But no, not alone

No matter what she was going through, to the very end of her life, Evelyn knew she was never alone. In the eight years Evelyn lived with us, I know for sure she felt loved and appreciated. She often told me so. You could say that we walked and talked with her “in the garden” almost every day of her later life. Not perfectly, of course, to my shame, but we were there, continually, by her side.

But more importantly, Evelyn believed that God was always with her. After her death, I found a number of Evelyn’s handwritten prayers on pieces of paper tucked neatly between the pages of her Bible. On one of these pieces of paper, Evelyn had written the following prayer:

I meet with God in the morning and go with him through the day. Then when the night comes, before sleep, I pray that God will take over my problems that I had during the day, so when I open up my eyes to greet another day, I’ll find myself renewed in strength to meet what seemed impossible for me to solve alone. And once again I’ll be assured that I am never on my own and to thank God for his blessings that his loving care has brought. Amen.

Evelyn’s words may not have been original, but I know they were heartfelt. As a person living with dementia and incapable of composing a “public” prayer of her own, Evelyn used to copy prayers from one or two little books of prayers she owned, so she could contribute as a member of the church Sharing Group to which she belonged.

Early in the morning on the day Evelyn died, I picked fresh gardenias from my garden and took them to Evelyn’s room. I wanted to help Evelyn feel like she was at home, in the garden – the garden she so loved and tended until recently. Could she smell the flowers? I do not know. Perhaps she had already lost her sense of smell. But we knew she could still hear, so we set up in her room our CD player playing Evelyn’s favourite CDs. When we were not present, the hospital staff would change the CDs, and keep the music playing.

Throughout that last day, the beautiful music and songs Evelyn loved and the sweet fragrance of the gardenias filled Evelyn’s room. Even the nursing staff who popped into her room to check on her from time to time couldn’t help but notice, and were touched.

When Tony and I returned to the hospital on the evening Evelyn died, we found one of the gardenia flowers tucked under Evelyn’s still-warm hands, neatly crossed on top of Evelyn’s now-lifeless breast. “What a beautiful gesture,” I thought. “How appropriate.”

For me, the flower symbolised not only Evelyn’s love of gardening and connection with our garden, but much more. It symbolized Evelyn’s firm faith in the One whom Mary Magdalene met in the garden on that first Easter morn.

Evelyn loved the hymn In the Garden because, whenever she heard its familiar melody and words, it reminded her how much God loved her, and promised to be with her, to the very end of her days. After all, Jesus told his followers that when He left them He would send “another comforter” (the Holy Spirit) who would be with them forever (John 14:16). Evelyn believed this.

Unlike Mary Magdalene, Evelyn did not come to the garden alone. 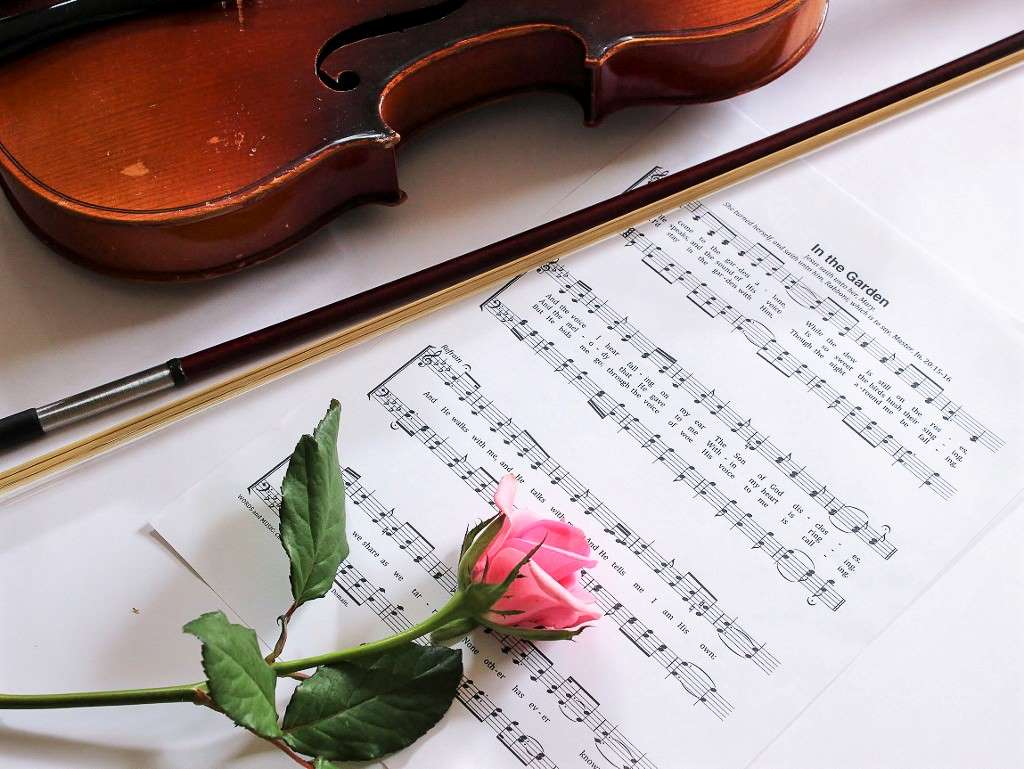 9 thoughts on “In the Garden: But no, not alone”