My first experience of “Italian” food was my mother’s spaghetti with bacon, onion, tomato and grated cheddar cheese. As a child, I thought it was really delicious, but my father was not so enthusiastic. After all, he had tasted real Italian food.

My father would recount in great detail the spaghetti dishes served at Mama Luigi’s, a restaurant he frequented during business trips to Brisbane in the 1950s and 1960s. The restaurant, which opened in 1942, operated from a house at 240 St Paul’s Terrace, Spring Hill, an inner city suburb of Brisbane.

As a child growing up in Rockhampton, I knew no-one of Italian descent. By the 1950s and 1960s, there were quite a lot of Italian-Australians living in Queensland, but mainly in far north Queensland, around Innisfail, Ayr and Ingham.

More than a century ago, from as early as the 1890s, Italian migrants came to these parts, seeking employment as canecutters in the sugarcane industry. From the 1920s, Italian migrants started to arrive in Australia in large numbers. In far north Queensland, over time, many of the Italian immigrants acquired sugarcane farms of their own.

The number of Italian-Australians increased markedly after the mass migration that began in the 1950s and 1960s. Today, Italian-Australians comprise the sixth largest ethnic group in Australia. According to the 2016 Australian census, 4.6% of Australia’s population were born in Italy or are descendants of Italian migrants to Australia. No wonder Italian cuisine has become an integral part of Australia’s eclectic range of dining options and home cookery.

The largest Italian communities today are found in Melbourne and Sydney. In comparison, the number of Italian-Australians living in Brisbane is small. Nevertheless, it was in Brisbane in the early 1970s that I met Camillo and Vilma Bianchi.

In 1951, after a long sea voyage from Hamburg, Germany, Camillo and Vilma and their two sons, Pietro Antonio (born 1947) and Antonio Pietro (born 1949) arrived at Melbourne, Australia. As “assisted migrants” the family spent several weeks at Bonegilla, a camp in north eastern Victoria set up to receive and train Australia’s new arrivals. From Bonegilla, the family relocated to the migrant centre at Wacol, Brisbane.

While Vilma and the boys stayed at Wacol, Camillo went to Innisfail, in far north Queensland. Here he worked as a canecutter, earning enough money to support the family, save for a deposit on a house, and pay back the government for their passage.

In 1954, Camillo, Vilma and family moved into their own home in Paddington (Brisbane). Here the couple would spend the next 50 years. Their home was not far from the Sacred Heart Catholic Church, Given Terrace, Rosalie. For Vilma, a devout Catholic, it was important to be close to a church. If she could, Vilma would attend church services (“mass”) every day of the week. In 1961, all four members of the Bianchi family became Australian citizens.

I met Camillo and Vilma Bianchi in 1972, when I was a University student living in Brisbane. They lived next door to my boyfriend Tony and his parents (my future husband and parents-in-law). Whenever I came to visit Tony and his family, I would say hello to “Mr and Mrs Bianchi”. Both of them spoke good English, despite the fact that English was not their first language.

Camillo Bianchi was born in Trieste, in north eastern Italy. Vilma was born in northern Croatia; she was Italian by adoption. Vilma’s mother died when she was 3, and her sister, 10, became like a mother to her. Life was hard. Their father was a harsh, pitiless man. When still young, Vilma fled to Rome, where she obtained work as a housemaid. Her employers were “good people”, Vilma was safe and had food and lodging. It was during her time in Rome that Vilma met Camillo, destined to be her life partner. Camillo served in the Italian army during World War II. Sometime after the end of the war, the couple married in a ceremony in the renowned St Mark’s Basilica, Venice.

“Mrs Bianchi” (as I always called her) was the most beautiful person one could hope to meet. When I met her, she was about 50 years old and still working on the production line at the Coca Cola factory in James Street, New Farm (Brisbane).

Over the next 30 years or so, every time my husband Tony and I came to Brisbane to visit Tony’s parents (we lived in Bundaberg, then Rockhampton), we would call in on Mr and Mrs Bianchi. What I remember most about Mrs Bianchi was her warmth and genuine interest in Tony and me (and later our children), her strong Christian faith, our in-depth conversations over the kitchen table, and (of course) her food.

It was Mrs Bianchi who introduced me to Italian hospitality and Italian home cooking. She was a great cook and delighted in sharing her food with others. I have never forgotten the meal Mrs Bianchi served Tony and me and our children during a visit a few days after Christmas, 1996. She went to so much trouble.

It was a sit-down meal, starting with drinks and appetisers. Next came the entrée, then a spaghetti dish (we thought this was the main meal) and, finally, a veal roast with baked vegetables! The food just kept coming, in copious amounts, laid out in large bowls in the middle of the table, for each of us to help ourselves. But what was worse, “Mrs B” kept adding more food to our plates, saying, “Please, have some more.”

I suppose I shouldn’t have been surprised, as my Croatian-born mother-in-law also served food in this manner (read Home cooking Croatian-style: Dirty Macaroni, September 9, 2015). And you had to keep eating to be polite!

Over the years, I’ve tried my hand at preparing a number of different Italian dishes. I’ve also been fortunate enough to spend time in Italy, experiencing Italian cuisine in situ.

I’ve learnt that the cuisine of Italy is amazingly diverse. According to Anna Del Conte, one of the world’s most respected writers about Italian cookery, Italy may be one nation but, with respect to its cuisine, it’s a collection of regions, each with its own tradition(s). Tomato is a vital ingredient of southern Italian cooking, along with dried pasta, while rice, butter, polenta, veal and beef are the mainstays of northern Italian cooking. Pizza, long associated with Italy, is actually an ancient food. Along with spaghetti, pizza came to Australia with the Italian immigrants in the early 20th century.

I doubt there are any Australians today who are not familiar with spaghetti and who have not tried at least one spaghetti dish. Spaghetti is the most versatile and most popular of all the different shapes of pasta (and there are many!).

The word spaghetti means “little strings”. It was first used in reference to pasta in an Italian publication of 1846. However, spaghetti was not new. Called vermicelli, it had been made for centuries. In the late 18th century, vermicelli (what we know as spaghetti) became the pasta associated with Naples, capital of the southern Italian region of Campania. By the 19th century spaghetti was being produced on a commercial basis in factories in Naples.

Pasta is a mixture of flour (or semolina) and water and/or eggs. In Italian, pasta is properly called pasta alimentare. In Italy, pasta usually means dried pasta, the composition of which is tightly controlled by law. Dried pasta comes in many shapes and sizes, many of which we can purchase in Australian supermarkets.

Each pasta is best suited to a particular kind of sauce, according to Italian-born food writer, Anna del Conte. For example, long pasta, such as spaghetti, is best served with a sauce based on olive oil, which keeps the strands slippery and separate. Medium-sized tubular pasta is better suited to sauces based on butter, cream and cheese, or combined with vegetables or pulses. The large rigatoni and penne are best used for baked dishes. My Pasta Bake (February 18, 2016) is a good example of the latter. It is made using fusilli (pasta spirals).

Pesto is a basil sauce. It originates from Liguria, a region of north western Italy, the capital of which is Genoa. Traditionally, the basil is pounded in a mortar with some garlic, salt and, if desired, pine nuts or walnuts. Extra virgin olive oil is added drop by drop. The addition of grated Parmesan is optional. Today, pesto is more likely to be made in a blender or food processor rather than using a mortar and pestle.

Traditionally, pesto accompanies trenette (a long thin flat Ligurian pasta, similar to fettuccine), trofie (homemade Ligurian spirals) and picagge (another Ligurian specialty, a ribbon-like pasta). The pasta is often cooked with sliced potatoes and green beans and all three ingredients are served together and dressed with pesto.

My recipe for homemade pesto makes a great accompaniment for fettuccine or spaghetti. (If you are an Italian cookery purist, I hope you are not offended that I used spaghetti.) The pesto combines chopped fresh basil, not too much garlic, pine nuts or walnuts (whichever you have on hand), grated Parmesan cheese and extra virgin olive oil. What these ingredients produce is a delicate, yet tasty, pasta sauce.

I hope you like it and make it often, as I do. 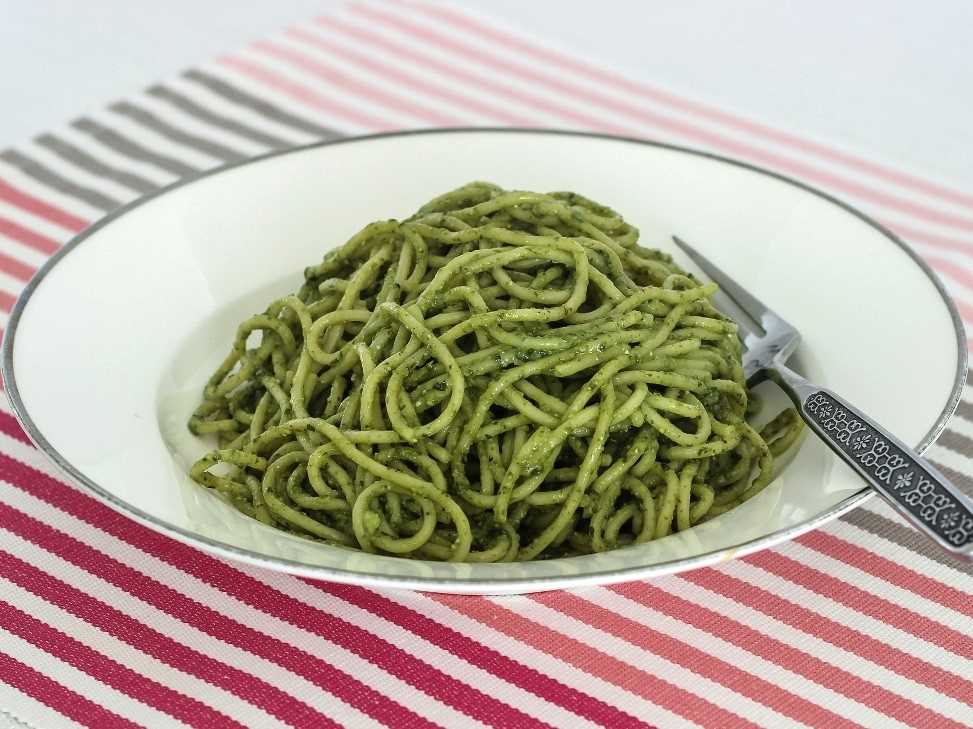 6 thoughts on “Italian cuisine in Australia: Spaghetti with Homemade Pesto”