Nana in Melbourne: Joy and a joy-giver

Joy came into my life when I was three.

She was so pretty – fine features, blue eyes, clear olive complexion and long dark brown hair. She was dressed beautifully, in her white voile dress with hand-embroidered bodice and Peter Pan collar edged with lace, pleated skirt, pink taffeta petticoat and matching bonnet. Her outfit was completed by white shoes and socks. She stood about 2 feet (60 cm) tall.

Time has passed. Joy is as beautiful today as she was then, although the passing years have brought some changes. Her outfit is still lovely, although not as fancy as it was before. The bonnet has long gone. Now she wears a wig, replacing hair that has thinned out over the years. A few years ago, she had some much-needed “cosmetic surgery” (on her face, arms, legs and abdomen). Sadly, the abdominal surgery meant she lost her “voice”.

I often think that I didn’t look after her as well as I should have in the early years. Or maybe I loved her too much and gave her too much “motherly” attention.

Today my granddaughters give Joy the same love and attention I gave her in those early years. They think Joy is special too. Of course I make sure they treat her with the care and respect she deserves. She is old (nearly as old as I am) and very precious.

Joy is a doll.

Not just any doll, but a tangible reminder of a special grandmother, my “Nana in Melbourne”.

Elsie Antonia Lowe was born in 1891 at Riddell’s Creek, on the southern foothills of the Macedon Ranges, central Victoria. She was the sixth child of James Samuel and Margaret Antonia Lowe.

In 1914 she married William “Charles” Proposch. Charles and Elsie made their home in Melbourne’s eastern suburbs. They had three sons. My father, William, was the middle one.

In early 1945, William (Bill), then a Lieutenant in the Second Australian Imperial Force (2nd AIF), married his wartime sweetheart, Evelyn. They met a couple of years earlier in Brisbane where Evelyn was serving in the WAAAF (Women’s Auxiliary Australian Air Force). Evelyn came from a small town in country Queensland. Bill and Evelyn married in Rockhampton, Central Queensland; Charles and Elsie were unable to attend the ceremony. Evelyn met them later that year (1945), when she and Bill were able to travel to Melbourne.

Bill was discharged from the Army at the end of 1945. He and Evelyn decided to make their home in Rockhampton, a long way from Melbourne and Bill’s parents, but close to Evelyn’s family.

Elsie was a great letter-writer. In this way she kept in close contact with Bill and Evelyn, despite their distance apart. (At another time, I will tell you about Elsie’s communication with Bill during his wartime service, which will touch your heart!). There were the occasional phonecalls, as long-distance calls were expensive and used only for emergencies and special occasions. There were no mobile phones in those days and no Skype or Facetime.

My brother was Charles’ and Elsie’s first grandchild. I arrived 5 years later.

I met Elsie (“Nana in Melbourne”) when I was three.

It was when Charles and Elsie came to visit us in Rockhampton. Their visit was a huge event for them and our family. Interstate travel then was expensive, difficult and uncommon for most families. During their stay, Charles and Elsie met Evelyn’s parents and we all spent a week together at Yeppoon, a popular seaside holiday destination.

Charles and Elsie brought me “Joy”. This was to be the first of many gifts I received from “Nana in Melbourne”. Not big or expensive gifts, just little things. Joy was a one-off.

Every year, for my birthday, “Nana in Melbourne” would send me a greeting card and handkerchief.

As I got older, she would include a letter as well. I used to write back. Nana wrote to me at other times too, and I replied. I felt that I knew her, even though I had not seen her since I was three. The person I knew from our written communication was warm, loving, generous and jovial.

By the early 1960s, Elsie was not in good health. She was overweight, had high blood pressure and angina. My parents talked about our family going to Melbourne to visit her and Granddad. Charles and Elsie were in their 70s and we had not seen them for 9 years.

After years of struggling to make ends meet, my parents could afford to buy a new car, which meant the four of us (Dad, Mum, my brother and I) could travel the 1200 miles (2000 km) by car from Rockhampton to Melbourne. The plan was to travel to Melbourne during the August school holidays. We were all very excited about the trip and about seeing Charles and Elsie again.

In May that same year, Elsie included a letter to my parents and me along with my birthday card and handkerchief. She was so elated about our impending visit. To me in particular she wrote:

We have our fires going now, but not so much. Hasn’t been so cold. Not like it will be when you come down. You will want your warm woollies & skirt. That’s what the girls have here.

Little did we realise, but this would be Elsie’s last letter to us.

On 12 July, just four weeks before we were due to leave for Melbourne, Elsie died. We were heart-broken. I remember clearly the shock and sorrow I felt when I was told the news.

We still made the trip to Melbourne, one month later, for Granddad’s sake. He was pleased to see us but he could not hide his sadness, his loneliness. To me, he seemed lost. He wrote in my autograph book: “Nine long years have passed / Since you were three / Now that I see you again / It’s good for me. Your Gran’pa.”. At least he and I had an opportunity to get reacquainted. But not so for Nana and me.

I met “Nana in Melbourne” just once in my life.

I loved her, and I know she loved me. She gave me Joy, my beautiful doll, which I have always treasured. But much more than that, “Nana in Melbourne” gave me the lasting joy of a loving adult-child relationship. Whenever I think of her I am reminded of her persistence, grace and generosity, despite adversity, disappointment and the pain of separation she experienced as mother and grandmother for much of her later life.

That is why “Joy” is so precious to me. 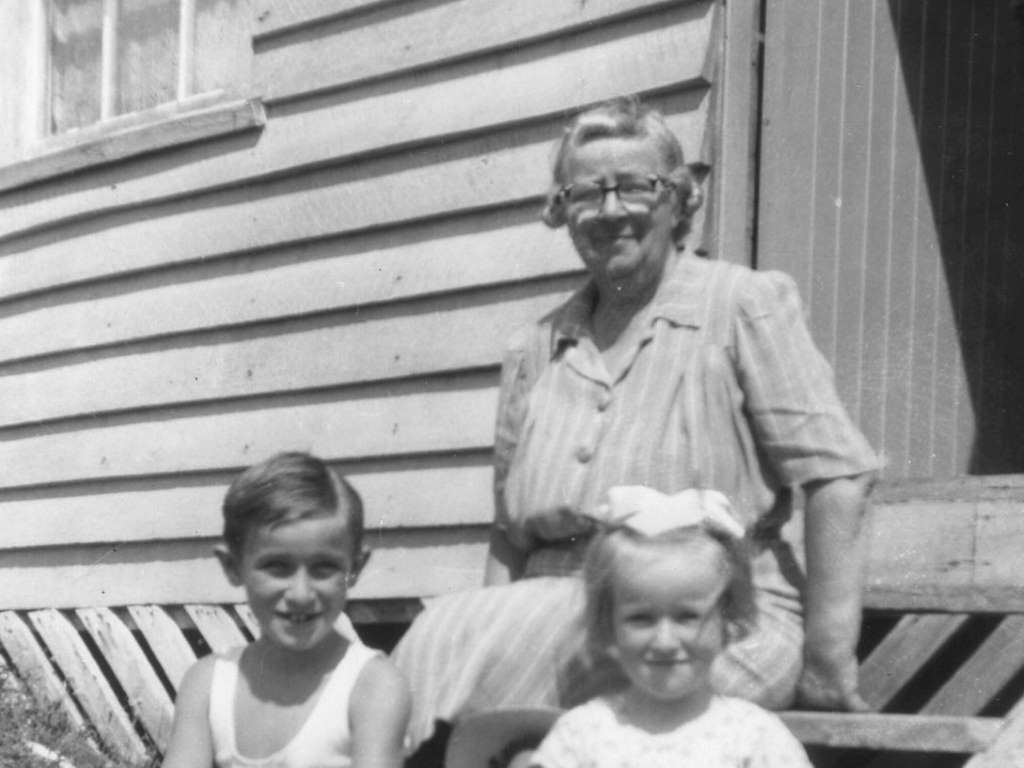 11 thoughts on “Nana in Melbourne: Joy and a joy-giver”