Kentish Cake and slice of history

The Kentish cake was one of my mother’s specialties. I remember her baking Kentish cake often when I was a child (I wrote about this in Pasta Bake). As well as my mother’s Kentish cake recipe, this story includes a “slice of history”: food and home cooking in Australia in the 1930s and 1940s. It’s a companion story to my previous post My mother, a young woman, which I wrote as a Mother’s Day tribute to my late mother, Evelyn.

A SLICE OF HISTORY

Evelyn was typical of many young women of her era. She learnt how to cook at home under the tutelage of her mother. She happily and willingly helped her mother in the kitchen. She did not question the norm that it was a woman’s role to do the cooking and manage the family household.

Evelyn loved cooking and she was good at it too.

In 1939, at 23, Evelyn won First prize, £1 (today’s equivalent is approximately 80 AUD), for her Kentish Cake recipe (The Australian Women’s Weekly, Saturday 12 August 1939, p. 70). As a young woman living in country Queensland, this was a great achievement and it must have given her much pleasure.

In my collection of recipe books, I have two that belonged to Evelyn. She used these books throughout her adult life. One is dated 1934, the other 1949. Both books give us a peek into everyday life in Australia in the 1930s and 1940s.

They reveal much about culinary habits and the scope and manner of home cooking in that period (1930s, 1940s). The range of recipes and choice of ingredients generally was narrower then than it is today, the exception being biscuits, cakes, pastries and puddings. Page-wise, approximately one-half of the 1934 and 1949 recipe books is devoted to biscuits, cakes, pastries and puddings. Clearly, in the 1930s and 1940s most households were expected to prepare these foodstuffs at home. Very few were available or purchased commercially (as is the case today).

Recipes in these two books are listed according to the following topics:

Notably absent in these books are recipes many of us are familiar with today. Examples are: rice and pasta dishes, international cookery, quiches and savoury slices, pavlovas, sweet slices, muffins.

The first book, entitled simply Cookery Book, was published in 1934 by the Federal Press, Rockhampton. Evelyn’s copy, a third edition, was compiled by Miss Vivien Voss to raise funds for the Young Women’s Christian Association (YWCA) Rockhampton. It was written for women and intended to be used by women.

The second book, All-Electric Cookery Book, was published in 1949 by Associated General Publications Pty Ltd, Sydney. This copy, a fourth edition, was compiled by Mrs F V McKenzie, Director of The Electrical Association for Women (Australia). Once again, this book was directed at women cooks and homemakers.

The All-Electric Cookery Book, as its name suggests, aimed to help post-war housewives make the change from combustion-fueled cooking to cooking with electricity. In the 1930s, few Australian homes had access to electricity. Most cooks used combustion (wood-fired) stoves. However, by the late 1940s, electricity was available to homes in most Australian cities and urban areas, including Rockhampton.

Both books contain a section dedicated to household management generally. In the 1934 publication it is headed “Miscellaneous” and covers cooking hints, preparation of homemade cleansers, and first aid. The 1949 publication provides an extensive “Electrical Guide Section”, aimed to help 1940s women use the “magic gift of electricity safely, confidently and economically”. By 1949 Evelyn and her husband were living in Rockhampton and had access to electricity.

One cannot help but notice that the 1934 and 1949 recipe books are full of advertisements. Most are whole-page advertisements by local retailers and Australian manufacturers of ingredients, kitchenware and home appliances. In the preface to the 1949 publication, the author wrote: “Attention is especially directed to the advertisements. You will find every one of them most helpful as a guide to a better standard of living.”

The advertisements are most telling.

They shed light on Australian society, its values and norms, in the 1930s and 1940s.

The 1949 All-Electric Cookery Book promoted many new products for the kitchen and households generally. Apart from electric cookers and electric appliances (mentioned previously), new kitchen products included pyrex and aluminium kitchenware, pressure cookers, and the Propert Swift-Whip beater-mixer. My mother acquired and used all of these products. In fact, I still use Evelyn’s vintage Propert Swift-Whip beater-mixer and her 1940s aluminium pudding steamer, a basin and fitted lid.

I conclude this brief survey of food and home cooking in the 1930s and 1940s with the following poem, an extract from Owen Meredith’s The Dinner Hour. Owen Meredith was a pen-name for Edward Robert Bulwer-Lytton, an English statesman who lived from 1831 to 1891. These verses were chosen by Miss Vivien Voss as an epilogue to her 1934 Cookery Book (page 299): 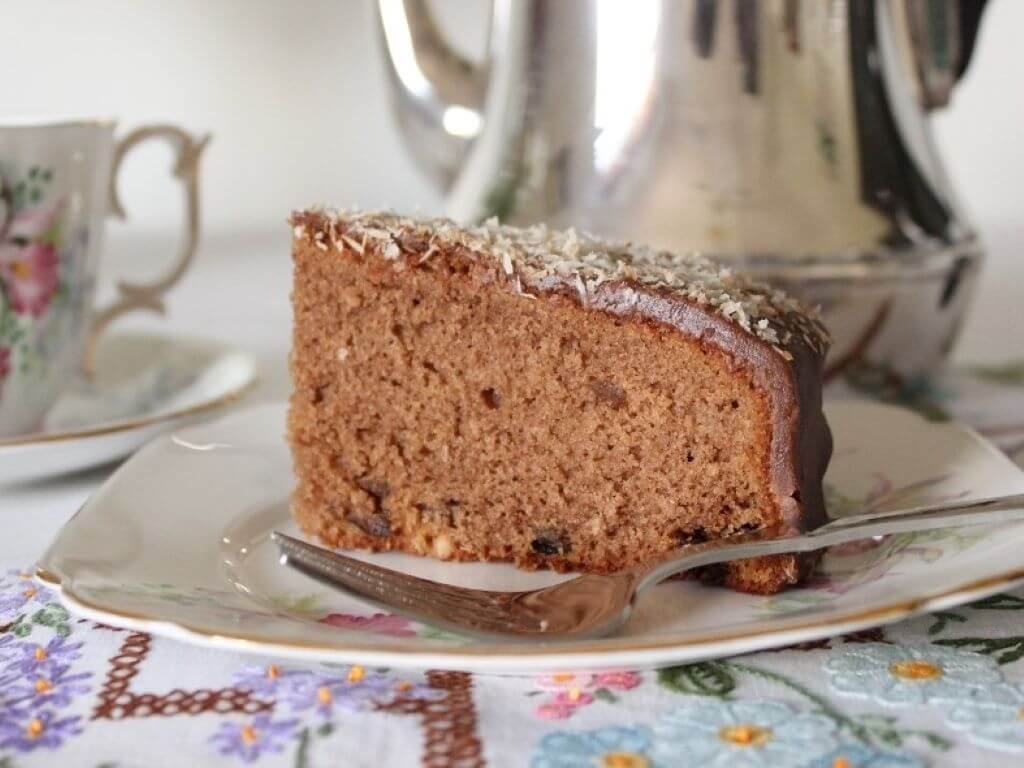 7 thoughts on “Kentish Cake and slice of history”