A lock of hair: A treasured keepsake

I never knew my aunt, my mother’s sister. She died long before I was born. There are no photographs of her, so I can only imagine what she looked like. But I do have something that belonged to her. It’s a lock of hair. A carefully preserved lock of hair, fastened with a tiny silk ribbon and bow. This lock of hair was my grandmother Flora’s treasured keepsake.

Thyra Grace Beaumont was the third child of Donald and Flora Beaumont of “Woolein View”, Rannes. She was born on Monday 20 January 1919, at the Mount Morgan hospital. The couple’s older children were Harold (5) and Evelyn (3). Before leaving Mount Morgan to return home to Rannes, Donald and Flora had their infant daughter baptised. Her baptismal ceremony took place at St Enoch’s Presbyterian Church, Mount Morgan, on Sunday 2 February 1919.

A beautiful healthy baby, Thyra Grace was a welcome and much-loved addition to the Beaumont family. The older children adored their little sister. To them she was a novelty, a new play-thing. They watched with awe as their mother tended to the newcomer’s needs and, whenever they got a chance, they held her tiny hands and stroked her head and soft doll-like face. They couldn’t wait until Thyra was old enough to join them in their games.

Days and weeks turned into months.

By January 1920, Thyra was 12 months old and walking. My mother Evelyn remembers her little sister as a pretty toddler, with a head of magnificent blond curls. In this, little Thyra was just like their mother Flora, who had naturally curly hair (although Flora’s was dark brown). Evelyn, however, much to her chagrin, had straight hair. In those days, the early 1900s, it was fashionable to have curly hair. Every little girl and young woman wanted to have curly hair. Evelyn was no exception.

It was a clear, sunny April day. Little Thyra was playing happily with her brother and sister in a paddock about 100 metres from the family home when, unexpectedly, she took ill. The children’s father was nearby and came quickly to find his infant daughter limp, bluish in colour and barely conscious. He wrapped her in his arms and ran to the house. Little Thyra went into convulsions, which did not abate.

Donald and Flora took their little one to the Mount Morgan hospital (their nearest), 40 miles (66 kilometres) away. I’m not sure how they travelled there. Did someone drive them? Did they go by horse and buggy? It was 1920 and Donald and Flora didn’t own a car. Today, by car, the trip from Rannes to Mount Morgan takes about three-quarters of an hour. In 1920, it would have taken at least 2 hours regardless of the means of transport.

By the time Donald and Flora arrived at the Mount Morgan hospital, there was nothing that could be done to save their darling daughter.

Thyra Grace Beaumont died on Monday 19 April 1920. She was just 15 months old. Her funeral was held the following day, Tuesday 20 April. The funeral notice published in the “Morning Bulletin” (Rockhampton) that morning read:

“The Friends of MR DONALD WILLIAM BEAUMONT, of Rannes, are respectfully invited to attend the Funeral of his dearly beloved DAUGHTER (Thyra Grace), which will move from the Residence of Mr. Fred Hayward, Hall-street, THIS (Tuesday) FORENOON, at 11 o’clock for the Mount Morgan Cemetery. T. T. CORNES, Undertaker.”

Thyra’s parents were heartbroken. Their beautiful child, so bright and lively, was dead. They couldn’t believe it. They were numb. Paralysed. This was grief like they’d never experienced before. They felt their loss acutely. For Flora, the agony of losing a child was almost too much to bear. Not that Flora was unacquainted with suffering, sorrow and loss. These had been her lot from an early age.

In February 1900, Flora’s baby brother Eli died prematurely. He was 7 months old. Her mother, Julia, died 6 weeks later, on 20 March 1900. A loving, generous and sensitive woman and mother of eight (Eli was child number 8), Julia Triphena Balchin was just 41 years old when she died. Julia’s death was a harsh blow for the family, especially Flora. At the time Flora was 12, going on 13.

Following the death of her mother, Flora was left to care for her two younger brothers, Henry (12) and Charles (4). It appears that their four older siblings had already left home. I’m not sure how long Flora fulfilled this guardian role. Years later, Flora (my grandmother) told me that her father was a hard, cruel man. She said she was terrified of him, especially when he was drunk (which was often). Clearly, her father was neither a good man nor a good father.

At 13, Flora, fearing for her life, ran away from home. She never spoke about what happened to her, but I’m convinced her father abused her in one way or another. This dear child (for that’s what she was) had no mother and a father who cared less for her. To whom did she turn? A kindly woman, wife of the publican of a Mount Morgan hotel (I don’t know which one), took her in and cared for her. Flora never returned to her father or the family home.

I can only guess at how Donald and Flora dealt with the death of their child.

Donald was quiet and reserved, a man of few words. I doubt that he and Flora would have spoken much (if at all) with each other about their loss or how they felt. I think they would have suffered in silence.

Despite their stoicism, Donald and Flora responded to Thyra’s death in two tangible ways that I am aware of.

Both were common funereal practices in the late 1800s and early 1900s.

Firstly, Flora set aside a lock of Thyra’s hair as a keepsake. It was not uncommon in those days for bereaved persons to keep a lock of hair from a deceased child or close family member. For Donald and Flora, this memento of their beloved child and her head of blond curls provided some degree of comfort.

Secondly, Donald and Flora had a memorial card made to honour and give thanks for Thyra’s short life. Like the lock of hair, this precious item is now in my possession. The card is properly called a “cabinet memorial card”, as it is the size of a cabinet photograph typical of that era, 6½ by 4½ inches (approximately 16.5 by 11.5 cm). It’s made of thick card stock, black with gold lettering and embellishments. Donald and Flora would have ordered and received this memorial card well after Thyra’s funeral service. I’m not sure where they kept it, but typically people kept cards such as this in the family photo album.

The card reads: “In loving remembrance of our beloved daughter THYRA GRACE BEAUMONT, Who Died April – 1920, Aged – Years. DEEPLY MOURNED.” It includes the following texts, one based on two Biblical passages, the other a poem (author unknown).

“The Lord gave, and the Lord hath taken away: blessed be the name of the Lord.”

“One of the best that God could send,
Beloved by all – a faithful friend.
Called home from those who deeply love,
To gain a glorious life above.
With aching hearts and tearful eyes,
We linger where our dear one lies.
And breathe those sacred words once more,
Not lost, but only gone before.”

Years after Flora’s death, my mother Evelyn told me that Flora never got over Thyra’s death. It was a pain Flora bore for the rest of her long life (and she lived until she was 94). I was not aware of the abiding sadness Flora clearly felt. My grandmother never spoke about Thyra Grace or the circumstances of her child’s premature death, at least not to me. Maybe it was just too hard for her to verbalize how she felt. Or perhaps she thought I wouldn’t understand. After all, I hadn’t experienced the loss of a child.

I’m just so grateful, though, for my grandmother’s keepsakes: Thyra’s lock of hair and the memorial card. Now mine, these treasured mementos help me to feel a special connection to both my dearly-departed grandmother and her beloved daughter, Thyra Grace, the aunt I never knew.

WORDS OF HOPE FOR THE GRIEVING

“Blessed are those who mourn, for they shall be comforted.”
(Matthew 5:4, English Standard Version)

“He will wipe away every tear from their eyes, and death shall be no more, neither shall there be mourning, nor crying, nor pain anymore, for the former things have passed away.”
(Revelation 21:4, English Standard Version) 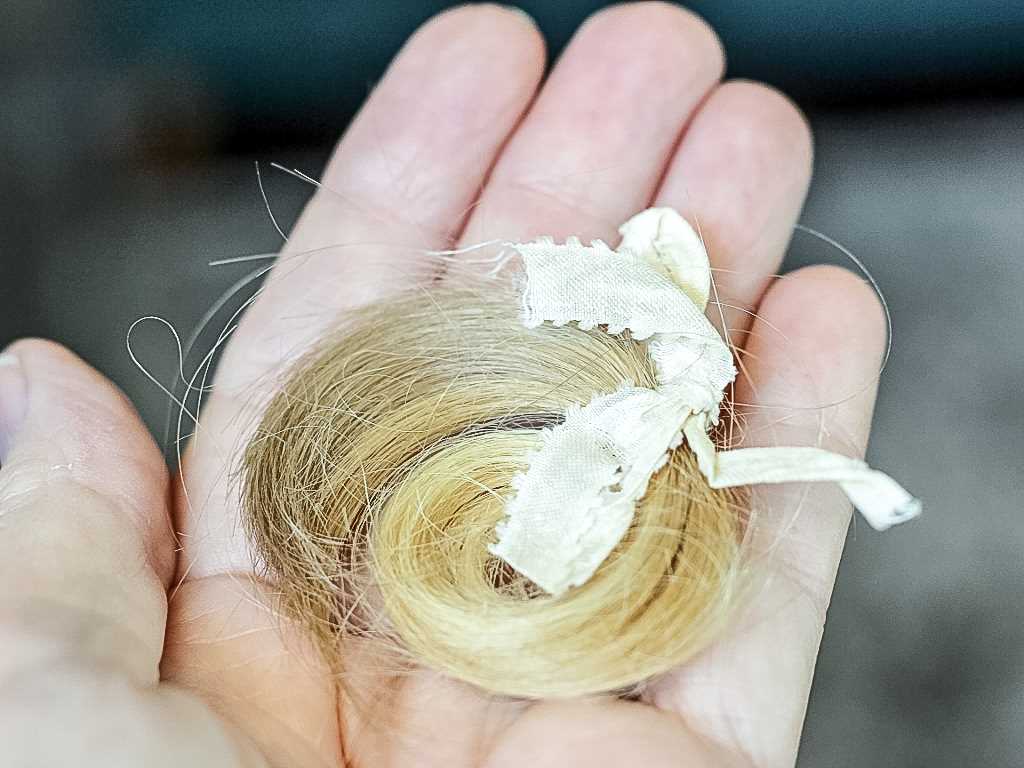 14 thoughts on “A lock of hair: A treasured keepsake”