The many lives of Winton’s North Gregory Hotel

Last October, during a visit to western Queensland, my husband and I stayed for three nights at Winton’s North Gregory Hotel. We were surprised to learn that this magnificent building, located in Elderslie Street, the main street of Winton, is the fourth North Gregory Hotel to grace this site.

What happened to its namesakes?

From the information I obtained at Winton, I found discrepancies as to how and when the former buildings met their fate. I was confused. I didn’t know what to believe.

Therefore, when I returned home, I determined to learn the truth about the many lives of Winton’s North Gregory Hotel.

NOTE: A list of references I used in preparing this account is found at the end of the post. References are numbered and displayed throughout the text in brackets [X].

The town of Winton is the administrative centre of the Winton Shire in central western Queensland, 177 kilometres northwest of Longreach and 866 kilometres west northwest of Rockhampton. Winton is widely acknowledged as the birthplace of Australia’s airline QANTAS. At the 2016 census, Winton’s population was 875.

William Henry Corfield and Robert Fitzmaurice, two of Winton’s earliest European settlers, built the first North Gregory Hotel. It opened for business on 25 June 1879. They named the hotel after the Queensland pastoral district (“Gregory North”) in which the fledgling township was being established. The building was a small one-story structure of timber and corrugated iron. Corfield and Fitzmaurice built it next door to their general store, which they opened the year before (1878). [1]

After Fitzmaurice left the partnership in 1881 because of ill-health, Corfield sold the hotel to Mr W Brown Steele of Aramac. Mr Steele took over the business in April 1882. [2]

The hotel changed hands a second time. Mr Daniel Wood, of Middleton, bought the hotel in December 1898. [3] Two months later, in February 1899, Mr Wood announced a plan to rebuild the hotel. He said of the old building, “It’s seen the best of its days.” He hoped to build the new hotel of brick, if bricks could be acquired. [4]

Builders Smith and Hanson constructed the second North Gregory Hotel in the latter part of 1899. The original building was demolished (in stages it appears) to make way for the new one. Mr Wood kept the hotel open for business throughout the construction period. [5, 6]

The building did not burn down (as some claim), although there was a fire scare in February 1899, soon after Mr Wood took ownership of the hotel. A fire broke out in a dray filled with rubbish at the rear of the building. Fortunately, plucky passers-by quickly extinguished the blaze and the building was saved. [7]

The new building was completed by December 1899. It was an impressive two-storey structure, hailed at the time as “a credit to both the town and district”. [8]

The most commodious hotel in northwest Queensland

Mr Wood advertised the rebuilt establishment as “the most commodious hotel in northwest Queensland” with “every convenience offered to visitors and the general public”. The new premises offered cool and airy bedrooms, first-class liquors, ice on hand, A1 cuisine, hot and cold water plunge and shower baths, good stabling and a secure paddock. [9]

The risk of fire was ever present. In 1912 and again in 1913, fire menaced the North Gregory Hotel. In the first instance, a fire started in a row of bedrooms occupied by staff at the rear of the building. Prompt action quelled the outbreak, but not before a chest of drawers and a quantity of clothing were destroyed and a wall badly charred. [10] In the second instance, a fire broke out in an upstairs room [11]:

The North Gregory Hotel, the leading hotel in the town, had a narrow escape from fire. A blaze was discovered in the linen room upstairs. It had a fair hold, but prompt measures averted a serious conflagration. Had the fire got a hold in all probability the whole of the chief business portion of the town would have been destroyed.

Sadly, this report was prophetic. The second North Gregory Hotel served the people of Winton for just three more years before it succumbed to fire.

Winton’s North Gregory Hotel, along with four other buildings in Elderslie Street, burned down late in the evening of Saturday 3 June 1916. The fire started around 11.00 pm in the adjacent Corfield and Fitzmaurice Store (one of the buildings lost). It was so fierce that, despite all efforts to contain it, the fire soon spread to the upper floor of the hotel. [12, 13]

A third North Gregory Hotel was erected. The new building was completed in April 1917, ten months after the fire. It was even bigger and better than the previous one. [14]

This grand building served the people of Winton for nearly 30 years, before it suffered the same fate as the one it replaced.

On the evening of 7 August 1946, a fire started in a jewellery shop in Elderslie Street, spread to the North Gregory Hotel and four other businesses in the main street. It destroyed the premises of six businesses. The loss was estimated at ₤30,000. Fortunately firefighters saved the nearby Corfield and Fitzmaurice Store and The Royal Theatre, adjacent laneways serving as firebreaks. [16]

The destruction of the North Gregory Hotel and the other establishments in Winton’s main street left a gaping hole in the town centre, both visually and economically. At a special public meeting held in 1947, the citizens of Winton voted unanimously to petition the Winton Shire Council to investigate building a modern hotel to replace the one that had been lost. [17]

The Winton Shire Council took up the challenge. In late 1947 the Queensland Parliament amended the Local Government Act to allow a municipal council to own and operate a licenced premises. An Order-in-Council giving the Winton Shire Council the authority to purchase the land, licence, goodwill and assets of the (former) North Gregory Hotel was issued on 28 October 1948. This council-owned hotel would be a first for Queensland. [18]

In the meantime, Mr Edward Arthur (“Eddie”) Hegvold (1909-1991), architect, of Rockhampton, together with Mr Jack Mulholland (1903-1985), consulting engineer of Brisbane, drew up plans for the building. [19] They envisaged a modern two-storey structure of reinforced concrete and brick, with a frontage of 160 feet (approximately 49 metres). The building would comprise 42 bedrooms, spacious lounges upstairs and downstairs, two self-contained flats, and hot and cold water to each bedroom. On the ground floor there would be three offices, three large sample rooms and an open-air beer garden. [20]

Consequently, in an historic ceremony on Friday 16 November 1951, Mr E Phillott, chairman of the Winton Shire Council, and Mr A J Wehlow, retiring shire clerk, turned the first sod on the site of the proposed new North Gregory Hotel. [21] Construction commenced in 1952.

As the new building neared completion, the Winton Shire Council sought a suitable person to manage their modern first-class hotel. Out of five applicants, the council chose Mrs Catherine Stanners. At the time, she was managing the Grand Central Hotel, Queen Street, Brisbane, a popular rendezvous for western visitors. [22]

Mrs Stanners was well-known throughout central and north western Queensland. For 14 years in the late 1920s and 1930s, she held the license of the Commercial Hotel at Longreach [23], an establishment with a long and calamitous history, just like Winton’s North Gregory Hotel. I’ve written previously about the four incarnations of the Commercial Hotel, Longreach, in Postcards of Early Longreach (March 25, 2017).

Completed and open to the public – at last

The newly-completed North Gregory Hotel opened to the public on 22 January 1955. As is customary at the opening of a new hotel, the licensee offered patrons free beer, 60 gallons of which they consumed in the air-conditioned bar and lounge, and the (outside) beer garden. [24]

Commentators described the new North Gregory Hotel as “Australia’s most modern country hotel”. The stunning red-brick edifice was unlike any other building in Winton, and nothing at all like the building it replaced. A massive structure, its final cost (₤215,000) was well beyond its initial estimate (₤90,000). [26]

The new North Gregory Hotel was a triumph not only for Eddie Hegvold, the architect, but also for Jack Mulholland, the consulting engineer, who supervised all aspects of the build. With its smooth wall surfaces, sharp edges, simple lines, symmetry, repetition of elements, “modern” man-made materials inside and out, vibrant contrasting colours and bold sleek fittings, the result was an Art Deco masterpiece.

The hotel’s claims to fame

The fourth North Gregory Hotel is 65 years old this year. Clearly, it has survived much longer than any of its predecessors. This should not be surprising, though, as it was built to last. 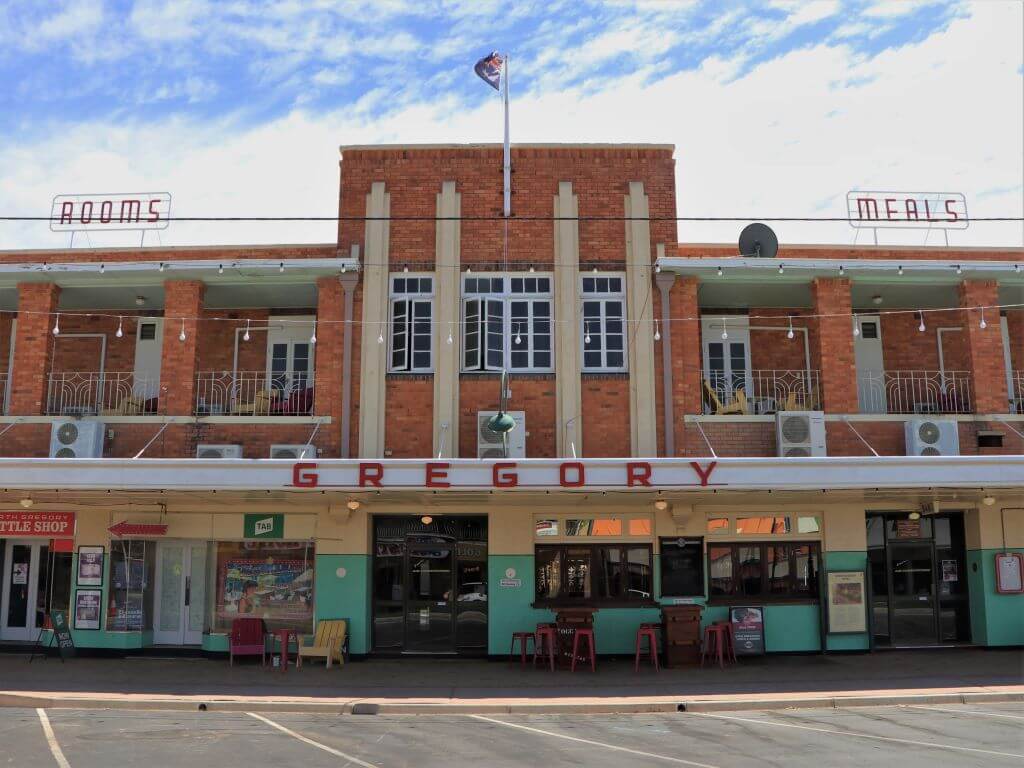