Mohamed and his Lamb Biryani

Last year, he offered to cook Lamb Biryani (a traditional Indian mixed rice dish) for my husband and me. We invited him to prepare it at our home, in our kitchen, so we could observe the process and share the meal with him afterwards. He agreed, and we invited three of our mutual friends to join us for the meal.

At 4:00 pm on Saturday 14 November, as arranged, Mohamed arrived at our home. He brought all the ingredients for Lamb Biryani and Yoghurt Raita with him, along with a very large heavy-bottom cooking pot. It was clear to me that he had purchased sufficient ingredients to cook for a dozen people, not five or six! I said so, but Mohamed was not perturbed. He was so excited about this opportunity to show us how to prepare and serve a traditional Indian meal, and to share it with us: He was a man on a mission!

Mohamed was instantly likeable. A small dark-skinned, bearded young man with twinkling dark brown eyes and a wide smile, he came across as jovial and friendly. He and I made an immediate connection.

Whenever someone new joins our group, we ask them where they come from and how long they have been in Australia. “I’m from India”, Mohamed told me. “From southern India. I came to Australia in 2012.” He said he wanted to join our group to improve his English, especially his pronunciation and his understanding of “Australian” English. And he also wanted to make more friends in Brisbane.

Mohamed works as a laboratory technician at an Islamic school in Brisbane. “It’s a good job,” he told me. He is more than well qualified for this position: He has a bachelor’s degree in microbiology, a graduate diploma in medical laboratory technology and a partially completed master’s degree in business administration. He has applied to the Australian Government for a visa that will allow him to live permanently in Australia.

From early childhood, Mohamed dreamt about coming to Australia.

At school he heard about kangaroos, animals that fascinated him. He also learnt that Australia is the world’s largest island, the smallest continent, and that it has a small population, kind people and a great cricket team. Of course, Mohamed loves cricket! Every boy growing up in India plays cricket and knows about cricket.

Mohamed plans to visit Sydney’s Opera House, the MCG (Melbourne Cricket Ground) and the Great Ocean Road (Victoria). He told me that most parts of India have a “great ocean road”, which skirts the coastline just like the one in Victoria! Mohamed has read stories about Australia’s first inhabitants, the Aboriginal people, which also interest him. He said proudly that he has learnt the Australian National Anthem (“Advance Australia Fair”).

Mohamed wants to call Australia home. He said: “I am very happy here. It’s my second home. The people here are nice and very friendly.” After attending Conversational English @ St Andrew’s for some months, he told us we were like “family” to him. He began to call me his “Aussie Mum”. In text messages, from time to time, he writes, “I like you as my Mom”.

Mohamed’s own mother died several years ago, tragically, in a boating accident. She was just 42. He misses his mother greatly. Mohamed told me that he really loved her and they were very close. He was his mother’s only son.

Born in 1987, Mohamed was the second child of a Tamil Muslim family.

The family lived in Periyapattinam, a large village of almost 10,000 inhabitants in the southern Indian state Tamil Nadu. A significant proportion of the villagers are Tamil Muslims. The village is located just 16 km by sea from Sri Lanka. Mohamed says the majority of men in the village are fishermen. Mohamed’s father worked as a fisherman, but is now retired. Mohamed has two sisters who are both married with children of their own. One lives in Periyapattinam, the other in Saudi Arabia.

I asked Mohamed to tell me a little more about his family. He said, “They are very generous, hospitable.” He added that his father’s father and his mother’s father (his grandparents) “struggled a lot”. Clearly, life had been tough for them. However, about his immediate family, he said, “We are doing okay”. He described his family as “middle class”. Mohamed and his two sisters received a good education.

Mohamed did well at school. He attended the government Higher Secondary School in his village. After completing Year 12, he relocated to Chennai, the state capital, 560 km north of Periyapattinam, to further his studies. He attended the University of Madras (2004-2008), where he gained a Bachelor of Microbiology, then Loyola College (2008-2009), a Jesuit institution associated with the University of Madras, where he obtained a Graduate Diploma in Medical Laboratory Technology.

Upon completion of his university studies, Mohamed worked for one year as a microbiologist in the laboratory of the Billroth Hospitals, Chennai. Restless to travel and further his studies, he sought and was successful in gaining a scholarship to study a Master of Business Administration (MBA) in London. It was during Mohamed’s time in England that his mother died; he returned to India before completing his MBA. Around the same time he was granted a visa to work in Australia, an opportunity he had long been seeking. This was the fulfilment of his childhood dream!

Mohamed is a practising Muslim. He participates in the discussion groups at Conversational English @ St Andrew’s, but rarely stays to share food with us (if he does, he eats only bread) and doesn’t stay for the Bible Study. This is not surprising, given his Islamic faith.

We welcome people of any faith or of no faith, and any racial or cultural background, to participate in Conversational English @ St Andrew’s. Participants are under no obligation to stay for the entire program, even though we encourage them to do so. Each person who joins us is treated with openness and respect, and offered friendship and warm hospitality. In addition to Bible Study (in which we teach participants about Jesus and the Bible), we regard this as an important part of our Christian witness. Participants are made aware that the program is organised and led by Christians, and is a ministry of our church. We don’t attempt to hide the fact.

I was surprised when Mohamed offered to cook a meal for me and my husband, and agreed to come to our home to prepare it and to eat with us.

As a follower of Islam, was he permitted to do so?

During the meal at our home I asked Mohamed directly, “What would your Muslim leaders and your colleagues at school say if they knew you were here, cooking for us and eating with us, in the home of Christians?” Mohamed replied: “In India, where I come from, I have friends who are Christian, Hindu and Muslim. We mix freely. We make no distinction. I attended Loyola College – it’s Christian.” My concern for him was clearly without foundation. He said, “Sharing food with others – this is the Indian way. It’s our culture.”

He was obviously delighted that we had invited him into our hearts, and home, and kitchen. I think this was the first time that Mohamed had been invited to share a meal in the home of an Australian Christian family. To him, being with us felt like real “family”.

Unfortunately, we had to wait a long time for the lamb to be cooked and tender. (I think the meat may have been mutton rather than lamb.) Mohamed said that he should have used a pressure cooker to cook the meat, which would have halved the cooking time. Throughout the process, a fragrant aroma filled the kitchen and living room, whetting our appetites. By the time the meal was served, around 8:30 pm, we were all ravenous!

Five of us shared Mohamed’s Lamb Biryani and Yoghurt Raita. Both were delicious! After singing “Thank you Lord for giving us food” (one of the meal graces I teach participants at Conversational English @ St Andrew’s), we ate. And we ate. I think one or two of us had at least three helpings; I certainly had two.

Mohamed didn’t skimp on the ingredients he purchased or the quantity of food he prepared for us. Not only was there lots of Lamb Biryani left over after the meal that evening, but also a large quantity of unused ingredients that Mohamed insisted I keep. For example, he purchased a 5 kg bag of basmati rice, used about 1 kg, and left the remainder for me to use. And there were leftover onions, chillies, tomatoes, yoghurt and a packet of spice mix. I was quite overwhelmed by his generosity!

I continue to have contact with Mohamed. For example, while Tony and I were away overseas for two months, from late November 2015 to late January this year, Mohamed and I kept in touch by exchanging text messages. We still keep in touch this way.

We met again recently when he attended Conversational English @ St Andrew’s for the first time this year. It was a happy reunion.

I missed my friend Mohamed.

Perhaps, like me, you have family members or friends in India facing daily trauma due to the COVID-19 pandemic. For me, it’s my friend Mohamed. He’s been in touch with me a number of times since the pandemic began. He feels he can share with me, which is a good thing. Mohamed is a permanent resident of Australia, but presently he’s stuck in India.

I met Mohamed in 2014, when he was living and working in Brisbane. He worked as a laboratory assistant at a Brisbane secondary school. In February 2020, after an absence of nearly 10 years, he returned to India for a short visit, but (due to the Australian border closure from March 2020) could not return to Australia.

Life is hard for Mohamed at present. He can’t get work in India, because employers say he’ll leave on the first available flight. And there’s no government support (like the Australian Government’s former JobKeeper Payment).

Mohamed contacted me again this morning and shared his fears. He has registered to come home and lives in hope that it will be soon.

I miss my friend Mohamed. 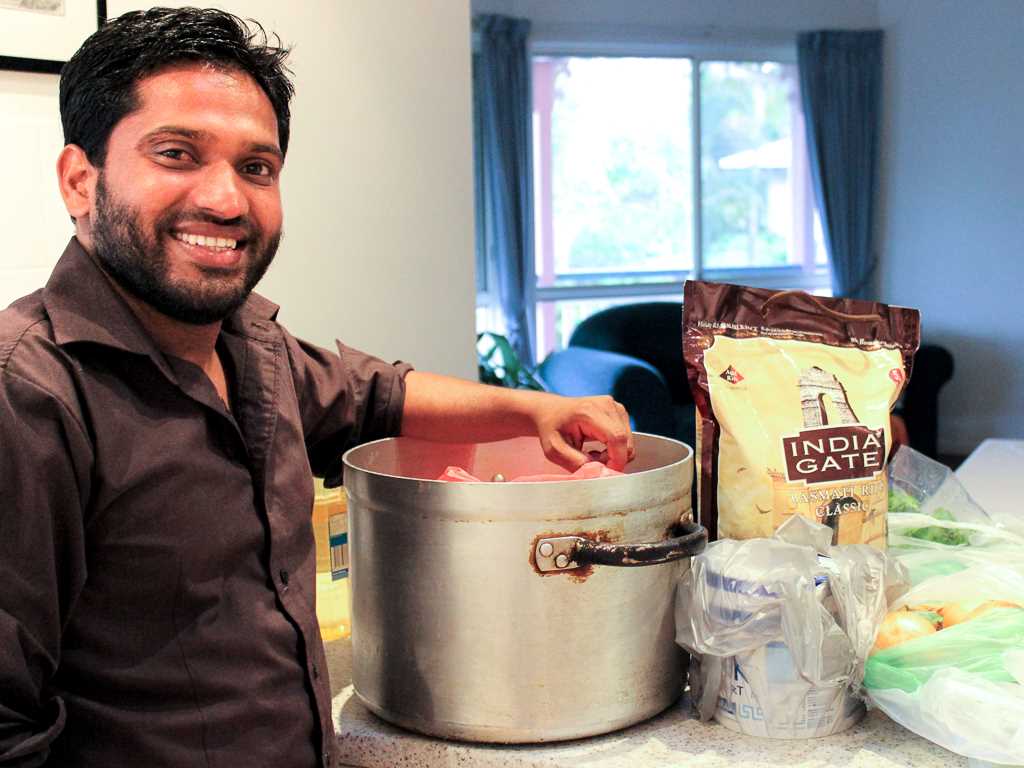 4 thoughts on “Mohamed and his Lamb Biryani”