My father: A Croatian-Aussie battler

This story is a tribute to my father, Petar Salečić (also known as Peter Salecich), who was born in a small Croatian village on this day, October 16, 99 years ago. It’s an abridged version of the eulogy I delivered at his funeral service that was held in Brisbane (Queensland, Australia), on April 17, 2009.

The man I knew as my father

The man I knew as my father was strong, patient and hard-working. He was fully dedicated to everything he put his mind and hands to do. He loved his wife and family and demonstrated this by providing and caring for us throughout his working life. I remember him as a stubborn, tough, proud man.

My father was not a demonstrative person and he found it hard to express his feelings. He was shy and retiring. Nevertheless, he had a wonderful sense of humour and was witty and clever with words. What is really surprising is that he could make jokes that cut across two languages: his native Serbo-Croatian (as it was known at the time) and his second language English. He was a great storyteller and my brother and I loved to hear him tell these stories over and over again.

Throughout his life he was interested in world events, history, music and sport. He always watched the TV news and read the newspaper from cover to cover. In his later years, he followed the Brisbane Broncos (National Rugby League, NRL), the Brisbane Roar (soccer) and the Brisbane Lions (Australian Football League, AFL). He was gifted musically, able to sing well (he loved to sing) and he played a couple of musical instruments.

My father’s life was not an easy one, but he never complained. He took things in his stride and (while he was well and able) made the best of the time he was allotted.

Petar Salečić was born in the village of Smokvica, on the island of Korčula, Hrvatska (Croatia), on October 16, 1919. He was the seventh of eight children born to Antun and Mara Salečić. He grew up in Smokvica, attended the village school to 6th grade and, as most young men did in those days, left school to work on the family properties.

As a young man, Petar participated in village life through sporting activities, the Sokolski Club and Smokvica’s People’s Brass Band, to name a few. During World War II he served first in the Yugoslav Navy until it was disbanded and later joined Tito’s Partisans serving for 2 years 6 months and 17 days. My father was very specific about the length of time (suggesting he counted the days until the war, and his military service, came to an end).

Marriage and a home in Korčula

In 1951, after a long courtship interrupted by the war, Petar married Anđelka Tomašić. The couple made their home in Korčula. They had two sons. I was their first, born at home in Korčula, and five years later, in Dubrovnik, my brother Dušan (also known as Dushen) was added to the family.

After the war Petar worked as a clerk on a nearby island, Badija, where he resided during the week. Eventually he secured a job as a painter at the Domince naval shipyards at Korčula, which (I’m sure) was a great relief for my mother.

A move to Australia

In 1956, life for our family changed forever. Two of Petar’s brothers who had migrated to Australia encouraged him to come to Australia where (they claimed) there were more opportunities for him and his family. So, in May 1956, Petar boarded the Paolo Toscanelli at Trieste, Italy, bound for Australia.

Two and a half years later, my mother, brother and I followed. We travelled on the ship Toscana. (I have written about this previously, in From Korčula my island home to the canefields of Fishery Falls, September 6, 2017). In late November 1958 we joined my father at Fishery Falls, just south of Cairns, North Queensland, where Petar (now known as Peter) had obtained work cutting cane on the Zanetić family farm.

From Fishery Falls to Freshwater

In 1960 the four of us moved to Freshwater, north of Cairns, to a house Peter bought in 1958 (at first it was rented out). Over the next 8 years, my father worked in various jobs in the area – cutting cane in the harvest seasons, as a labourer on tobacco farms at Mareeba and at Rankine’s sawmill at Stratford, as a painter and one year he spent 3 months working at Wiepa (a small town on the tip of Cape York Peninsula, 820 km by road north west of Cairns).

It was during our time at Freshwater that the four of us became Australian citizens. Despite his limited schooling, Peter mastered English, a second language, through initial instruction at Freshwater and self-education over the next 10 years or so. Although he was shy and felt he couldn’t speak English very well, he was determined to be competent in the language. And he was!

A move to Brisbane

In 1969, our family moved yet again, this time from Freshwater (Cairns) to Brisbane. I was about to commence tertiary studies in Brisbane, and our parents wanted to keep the family together. It was a bold move. Neither of our parents had jobs to go to. Nevertheless, Peter soon found work at a tannery, although this was only short-term. For many years he worked as a builder’s labourer on various building sites in the city and he ended his working life as a cleaner. When we moved to Brisbane, my father was 50 years old, and (as I recall) he retired when he was about 60.

It must have been in the late 1970s when we (his family) realized that all was not well with Peter. Although always a quiet retiring person, my father became more and more withdrawn and (at times) paranoid. He would lay for hours on his bed, uncommunicative and often asleep. My mother couldn’t cope with his changing moods and (often) irrational thoughts and claims. The diagnosis: Peter had bipolar disorder. Sadly, this illness blighted him and our family for the next 20 years or so.

From the time of his diagnosis, we (his family) were all on a steep learning curve, as we struggled to deal appropriately with Peter’s mental illness and provide him with the right kind of help and support he needed. Peter was unwell throughout most of the 1980s, including the period prior to Anđelka’s untimely death in 1988. (I shared my mother’s story earlier this year in Anđelka Salečić: A New Australian, June 24, 2018.)

In the early 1990s, Peter spent a few years in residential care at the Pine Lodge Home for the Aged, Rocklea. This was a dark period for him and our family. In 1997, he came to live with Dushen and Ellen and family in his (and their) new home at The Gap. Dushen and Ellen cared for him from that time on.

Over time, and with improved medication, Peter’s condition improved. This was particularly so in the last 6-7 years of his life. Our father (and grandfather) came alive again. Despite his increasing frailty, here was the person we once knew. We were amazed by this transformation. During this period, Peter attended and enjoyed day respite at Blue Care Ashgrove and received in-home personal care by Blue Care support workers.

One of my father’s legacies is the love of music and musical ability he passed on to our children and grandchildren. Our son Daniel is a professional musician – a violinist and composer – and he composed “Elegy to Peter”, a duet for two trumpets, for his grandfather’s funeral service. Daniel lived in Vienna at the time and was unable to attend the funeral.

About his composition Daniel wrote: “As I mourned, I thought a lot about Dida. I remember Dida loved music and was a brass player. He encouraged me in my career and took a keen interest in my well-being. So, I have written this piece as my contribution to Dida’s funeral – a little bit of myself is there – to honour and remember him. It is in the style of new classical music.”

In preparing the Order of Service brochure for our father’s funeral, my brother and I chose (for the front cover) two quotes to exemplify Peter’s earthly life. Here they are, with their English translations.

Our Father who art in Heaven … Give us today our daily bread. (Jesus Christ, Matthew 6). 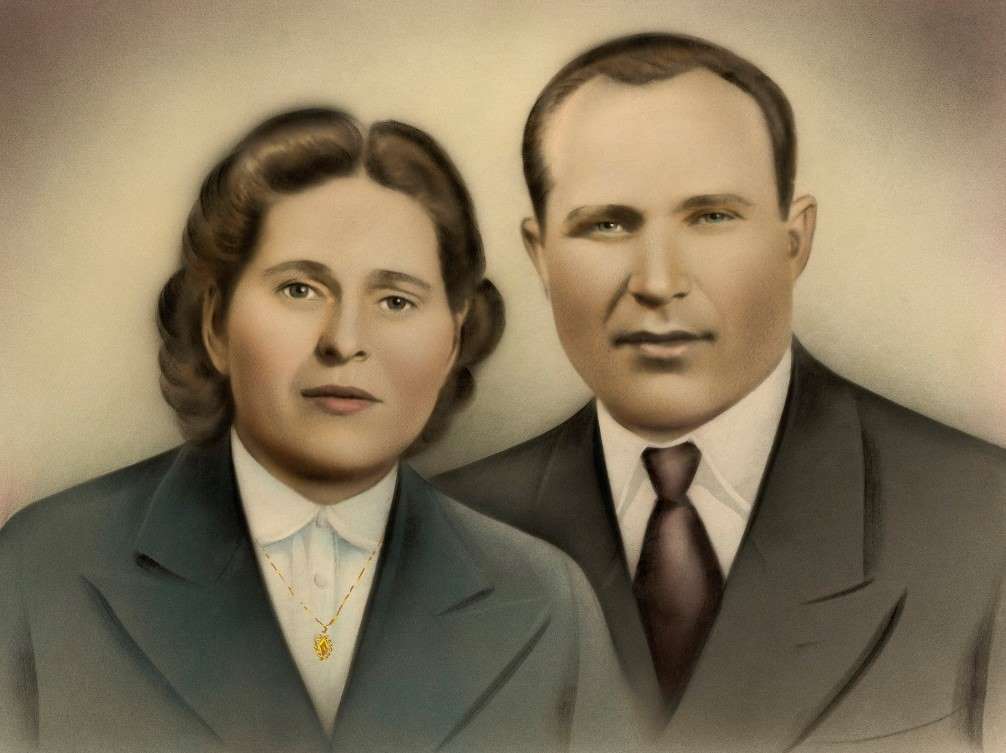 12 thoughts on “My father: A Croatian-Aussie battler”