I have fond memories of my mother’s two-layered Ginger Sponge cake. It was one of the cakes she included in her Saturday morning baking and slices of which ended up in my school lunchbox the next week. Another cake my mother often made was a Kentish Cake, which I’ve written about previously (May 21, 2016).

Recently, I went looking for my mother’s Ginger Sponge recipe. I found a handwritten copy in one of her recipe notebooks. As you can see, it’s a recipe for a large cake – too large for the two small sandwich cake tins I own. “The recipe looks good, but I’ll have to halve the ingredients,” I concluded.

Gingerbread, despite its name, is not a bread. You may be surprised to learn that “gingerbread” refers to all baked sweet foods that are flavoured with ginger and other spices (such as nutmeg, cloves, cinnamon) and sweetened with honey, sugar, syrup or molasses.

Apparently, gingerbread men date from the time of Queen Elizabeth I, who served these sweet spicy figurines to foreign dignitaries. Today, gingerbread men and their equivalents are popular at Christmastime. In 2015, I took the following photograph of gingerbread snowmen on sale at the Christmas markets in Nuremberg, Germany.

At Christmastime my daughter and grandchildren like to make a gingerbread house. Often, they purchase a “kit house” that they construct by “gluing” precooked gingerbread pieces together with icing. Not that they find it easy to make the house stand up!

According to food historians, gingerbread houses were popularized by bakers in Europe in the 1800s after the Brothers Grimm published Hansel and Gretel in 1812. In this tale, a brother and sister lost in a forest discover a house made of gingerbread and other sweet delights. Being hungry, they begin to eat. The only problem is that the house belongs to a wicked witch!

Ginger comes from a flowering plant (Zingiber officinale), which thrives in tropical and sub-tropical areas with high rainfall and warm, humid conditions. The ginger we use in cooking comes from the plant’s rhizomes, underground horizontal stems, commonly called creeping rootstalks or simply rootstalks.

Ginger originated in the islands of Southeast Asia, and from there it spread throughout the Indo-Pacific region. It was one of the first spices exported from Asia to Europe. Today, ginger is cultivated in many parts of the world, including Australia, with India the world’s leading producer of ginger (2.8 million tonnes, or 32% of the world total in 2018).

Most of Australia’s ginger is grown in the Sunshine Coast and Wide Bay-Burnett regions of Queensland. The largest and best-known producer is Buderim Ginger, located on Queensland’s Sunshine Coast. The commercial operation was established in the 1940s, when five Buderim farmers formed The Buderim Ginger Grower’s Cooperative Association Limited, and since then it’s gone from strength to strength.

Ginger is available in four forms: green, ground, preserved, and crystallised. All four are suitable for use in cookery.

#1. Green ginger: The fresh rootstalks (rhizomes) of the ginger plant.

Green ginger is light brown on the outside and pale yellow on the inside. To taste, green ginger is slightly peppery and sweet. When cut, it has a strong, tangy aroma.

Ground ginger has a fine texture and is light tan in colour. It’s the form commonly used as a flavouring in gingerbread and ginger drinks (such as ginger beer, ginger ale). The flavour of ground ginger is described as spicy, warm and slightly sweet. The Ginger Sponge recipe featured in this blog post lists ground ginger as an ingredient. You can substitute green ginger for ground ginger at a ratio of six to one, although the flavours of fresh and dried ginger are a little different.

#3. Preserved ginger: Cleaned, peeled rhizomes are cooked in a sugar syrup, then sealed with some of the syrup.

#4. Crystallised ginger: Treated as for preserved ginger, but cooked longer, then drained and rolled in sugar.

Crystallised ginger is one of the special ingredients of my Chocolate Slice (December 23, 2020) and an optional ingredient of Health Slice (May 20, 2019) and Fail-Me-Never Steamed Pudding (August 3, 2016).

Australian home cooks have had access to ginger cake recipes since the early 1900s. If you search for “Ginger Cake” on Trove, you’ll find lots of recipes, dating from about 1910. Most use ground ginger, although a few use chopped preserved or crystallised ginger as ingredients. Clearly, gingerbread was promoted as a good choice for home cooks. Remember, there were 10 recipes for gingerbread and ginger cakes in my mother’s 1934 Cookery Book!

To make my ginger cake, I used the Ginger Sponge recipe from the 1934 Cookery Book. It is identical to my mother’s handwritten recipe, but half the size. The result? Well, put simply, I’ll be making this cake again.

I commend this old-fashioned Ginger Sponge recipe to you. Why?

If, like me, you love the flavour of ginger, why not give this old-fashioned Ginger Sponge recipe a try?  I don’t think you will be disappointed. 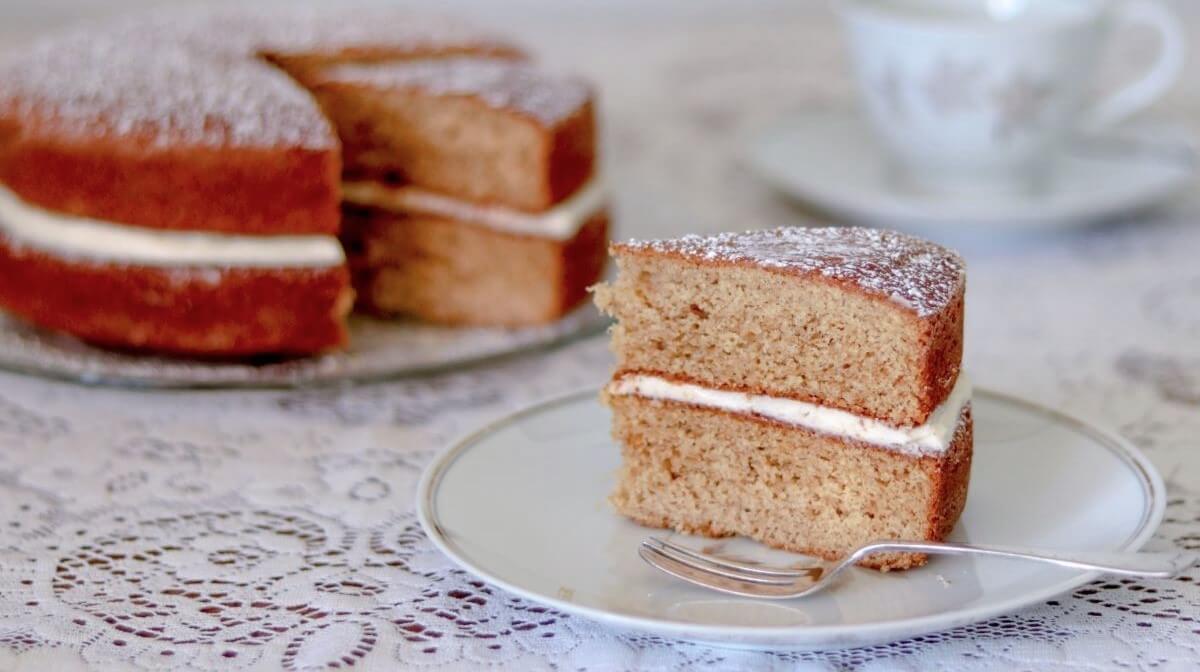