Plain yoghurt, natural and unsweetened: I love it. I always have a tub in my ‘fridge and it’s always on my shopping list. It’s so versatile. In this post, I share a little about yoghurt generally, some of the ways I use plain yoghurt and two really simple and healthy low-fat plain yoghurt recipes for you to try.

What is the origin of yoghurt?

As I recall, yoghurt started appearing in supermarkets and foodstores in Australia in the 1970s and 1980s. Yoplait brand sweetened yoghurt, for example, was launched in Australia in 1982 (Australian Food History Timeline). Packaged and sold in 200 g tubs as a twin pack, in flavours such as apricot, peach, berry or vanilla, it was quite a novelty, and lots of Australians (like me) bought yoghurt for the first time. According to Jan O’Connell (Australian Food History Timeline), “prior to 1982, yoghurt was consumed mainly by recent immigrants and health fanatics”.

Yoghurt may have been new to the vast majority of Australians in the 1980s, but it is certainly not a new foodstuff. It has been enjoyed as a food in some parts of the world for thousands of years. Yoghurt was popular in ancient Egypt, Rome and Greece. It has been part of the diet of the people of Central Asia, the Middle East, India, Central Europe and Southeastern Europe for centuries. It is claimed that yoghurt fermented from sheep’s milk was invented 4000 years ago by the early inhabitants of Bulgaria.

The English word “yoghurt” (or “yogurt”) is Turkish in origin. In fact, yoghurt is such an integral part of Turkish cuisine and culture that several Turkish proverbs refer to yoghurt. Here are a couple of examples:

The one who burns his mouth for drinking milk hot, eats even yoghurt carefully.

Meaning: Life’s bad experiences teach us to be more cautious.

He who wants yoghurt in winter must carry a cow in his pocket.

Meaning: If you want something that is difficult to achieve, you must be willing to put in the effort to obtain it.

Do you know that yoghurt is also mentioned in the Bible?

Abraham and Sarah fed it to their three unexpected visitors at Mamre (Genesis 18). According to Genesis 18:8, Abraham served his guests some yogurt and milk together with the meat from one of his choicest calves.

It’s a milk product. Most yoghurt is made from the milk of cows, sheep or goats. Bacteria added to warm milk converts the lactose (the sugar component of milk) to lactic acid, a process of fermentation, which thickens the milk and gives the resulting product (yoghurt) a tangy or sour taste.

How and when did I get “hooked” on using yoghurt?

At first, in the 1980s, I bought sweetened fruit or flavoured varieties of yoghurt as a sweet snack food or a simple dessert for the family. It took a while for my husband and the children to acquire a taste for this slightly sour custard-like food.

By the 1990s, plain yoghurt started to get a mention in recipe books in Australia and New Zealand, but mainly as an alternative to sour cream. The odd book included recipes for Indian curries that used yoghurt as an ingredient. By the 2000s, it was common for recipe books to feature recipes that use yoghurt either as the main ingredient (such as Raita and Tzatziki) or as one of several ingredients (as in cakes and muffins).

I like to try new recipes. I studied science at university, so experimentation in the kitchen seems natural to me. Nevertheless, my main aim is to provide my family and guests food that is delicious and interesting, but also healthy. No wonder I got “hooked” on using yoghurt, low-fat plain yoghurt in particular.

Here are some of the ways I use plain yoghurt in my cooking and food preparation:

I add plain yoghurt to my homemade soups, especially thick pureed vegetable soups like Pumpkin Soup, Carrot Soup and Potato and Leek Soup. To serve, I drop a large dollop of yoghurt into the centre of the bowl and gently swirl it around the soup to make a pinwheel-like pattern. To garnish, I sprinkle on top finely chopped fresh herbs or ground black pepper. It looks and tastes great!

I use plain yoghurt in smoothies (a thick smooth drink made from pureed fresh fruit, milk and milk products). The idea came from Donna Hay’s 2012 recipe book “Fresh and Light” (Harper Collins), in which she shared recipes for six different “power smoothies”, four of them using plain yoghurt as an additive. Here is one of her recipes, and my variation of it, both of which I highly recommend. Not only are they really healthy but they taste delicious too!

My variation: Strawberry and Wheatgerm Smoothie
Prepare as above, replacing the mango and orange juice with one cup of fresh strawberries (6 large or 8 small strawberries) and 1 tablespoon of honey.

3. In dips and sauces

Hummus is a dip I often prepare as an appetizer when I have guests. It uses plain yoghurt. I like to serve it with toasted pita bread and crisp vegetable sticks. Homemade hummus is healthy and simple to prepare. I heat 2 tablespoons of olive oil in a small pan, add 1-2 cloves of crushed garlic, 2 tablespoons of sesame seeds and cook, stirring, for about 2 minutes until the seeds are lightly browned. Next, I process the seed mixture with 300 g chick peas (about 1 cup of cooked chick peas), 1 tablespoon of lemon juice, 1/3 cup of plain yoghurt and salt and pepper (to taste). It’s as easy as that!

4. In curries and their complements

Tony and I love curries, especially Indian curries. Many of the curries I like to make use plain yoghurt as an ingredient: Rogan Josh, Butter Chicken and Lamb Korma. Yoghurt is an essential ingredient of a tandoori marinade for chicken or lamb. A friend, Lorna Clarke, gave me a wonderful recipe for Curried Spinach (or Silverbeet) with Red Lentils, which I make often, and I serve it with pappadums and plain yoghurt as an accompaniment.

Our Indian-born friend Sonal always cooks a delicious Indian curry or two when we visit her and her husband Willis. They live in Townsville. Typically Sonal prepares a yoghurt-based Raita to accompany her curries, as shown in the photograph below (front right).

Mohamed, another Indian-born friend, uses plain (Greek) yoghurt as an ingredient in his Lamb Biryani, which he cooked for us at our home last year. To complement the curry, Mohamed prepared a Cucumber and Mint Raita for us. You can read all about Mohamed and these two iconic Indian dishes in my story Mohamed (March 3, 2016).

5. In cakes and muffins

In my collection of recipe books, I have two that were published in New Zealand in 2003 and 2004 respectively, gifts from a dear friend, Lyn, who lives in Auckland. Lyn loves cooking and she knows I do too, hence her choice of gifts. One is called “100 favourite muffins & slices”. As its name suggests, it’s dedicated to muffins and slices. The other one is subtitled “A Festival of Winter Cooking” and it focusses on food suitable for the cooler months of the year. The latter contains a recipe for Banana Yoghurt Cake, which I bake often. It’s a real winner. I will share this recipe with you on my blog at another time.

Yoghurt is a vital ingredient of Bircher Muesli. Tony and I love the version I make. We tried Bircher Muesli for the first time when we stayed at a Bed and Breakfast (B&B) at Uki, near the foot of Mount Warning in Northern New South Wales, in 2008. Our hosts prepared the most divine breakfasts, which commenced with Bircher Muesli, a fresh fruit compote, plain yoghurt and fruit juice. We took the following photograph one morning, which I include here as proof.

Here is the recipe our hosts used, which is based on one posted on the ABC Overnights website at the time. I always use this recipe when I make my Bircher Muesli. I’ve tried Bircher Muesli many times since, at various B&Bs and hotels, but none have equalled this version. Try it: You won’t be disappointed!

Yoghurt is a healthy and suitable complement for fresh fruit. However, plain yoghurt is a little bland and also a tad sour (in my opinion), so I like to add a few surprise ingredients to make it more delectable and interesting. Hence my recipe for Yoghurt Plus. It is my variation of a yoghurt dip that a friend made and shared with me many years ago when I lived in Rockhampton. Yoghurt Plus may be used as a dip for fresh fruit slices or fruit skewers, as a light and delicate accompaniment for fruit salad or puddings such as Fail-Me-Never Steamed Pudding (August 3, 2016).

Finally, you might ask: What yoghurt should I buy?

Today, when I go shopping for yoghurt at the supermarket I am overwhelmed by the range of brands and products on offer. What about you? There must be at least a dozen different brands, and plain yoghurt comes in a range of tub sizes such as 1 kg, 900 g, 750 g, 500 g, 300 g, 200 g. We can buy plain yoghurt packaged as natural yoghurt, Greek yoghurt, Greek style yoghurt, low-fat yoghurt, no-fat yoghurt and various combinations of these. Do you remember the milk advertisement? The same applies to yoghurt!

So, what’s the difference between these various products?

I checked the composition of each of the yoghurts I purchased (pictured above).

Don’t let this multiplicity put you off. Always include plain yoghurt on your shopping list. There are so many wonderful ways to use yoghurt in cooking and food preparation.

I hope I have successfully communicated my zest for yoghurt and inspired you to give some of my suggestions and yoghurt recipes a try! 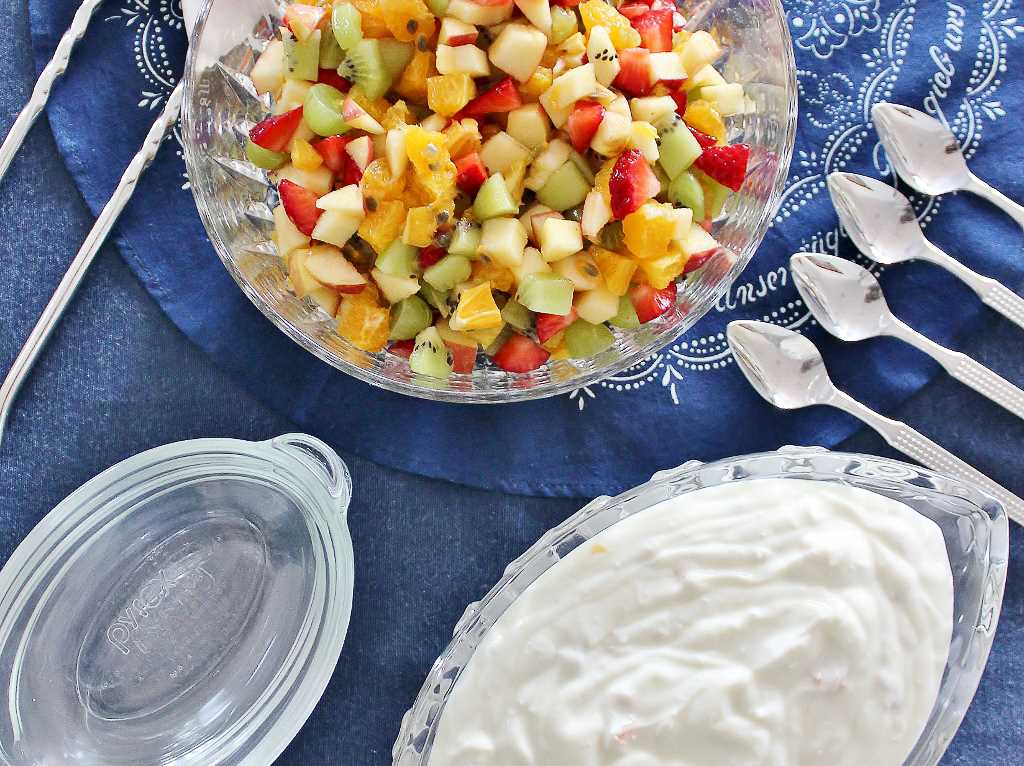