The year 1871 began on a sorrowful note.

Holiday festivities came to an abrupt end when it became known on Monday 2 January that His Excellency, Colonel Blackall, Governor of Queensland, had died. With this news a universal gloom settled on the entire population of the fledgling colony.

Colonel Samuel Wensley Blackall had been in the post only 2½ years but, during that time, he conducted himself in such a way to gain the favour of all classes of colonists. Blackall was much loved and highly respected by all the people he served, to the extent he was called “the most popular man in Australia”.

Governor Blackall’s funeral was conducted on the following day, Tuesday 3 January. It was a commemoration like none other in Queensland before or since: The people of Brisbane turned out in their thousands to pay tribute to their beloved representative of Her Majesty Queen Victoria.

Queensland’s Governor Blackall was an Irishman by birth, education and sentiment.

Samuel Wensley Blackall was born in Dublin, Ireland, on 1 May 1809. After taking his degree at Trinity College, Dublin, he joined the British army. He was appointed Major of the Longford Militia and later Honorary Colonel of the Leitrim Militia. From 1847 to 1851 he represented the County of Longford in the British House of Commons. Blackall was Lieutenant-Governor of Dominica (in the West Indies) from 1851 to 1857, Governor of Sierra Leone (West Africa) from 1862 to 1865 and Governor-in-Chief of the West African Settlements from 1865 to 1867. In 1868 he was appointed Governor of the colony of Queensland, Australia.

Colonel Blackall (as he was then known) arrived in Brisbane on 14 August 1868. From the time he set foot on this land, he regarded Queensland as his home. Although he came here as a complete stranger, he made every effort to become familiar with the country and its resources, the people and their needs and desires. It soon became clear that Blackall’s appointment as Queen Victoria’s representative in the colony named in her honour (“Queensland”) was an excellent one.

Blackall was a kindly, good-natured man who endeared himself to all with whom he came in contact.

In fact, many of the colonists Blackall met during his public engagements regarded him more as a friend and advisor, than a ruler or master. He travelled far and wide throughout the colony and quickly gained the respect and admiration of the people. Blackall was a model governor. He never refused his patronage of bodies whose objects were to advance the material interests of Queensland or improve relations between the different classes of colonists. It was said of Blackall, he was “all things to all men” (in the best sense of the phrase).

Despite his indefatigable efforts to become “one of us”, Blackall could not deny his Irish roots.

Although he never made his (or anyone else’s) nationality a point of difference, he delighted his audiences by mentioning (by way of passing) that he was Irish and he had seen the “blarney stone”. Not surprisingly, Blackall the Irishman was loved for his infectious warmth, openness and good humour.

As in all aspects of life, Blackall faced his death cheerfully and peacefully.

For more than twelve months the governor suffered attacks of gout in the arm. When the disease shifted to his lungs, his physicians could do little to help him. Despite the dire prognosis, Blackall remained in good spirits. He was prepared for his death. Several months previously he had chosen his grave site.

In late 1870, given his declining health and realizing his days were few, Blackall inspected Brisbane’s new cemetery reserve at Toowong. Here Blackall chose his final resting place: the highest spot in the proposed cemetery. It is reported that some members of Blackall’s family wanted to return his body to Ireland for burial. However, Queensland’s second governor made his wishes plain: He wanted to be buried in Queensland, the land he had come to love.

The funeral of the late Governor Blackall was like none other in Queensland, before or since.

On Tuesday 3 January, long before the funeral started, crowds gathered in the streets around Government House. All public offices were closed for the day and shops shut around midday. From 1 o’clock nearly all of the city’s warehouses closed their doors. Almost all business in the city was suspended for the duration of the funeral.

Every aspect of Governor Blackall’s funeral was performed with great decorum and precision.

At exactly 4 o’clock, Governor Blackall’s body was carried out of Government House and placed in a plain hearse. At the same time the firing party presented arms, the flags at Government House, the Parliamentary Buildings and the Observatory were lowered from half-mast, and the first of 17 minute guns positioned at Queen’s Park fired a salute.

Immediately afterwards the firing party made up of 70 members of Nos. 1 and 3 Companies of the Queen Victoria Rifle Brigade marched slowly with reversed arms along the avenue towards the gate, followed by the re-assembled Volunteer Band playing “The Dead March”. They would lead the procession down Margaret and William Streets to St John’s Anglican Church.

The funeral procession comprised at least 4000 people by the time it reached the church.

After the firing party and the band came the undertaker (Mr George Petrie), members of the clergy, the hearse (bearing Blackall’s body) and pall bearers, chief mourner, members of His late Excellency’s family and household, His Excellency Colonel O’Connell (acting governor), judges, members of the Legislative Council and Legislative Assembly, civil servants (about 100, representing all departments), foreign consuls, mayor and councillors of Brisbane, mayor of Toowoomba, members of the Order of Oddfellows, Foresters, the volunteer fire brigade and, finally, civilians (eight deep).

How fitting that so many ordinary citizens joined the procession.

It was the late governor’s wish that every person who so desired – from the least to the greatest – was welcome to participate in his funeral cortège.

At the church (which was packed to overflowing) the Right Reverend Dr Edward W Tufnell, the (first) Anglican Bishop of Brisbane, conducted the burial service. Dr Tufnell was assisted by Reverend Mr J Sutton and a number of other Anglican clergy.

At the conclusion of the church service, the funeral procession recommenced.

The hearse came next, followed by carriages bearing the chief mourners, medical attendants, servants of the late governor’s household, His Excellency Colonel O’Connell, judges, clergy, members of both houses of Parliament, foreign consuls, mayor and councillors of Brisbane, mayors of Ipswich and Toowoomba and other dignitaries. Last of all there were carriages conveying a large number of ordinary citizens. Altogether there were 120 vehicles. One hundred and thirty (130) horsemen brought up the rear of the procession.

The cortège reached the burial site at Toowong shortly before 7 o’clock in the evening.

Governor Blackall had selected a very beautiful site for his grave, on the top of a hill at the upper end of the Toowong cemetery reserve. Here Rev Dr Tufnell and his assistants conducted a graveside service. At the conclusion of the service, the firing party fired three rounds over the grave and the artillery fired a salute of seventeen guns. Thus ended the day’s solemn proceedings: what I have dubbed “A funeral like none other”.

Queensland’s second governor, Samuel Wensley Blackall, was the first person interred in the cemetery which became known as the “Toowong Cemetery”.

My husband and I came across the grave of Sir Samuel Wensley Blackall during a visit to the Toowong Cemetery in October 2018.

Blackall’s grave, situated at the highest point in the cemetery, is marked by a huge stone monument and tapering column, the entire structure 56 feet (approximately 17 metres) high. It’s surely the most prominent edifice in the cemetery.

The inscription on a marble slab in one of the gables of the structure’s lower chamber reads: “Erected by the Parliament of Queensland to the memory of Samuel Wensley Blackall, Governor, from 14th August 1868 to 2nd January 1871, who during his short term of office endeared himself to all classes of the community.”

This impressive monument and the words inscribed on it motivated me to find out more about Queensland’s second governor and the man, Samuel Wensley Blackall.

This story is the result.

I hope, like me, you have been inspired by what you have learnt about Governor Blackall.

The memory of Queensland’s Governor Blackall lives on in a number of ways.

First, there’s the monument in the Toowong Cemetery. Soon after Governor Blackall’s death, the Parliament of Queensland set aside ₤500 to erect a fitting memorial to the much loved late governor. Queensland’s Colonial Architect, Mr F D G Stanley, designed the monument. A good example of early English gothic architecture, it was built principally of stone from Murphy’s Creek.

Second, Governor Blackall’s memory is preserved in the name of the town “Blackall” in central western Queensland.

Third, the “Blackall Range” in the Sunshine Coast hinterland of south east Queensland bears his name.

Finally, “Blackall Terrace” in the Brisbane suburb of East Brisbane is named in honour of Queensland’s Governor Blackall. 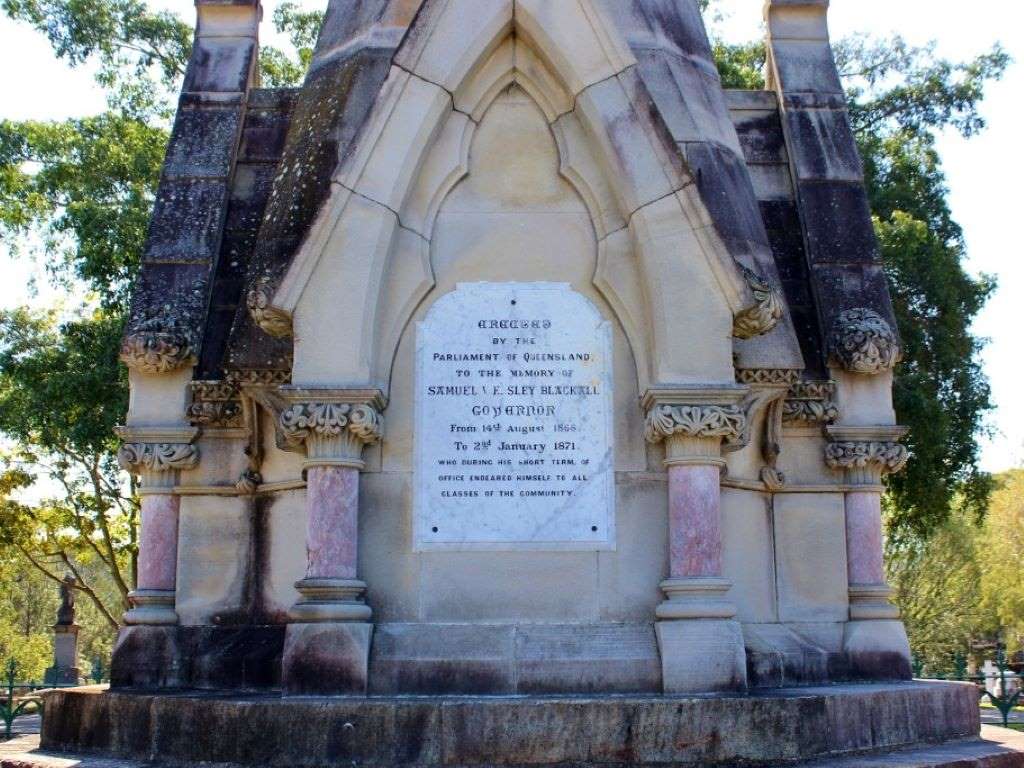 1 thought on “Queensland’s Governor Blackall: A funeral like none other”