State of Origin, cockroaches, cane toads and a cat

I’m re-posting this story to coincide with the first game of the 2017 State of Origin series, which is scheduled for Wednesday this week.

My story is a little “tongue-in-cheek”, but it has a serious side as well. Read on to discover why.

Buffy’s over 1 metre wide and 1 metre high. In May 2016, after an absence of several months, a brightly painted Buffy was reinstated in Sarina’s town centre, on a new elevated platform in freshly landscaped surroundings.

Located in Sarina beside the Bruce Highway (the main road linking Brisbane and Cairns), Buffy is one of the sugar town’s well-known tourist attractions. It’s also one of Australia’s “big things”.

Sarina’s giant cane toad was built in 1983 but it was not named until 1998. It received its name as a result of a local “Name the Toad” competition. A group of schoolchildren came up with “Buffy”, based on the cane toad’s former scientific name Bufo marinus (now Rhinella marina). Buffy is a replica of an oversized cane toad made of paper maché that appeared in Sarina’s Sugar Festival Parade in 1983.

The revamped Buffy is accompanied by a plaque providing the history of cane toads in Australia and of Buffy the cane toad.

What’s the connection between Buffy, rugby league and “State of Origin”?

Alongside the plaque about cane toads and Buffy, there’s another plaque, entitled “Legends of League”. It honours Sarina’s four rugby league footballers who represented their State and Country: Dale Shearer, Kev Campion, Martin Bella and Wendell Sailor. Between them, these four men played 66 games for Queensland and 40 Tests for Australia.

At a State level, Queensland’s main rugby league competitor is New South Wales. The rivalry between these two State teams is intense and long-running. They have been competing against each other since 1908!

The first State of Origin rugby league game between New South Wales and Queensland was played at Brisbane’s Lang Park (now Suncorp Stadium) on 8 July 1980. It was an experimental game. As a “State of Origin” competition, the players represented the State from which they originated, not the State where they were currently playing. A second game was held in 1981. The first State of Origin series proper was held in 1982. The competition, consisting of three games, has been held every year since then.

Clearly, there is something really weird about Australian sense of humour!

Why cockroaches? Why cane toads? Nobody likes them. They are pests. Serious pests.

Cockroaches are one of the most common unwanted invaders of Australian homes. These large insects are active at night – in kitchen and bathroom cupboards, in drains, on dirty benches and floors, behind stoves and fridges. They are scavengers, feeding on food scraps and rubbish.

The “Australian Cockroach” is not native to Australia as its name suggests; it comes from Asia. It is large (about 35 mm long), reddish brown in colour, with a yellow margin around its thorax and yellow edges to the front of its fore wings. Its antennae are long and its legs spiky.

I don’t like cockroaches. I don’t want them in my home. My husband and I have our house sprayed once a year to keep them at bay.

Sarina’s “Buffy” may be attractive, even cute, but, in Australia, cane toads are invasive predators.

Cane toads are native to Central and South America. They are hardy creatures with a tough outer skin and poison glands. Cane toads are omnivores (they eat plant or animal matter). They reproduce prolifically all year round, especially in the hot, wet tropics. The average adult is 10-15 cm long.

One hundred and two (102) cane toads (51 male, 51 female) were brought to Australia from Hawaii in 1935, to be used as a biological control of cane beetles. Cane beetles feed on sugarcane and are a threat to the sugar industry. The cane toads were first released in far North Queensland around Cairns, Gordonvale and Innisfail; others were released around Ingham, Ayr, Mackay and Bundaberg. Given the favourable conditions, cane toad numbers increased rapidly and their progeny spread far beyond these sugarcane growing areas. By the mid-1960s cane toads were found in northern New South Wales, by the mid-1980s in the Northern Territory, and by the 2000s in north Western Australia.

The spread of cane toads has become a major environmental problem in Australia, adversely affecting our native fauna. Here, the cane toad has no specific predators or diseases that limit its numbers. Its spread is presently out of control.

I remember there being cane toads in and around Rockhampton (Central Queensland) by the end of the 1960s.

So, what about the cat? Why is a cat included in this story?

In the mid 1960s, while living in Rockhampton, I adopted a cat. A stray. It just turned up one day at my parents’ shop. They brought him home to show me and I fell in love with him. Sammy (as we named him) was probably about a year old and still playful. He had shiny medium length black fur, bright green eyes, a loud purr and a gentle fun-loving nature. I begged my parents to let me keep him – and they did.

Sammy came along around the time my brother (my only sibling) moved away from Rockhampton for work. During his absence I came to understand what it must be like to be an “only child”. I often felt lonely. While I loved my parents and had a good relationship with them, I missed my “big” brother (he was 5 years older than me). I yearned for the fun and laughter we shared; I missed his company, even his relentless teasing.

Having Sammy as a pet helped fill the void left by my brother’s absence. Sammy was a comfort. I loved to cuddle him, stroke his soft fur, and listen to him purring. I think Sammy knew when I was feeling sad or lonely. Pets are like that. They can be almost human in expressing their emotions.

Sammy was the inspiration for a poem, Mon Chat (“My Cat”), which I wrote when I was in Year 12. I submitted it to the school magazine (Bamburu) poetry competition and, to my surprise, it won the Senior French poetry prize.

Here is the English translation of Mon Chat:

He sleeps in the old chair all day long,
the sun smiling down on him.
From time to time he plays with me:
he chases the end of a string,
he hides under the chair
looking at me with big green eyes.
At night, I cuddle him,
gently rubbing his shiny black fur:
he purrs.
Sometimes I think his heart will break with emotion.
I love him so much.
If only we could be like animals
making somebody glad every day
by a little friendship.

Just a couple of months after I penned Mon Chat, Sammy died.

It was dark, about 8.00 pm, when neighbours found Sammy in their backyard, frothing at the mouth and experiencing muscle tremors. They came and told me and I hurried over the road to their place. I found Sammy lying on a blanket under their house, clearly distressed. The scene was awful to witness. I felt sick, helpless. The vet was called and he arrived soon afterwards. He knew straight away what was wrong. Sammy’s symptoms were the result of cane toad poisoning. He said there was nothing he could do to save Sammy.

Sammy made the fatal mistake of “playing” with a cane toad that night. He ingested (or was sprayed) with the milky substance secreted by the glands located behind the cane toad’s eardrums. This substance is toxic to small animals. Within about 30 minutes of contact with the cane toad, Sammy was dead. The vet said Sammy died of heart failure. Sammy was just four years old and a much-loved pet. I was devastated.

This incident involving my pet cat confirmed my dislike of cane toads.

Believe it or not, a few months later, as part of my first year Zoology course at university, I had to dissect a cane toad. I also had to dissect a cockroach! In everyday life, I wouldn’t even touch one of these detestable creatures, so you can imagine just how much I liked performing those dissections.

Feral cockroaches and cane toads originate from neither New South Wales nor Queensland.

They are not Australian. If only we could send them back to where they came from! Sadly, it’s too late for that.

So, when you hear (or use) the nicknames “Cockroaches” and “Cane toads” for the New South Wales and Queensland State of Origin teams respectively, remember their origin, where they came from. The feral cockroaches and cane toads I mean.

Not the players. You know where the players come from. It’s a State of Origin competition after all.

What’s my family connection with State of Origin football?

My grandson, Lucas, is a State of Origin baby. Lucas was born on 5 July 2006, the same day as the third and deciding match of the 2006 State of Origin series. His father, Cameron, is pictured here proudly nursing his newborn son (his first-born), wearing a Queensland State of Origin jersey.

Cameron follows the National Rugby League (NRL) and State of Origin competitions. He and a friend watched the game that night in the hospital room with mother and new baby present. Cameron wouldn’t have missed it! Queensland won the match (and therefore the series), defeating New South Wales 16-14. The result was just what Cameron hoped for and it topped off a remarkable life-changing day.

My husband Tony also follows the NRL competition and State of Origin series. Like Cameron, he is a Queensland supporter. The following photograph, taken on 2 July 2008, shows Tony with grandson Lucas, then almost 2 years old. They are both wearing their maroons, dressed ready to watch the third and deciding game of the 2008 State of Origin series. Note the logo “Origin Babies” on Lucas’ maroon jersey. Queensland 16 defeated New South Wales 10 and won the series.

Lucas, now 10, also follows the NRL competition. He is a keen supporter of the Broncos and Queensland’s State of Origin team.

In 2014, Lucas won our family’s just-for-fun weekly NRL tipping competition. As a prize, Tony and I bought him a Queensland State of Origin replica shirt. He is pictured here, in November 2014, proudly wearing his new shirt while playing backyard cricket with Tony. Apparently Lucas still loves that shirt, although it is way too small for him now. 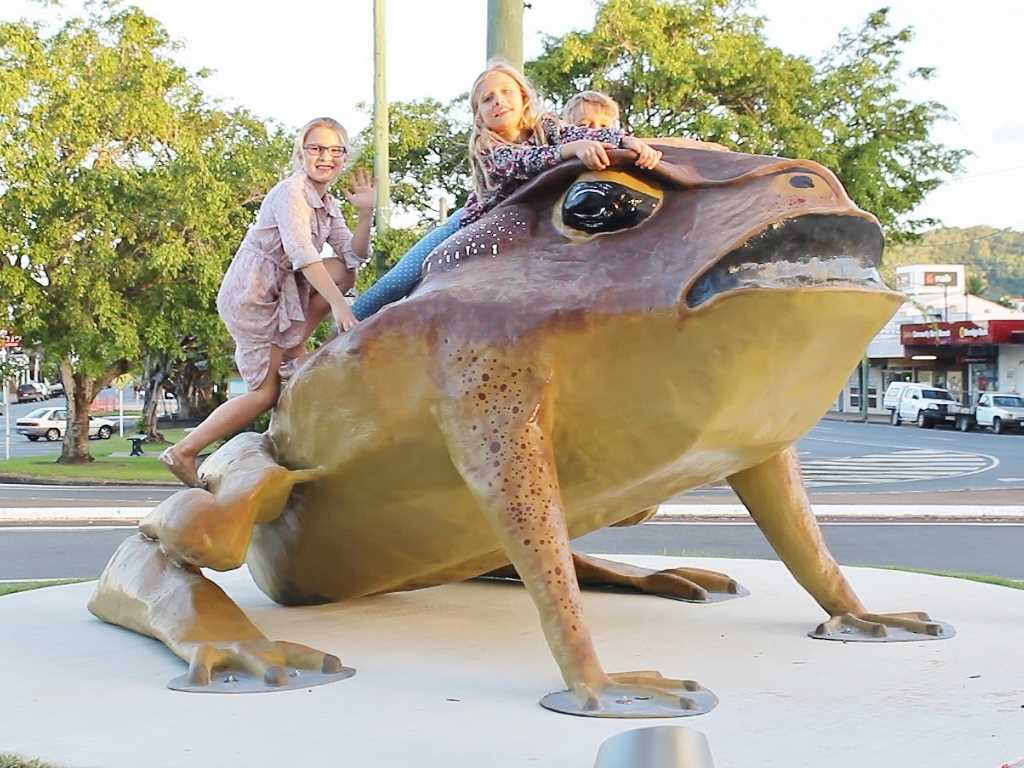 2 thoughts on “State of Origin, cockroaches, cane toads and a cat”