Earlier this year I resolved to find and reconnect with Alwyn and Fay Neuendorf. This is how I went about it.

On 16 March 2016, I posted the following message and photograph on my Love in a little black diary Facebook page:

“My dear followers, especially those of you who live in PNG. Do you know any of these people – and their whereabouts now? If so, I’d love to hear from you.

This is an Asia Pacific Christian Mission (APCM) prayer card from the 1970s. My husband Tony and I met all these folk, visited them in PNG in 1975-6, and prayed regularly for them. They are the Neuendorfs. Back row: Tom, Pate, Andrew. Front row: Rupa, Alwyn, Fay, Laevai.”

Little was I prepared for the response I received!

It was overwhelming. At the time of writing, of the 16,441 people reached, 586 people liked or loved the post, 29 people commented, and the post was shared 20 times! Many individuals sent messages to me privately as well.

What this indicated to me is just how highly respected and loved are Alwyn and Fay Neuendorf and their family, in Papua New Guinea and beyond.

My husband Tony and I met Alwyn Neuendorf in 1974.

We were second-year teachers at Blackwater State High School. Not only were Tony and I inexperienced teachers, but we were also brand new Christians. 1974 was an important year in our lives: in January we were engaged, in March we became Christians, in August we were married.

Alwyn came to Blackwater on deputation on behalf of Asia Pacific Christian Mission (APCM) to speak to the Christians about his work in Papua New Guinea (PNG). Alwyn, a missionary based in Port Moresby at the time, was home in Australia on furlough. The visit was arranged by Mr Neil McTaggart, a teacher at Rockhampton State High School and a keen supporter of the ministry of APCM in PNG and of Alwyn and Fay Neuendorf.

Alwyn stayed with us overnight.

After Tony and I married, given there was no available accommodation for married teachers in Blackwater, we set up “home” in a vacant schoolhouse in Bluff, 20 km by car east of Blackwater on the Capricorn Highway.

It was to this humble little cottage in Bluff that Alwyn came to stay.

As recent newly-weds and still learning as a couple how to entertain guests, we felt proud and excited to have this godly, wise and interesting man stay with us. We made an immediate connection with Alwyn.

Alwyn’s stay was a special time of Christian fellowship and learning for Tony and me. Ever since I’ve known Tony, he has kept records of quotable quotes and noteworthy sayings. In a notebook Tony commenced in 1974, the very first record are words of wisdom Alwyn Neuendorf shared with us during that visit on November 12, 1974:

God has a point of view for every situation we face. The Bible presents God’s point of view. Christianity is not a myth or a theory, it is a way of life. God requires that every student work to the best of his or her ability.

Three weeks later, Alwyn returned to Bluff and brought the four “Neuendorf boys” with him.

The five of them stayed with us for a couple of days. What a great privilege it was for us to meet and get to know Andrew, Laevai, Rupa and Tom. They gave us the following “Thank you” card after their stay. We loved the card they chose (Image 1) as well as its message inside (Image 2). We still have it after all these years!

Alwyn is probably not aware just how much an impact he had on our lives.

For example, it was during Alwyn’s second visit to Bluff in 1974 (when he brought his four boys) that he introduced Tony and me to Living Light, thematic selections of Scripture from The Living Bible. He and his boys read Living Lightmorning and evening. Tony and I liked Living Light so much that we purchased a copy soon afterwards (our copy is dated December 1974) and used it as part of our daily Bible reading regime for the next 20 years or so!

Throughout these years, it never ceased to amaze us just how often the Scripture passages in Living Light related to our circumstances at the time. One instance is how the Lord used my daily readings from Living Light in December 1983 to prepare me for my aunt’s death (read Auntie Dulcie and the Bung-in Cake).

Commencing with our meeting in 1974, Alwyn became for us a significant Christian role model and mentor.

Like Tony and me, Alwyn was a teacher. But he was much more. He was a visionary, Christian leader, educator, Bible translator, administrator. Alwyn may not remember, but his ministry and example inspired us to pursue theological studies, which we did during the 1980s and 1990s, externally through Moore Theological College Sydney (both of us) and the Australian College of Theology (Tony). Our lifelong commitment to Christian ministry in schools (Religious Education, Inter-School Christian Fellowship, Scripture Union camps and school chaplaincy) can be attributed in part to our connection with Alwyn and Fay, and their example.

For more than 20 years, we corresponded regularly.

Alwyn was a great correspondent – we still have a couple of his personal handwritten letters to us (one from 1990, the other from 1996). Typically these letters were full of wise guidance and interesting news (of the family, his work, and his and Fay’s current ministry activities). We always looked forward to hearing from him – wherever he was in the world at the time!

We spent time with Alwyn and Fay in person a number of times.

For about 3 weeks from mid-December 1975 through to early January 1976, we stayed with Alwyn and Fay and family in Port Moresby. We met Pate, their daughter, who was working at Kwikila at the time. We also accompanied Laevai to his birth family’s village, Harevavo, in the Gulf Province, where we were treated like royalty for 3 days. Our time with the Neuendorfs in PNG confirmed our commitment to support Alwyn’s and Fay’s work there, which we did until the end of their time with the mission. Alwyn and Fay stayed with us in Rockhampton two or three times in the 1980s and 1990s. The last time we spent time together was at their home in Awaba Court, Deception Bay, in 1995.

After 1996, regrettably, we lost contact with Alwyn and Fay.

But they did not forget us.

Following my Facebook enquiry, I obtained Alwyn’s email address, and I wrote to him. In his reply, he began: “What a surprise and what a blessing! I pray for you both and for Ruth and Daniel every Thursday morning – today.” After a 20 year hiatus, we discovered that Alwyn still prays for us and our family once a week. How precious and humbling is that!

The good news is that we visited Alwyn and Fay on Friday 8 April.

The following photos provide proof. Alwyn surprised us by inviting Laevai and his wife Setae to join us for afternoon tea. Although we were invited to their wedding (in 1978), we were unable to attend, so finally (after 38 years) we met Setae. And we hadn’t seen Laevai for 40 years! What a reunion!

I baked a pineapple upside-down cake (my Bung-in Cake) to share with them. Fay said she remembers making upside-down cakes. Tony took a bottle of his signature Mango Chutney, as he did when we last visited Alwyn and Fay in 1995 (Fay is pictured holding the bottle in the photograph of us at Awaba Court, above). This shows just how long Tony has been making mango chutney.

In 2016, Alwyn and Fay are 88 years old, and still living independently. They are very happy with their living arrangement. Alwyn is in good health, and seems as bright and energetic as ever. He is caring for Fay, who is not so able now. Alwyn is still actively involved in preaching and Bible teaching: in the local church and in the retirement village where they live.

Alwyn and Fay maintain a keen and prayerful interest in the lives of their children and spouses, their grandchildren and great-grandchildren. They keep in touch via email and when family members visit or come to stay with them (which is quite often). During our recent visit, Alwyn proudly showed us photographs of their seven children’s ever-expanding families and told us a little about each one.

I couldn’t help but think: “What a godly heritage these people have!”

We have promised to visit Alwyn and Fay again, and we will keep in touch with Alwyn and Laevai via email. We will pray for them too.

A big thank you to my friends and followers of Love in a little black diary on Facebook who responded to my query about the Neuendorfs. Tony and I feel truly blessed to have restored “The Neuendorf Connection”.

Following our visit, Alwyn emailed me a copy of his autobiography Open Your Mouth Wide. I commend it to you – Alwyn’s life story is simply amazing! Alwyn has not published it, and told me that he does not intend to do so. However, he is happy to email a copy to interested persons. Let me know if you would like a copy by making your request via my website’s GET IN TOUCH form. 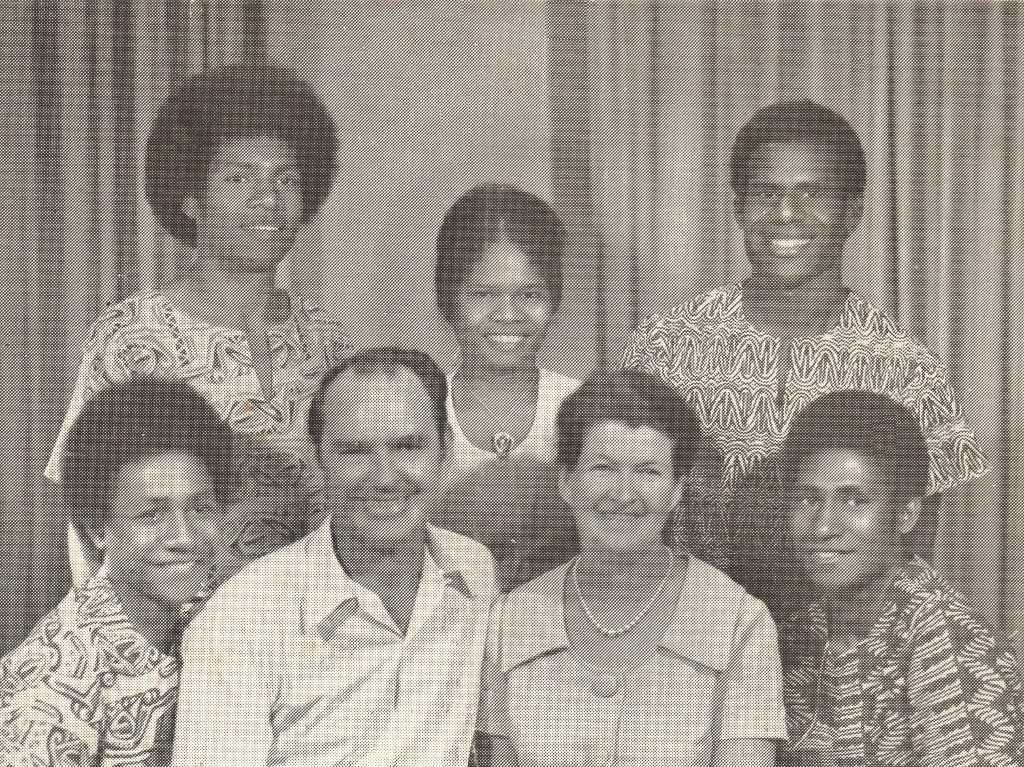 4 thoughts on “The Neuendorf Connection”