In my recipe collection, I have an old-fashioned honey pie recipe. It’s the only recipe in my collection attributed to “Thelma Baker”. Every time I make this sweet pie, I think of her and thank God I had the pleasure of knowing her. Why? This dear lady, long deceased, was one of the sweetest people you could hope to meet.

Given you are likely to have plenty of time on your hands during the present COVID-19 pandemic, you may like to make this velvety smooth honey pie for your family. It requires just a few basic, inexpensive ingredients, which you may already have in your pantry or refrigerator. If not, you should still be able to find them at your local supermarket.

Thelma Gladys Baker was born at Rockhampton, Queensland, on 20 August 1914.

William and Emma Baker were Christians and members of the Rockhampton assembly of the Congregational Union of Australia. Thus Thelma and her two brothers grew up in a loving, godly Christian family. As far as I am aware, Thelma’s Christian faith was an integral part of her life to the very end. When the Union dissolved in 1977 with the formation of the Uniting Church in Australia, Thelma joined the Uniting Church, to which she belonged for the rest of her life. She died on 26 July 1996, aged 81 years.

I only ever knew her as an older person. In stature Thelma was short, with a well-rounded although petite figure. She had short wavy dark brown hair (coloured I presume) and warm smiling brown eyes accentuated by the lenses and fancy frames of her spectacles. Her smooth wide brow and pale unblemished complexion belied her years. She had the most beautiful unaffected smile and her face lit up when she smiled or laughed (which was often). To top it off, Thelma had an excellent sense of dress, so she always looked immaculate.

Thelma belonged to my parents’ generation. At first, I called her “Miss Baker”. But that didn’t last for long. She wanted to be called “Thellie”, so I obliged. Yes, Thelma (“Miss Baker”) was a single woman – she never married. It was surely not for the want of suitors, though, as she was a very attractive woman, even in her early 60s.

For decades, possibly her entire working life, Thelma worked in the travel industry.

Thelma began her career as a booking clerk for Trans Australia Airlines (TAA) in Rockhampton. As she gained more knowledge and experience, she became a travel consultant. For many years she was a senior travel advisor for the travel branch of Walter Reid & Co, Rockhampton.

In 1975, Thelma came to work for my father, as a senior travel consultant in my father’s newly established business, The Hub Travel Centre, in Rockhampton’s Northside Plaza. This is when I met her. Thelma (“Thellie”) worked at The Hub Travel Centre for 5 years, until her retirement, in 1979 (or thereabouts).

On reflection, I think she would have been fine. She was never a person to complain or feel sorry for herself. I believe she would have made the best of the situation. And I’m sure her Christian faith would have given her solace in times such as these.

The lady I knew was a lively, sociable person, who valued the company of others. Although Thelma never married, I doubt that she was ever lonely. Throughout her long life, she made and kept many friends, my parents included.

When my mother turned 80 in January 1996, Thelma was one of the close friends my mother invited to the afternoon tea my husband and I hosted at our home in my mother’s honour. This was probably the last time I saw “Thellie”, as she died just six months later, in July 1996.

Thelma Baker was one of the sweetest people you could hope to meet.

Nothing was ever too much trouble for her. Her good manners were always on show. She exuded kindness. Her demeanour was always pleasant, calm and measured. Nothing rattled her. I can’t recall ever hearing her utter cross words. This gracious lady had a natural warmth that would melt the coldest of hearts.

How pertinent that the only recipe in my collection attributed to Thelma Baker is one for the sweetest of desserts!

On her own admission, Thelma Baker was not the most accomplished of cooks. Cooking was not her forté. So, when Thelma shared a recipe with her friends, it was sure to be a simple, foolproof one. That’s the case for this old-fashioned honey pie. It’s a no frills recipe that produces a surprisingly first-class result.

But there’s one condition: To produce a perfect honey pie, you need a suitable pastry case. You can buy one ready-made, but I recommend you make your own. The end result will be much nicer.

I use my mother’s recipe for Easy Pastry. If you follow my blog, you may recall that I shared this recipe in my post Luscious Layered Orange Jelly Pie (October 16, 2017). As I explained then, my mother’s Easy Pastry recipe is suitable for inexperienced pastry cooks, it’s quick and easy to prepare, and it’s reliable. The result is a not-too-sweet pastry that’s light, flaky and crusty on the edges and (best of all), when baked, one that can be stored or frozen for future use.

To make the honey filling:

To make the white “cream” topping: 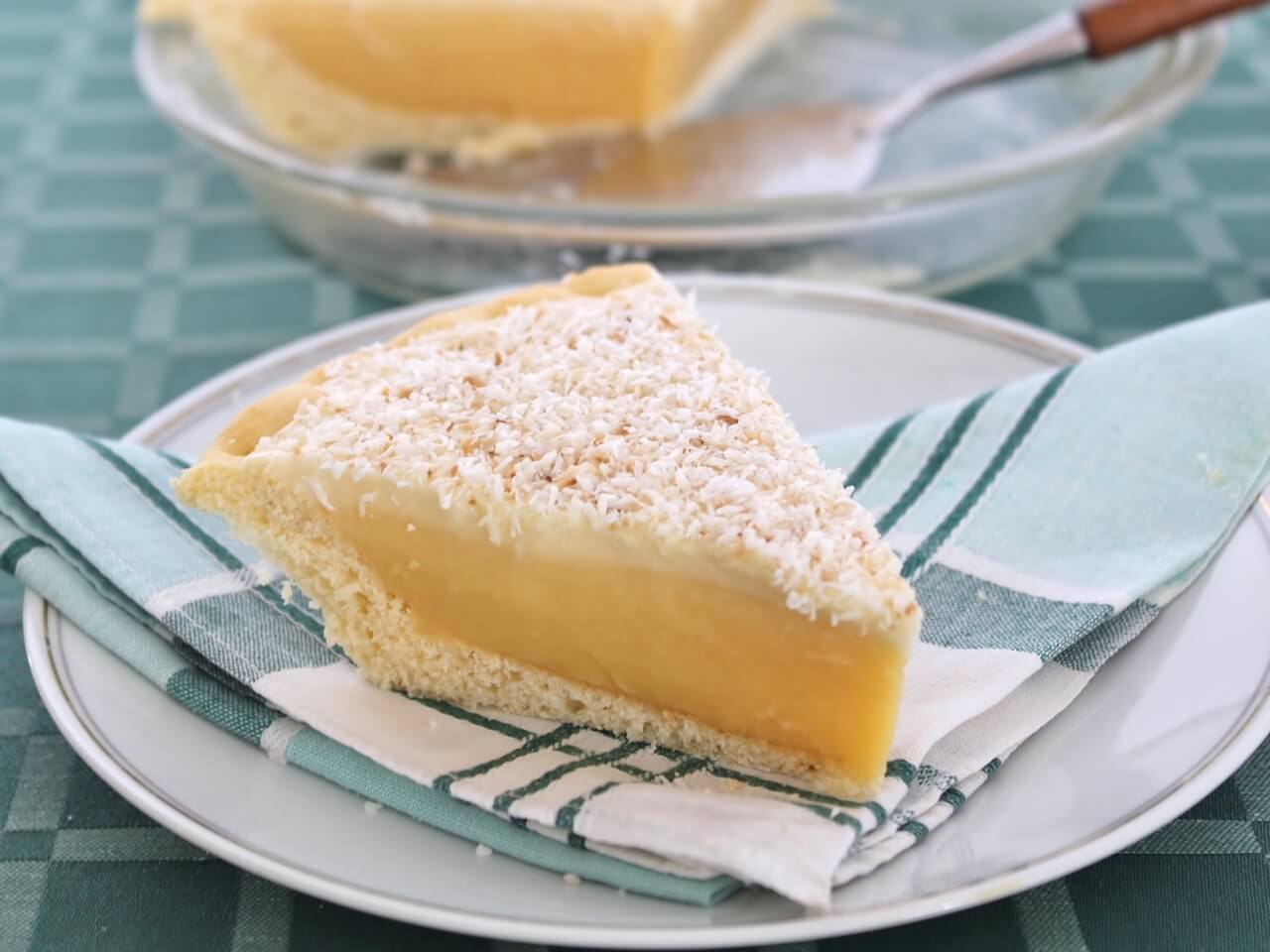