Korčula: This brought Tony to tears

When we visited the Island of Korčula in December 2004, it was 46 years since my husband Tony (born Ante Salečić) left the island and his hometown Korčula for far-away Australia.

Tony was in second grade at school when he left his homeland, and he remembers saying goodbye to his teacher Katja and his school friends. He has a perpetual memory of Katja and his early years in Korčula, via a little A-5 size photo album she gave him in September 1958, just before he left. Tony treasures this album.

One of the photos in the album shows Tony with his mother Anđjelka and little brother Dušan on the pier beyond the battlements at the northern end of Korčula Old Town, with Orebić, a township on the Pelješac Peninsula (the mainland), in the background. The photograph was taken in 1956, two years before they came to Australia.

This image, and the scene it depicts, has long been etched in Tony’s memory of Korčula.

We arrived on the island by ferry from Orebić at about 7.30 pm on Saturday 18th December (read Three buses and a ferry to Korčula). It was wintertime and the sun had long set. Now pitch black, we saw nothing of our surroundings as we were driven to the apartment in Korčula where we were to spend a couple of nights. The apartment was located close to and high above the Old Town.

I remember the night was cold. Our apartment, one large room, was like a huge fridge. The floor was made of stone and the walls rendered stone or brick. An odd rug or two on the floor helped ameliorate its harshness. There was one window, facing east or north-east, covered by an outer bi-fold shutter. We could hear the wind whistling outside. Was this the Bura, the much-dreaded icy wind that Tony often spoken about?

The Bura is an unpredictable cold dry wind, of varying intensity, that blows in gusts from the mainland towards the sea. Most common in winter, its effects can last several hours. Afterwards it leaves the atmosphere clean and clear, and the weather fine and sunny.

For Tony, this place brought back memories of winter in Korčula: his family home had been cold just like this, and he remembered the wind. Winter was a terrible time for him: during his childhood in Korčula, he was a chronic asthmatic, a sickly child.

After enjoying a hearty meal at Konoba “Marco Polo” in the Old Town (read Three buses and a ferry to Korčula), we returned to our apartment, tired yet exhilarated, as we anticipated what was in store for us the next day. In the morning, we planned to explore the Old Town, find the place where Tony was born, and see where he and his family lived before they came to Australia. In the afternoon, we would take a bus trip to Smokvica to visit Tony’s cousins and acquaint ourselves with the village where Tony’s parents were born and grew up.

On Sunday 19th December we awoke early, rested and full of excitement. Tony jumped out of bed and headed for the window. I joined him, as he opened the window and threw open the shutters. What he experienced next he will never forget!

This sight brought Tony to tears…

It was a fine clear sunny day! (It must have been the Bura we experienced last night.) Before us was the jewel blue sea of the Adriatic, with the town of Orebić and the gigantic denuded mountains of the mainland in the distance. The mountains were so imposing, so apparently near, that you felt you could reach out and touch them.

For Tony, witnessing this sight again after so many years, the experience was overwhelming. He shed tears of joy and sorrow.

It was the scene in which he and his mother and brother were pictured in 1956 as they stood on the pier at the northern end of Korčula’s Old Town. This beautiful place is from whence the family came; this is what they left behind when they came to Australia in the 1950s. Tony’s mother never returned to the island or her homeland; she died in Brisbane in 1988.

Later that morning, we took the following photograph, with Tony standing on the same pier as in the 1956 photograph. It gives some idea of the spectacular scene we beheld when Tony opened the shutters earlier that morning.

Our exploration of the Old Town began at the Veliki Revelin, a 14th century tower at the town’s southern land entrance. The Old Town was formerly encircled by a wall and moat, with access via a wooden drawbridge. In the 18th century the drawbridge was replaced by the wide stone staircase, which bridged the divide. The only part of the town walls that remain lie west of this tower.

Next we found ourselves at the south-eastern part of the Old Town, at the Tower of All Saints. Built in 1493, it was one of twelve towers forming part of Korčula’s battlements. Only the tower basement remains today. Tony is pictured here by one of the cannons, with this magnificent view of the Pelješac Peninsula, Orebić and the mainland.

We cris-crossed the Old Town and found Hotel Korčula, on the township’s western side. We dined at Hotel Korčula that evening. Finding this site was important for Tony, as his mother always told him he was born in a house in a street behind this hotel. Locals told us that there was a street named Don Jakova Salečić, just behind the hotel, so we went searching for it. The stone-paved streets in Korčula’s Old Town, as in Dubrovnik, are narrow and accessible only by foot.

Our next stop was West Harbour. From here, Tony could see his former school building, in the distance, across the bay. He pointed it out to me. Tony saw a local man, a fisherman, tending his boat, and decided to inquire about the school. Tony spoke in Croatian. After exchanging a few pleasantries, Tony pointed and asked the fisherman: “Is that building over there still used as a school?”

The man interrupted: “You were in my class. You are Ante Salečić, aren’t you?”

Tony could not believe it: The fisherman recognized him! “Yes. I left in 1958,” Tony stammered.

The man continued: “I’m Vinko Bonguardo. I was your classmate. I remember when you and your family left for Australia. I was really sad. We missed you. I can’t believe I am speaking to you again after all these years.”

Tony was again moved to tears. The two men hugged each other, and I took a photo of them, classmates reacquainted after 46 years!

A chance meeting? I think not.

We were nearly bursting with emotion, as we left the Old Town and headed back to our apartment. We had been invited to take morning tea with our hosts, Roko and Anđjelka, an appointment we didn’t want to forfeit. We were not disappointed with their warm and generous hospitality.

We travelled by local bus the 30 km from Korčula to Smokvica, a village of about 1000 inhabitants located in the middle of the long, narrow island. The village lies on the southern side of a hill, protected from the notorious cold winter wind, the Bura, which blows from the north. The large Neo-Romanesque Church of The Purification of Our Lady is situated at the heart of the village. It was built in 1920 on the site of the original 17th century church building.

The Smokvica region, which includes Brna, is renowned for its olives, figs and vineyards, and its signature Rukatac and Pošip wines.

Brna is a popular tourist and holiday destination, located on picturesque Brna Bay, a large bay 4 km south-west of Smokvica. Since the 1970s, people from Smokvica have built their summer houses here, hence the rows of detached houses. In earlier days, there were just a few small houses, used solely by local fishermen. A pier was built in the 19th century, so Brna could be used as a port for the village of Smokvica, to export its local wine.

Tony’s parents were born and raised in Smokvica. Here we met Yaka, one of Tony’s first cousins on his father’s side. We had arranged to visit her, so she was expecting us.

It was a joyful encounter. Yaka wanted to hear all about our visit to Split and Dubrovnik. However, we soon discovered that she already knew about our attendance at the Christmas Concert in Dubrovnik two nights earlier (read 24 Hours in Dubrovnik Part 1)! Apparently, the word had spread quickly among the locals: “Petar’s and Anđjelka’s son Ante and his wife are here: They will be visiting the island at the weekend!” We felt humbled and honoured by the local people’s interest in and delight about our visit.

Yaka, about 70 years old at the time, told us that she had lived in Smokvica all her life. She married and brought up her family there. Two of her adult children, Paval and Nell, still live on the island. They came to meet us, which was wonderful. Yaka also took us on a short walk to see the house where her father (and Tony’s father) lived when they were growing up.

Pavel and his wife Ivica and their two children live in Brna, and they drove us the short distance to Brna, to see where they live, visit their home and meet their children. Back in Smokvica, Paval and Ivica showed us their wine cellar, Vinarija Toreta, at the time located in the basement of Yaka’s house. They gave Tony a bottle of their signature “Toreta” wine to take back to Tony’s father in Australia. Wine in the local language is called vino, and vino was always served as part of the main meal in Croatian tradition.

On Monday 20th December, we said goodbye to Korčula. On our way to catch the ferry to the mainland, Roko stopped to show us the shipyards by the East Harbour where Tony’s father, Petar, used to work. Shipbuilding has been one of the island’s main industries for centuries. Petar was a painter by trade. Unfortunately, he was unable to gain employment as a painter in Australia: his certification was not recognized there. Initially, and for many years, Petar laboured as a cane-cutter in northern Queensland, a role far removed from that which he performed in the shipyards in his homeland.

As our ferry motored away from the island, we looked back wistfully. It was a dull day, but we felt elated. There were no tears today: Just goosebumps. Yes, it was cold, but this was not the reason for our goosebumps. This beautiful place, and the people we met, had touched our hearts, deeply. We knew then that this had been a significant life experience – not only for Tony, but also for me. 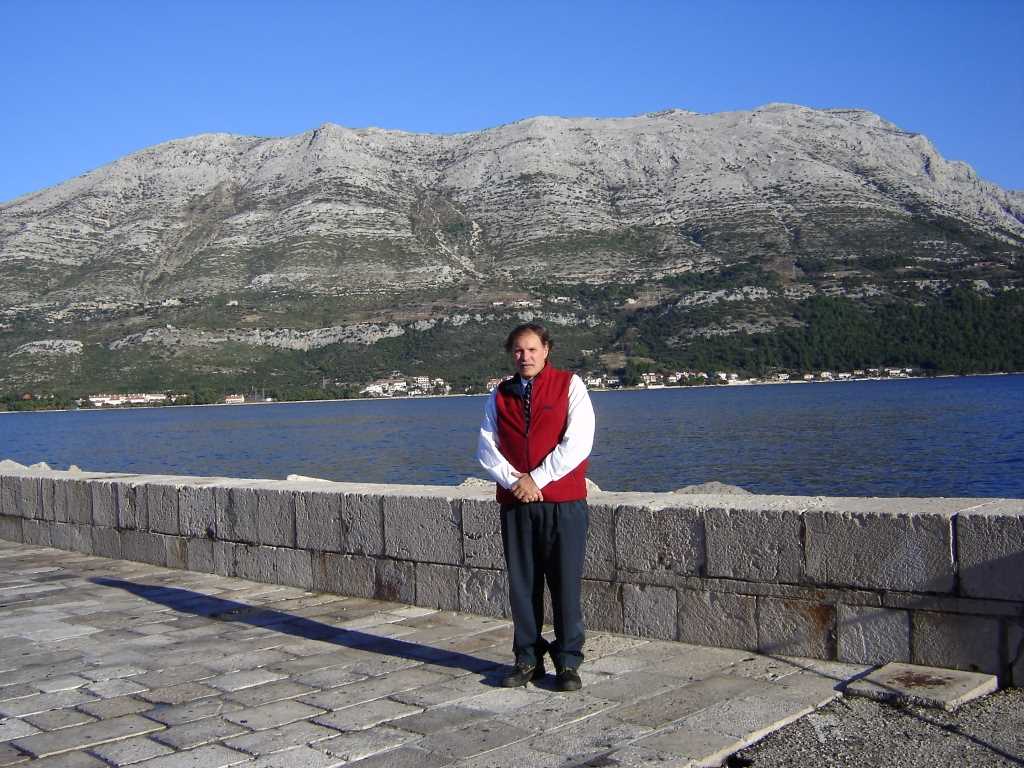 5 thoughts on “Korčula: This brought Tony to tears”