Three buses and a ferry to Korčula

After an absence of 46 years, in December 2004, my husband Tony revisited his hometown, Korčula. I accompanied him. After spending an amazing 24 hours in Dubrovnik and filled with much excitement and anticipation, we headed for the bus terminal, to catch the bus to Korčula.

Korčula is a small town on an island off the coast of southern Croatia. It has a typical medieval Dalmatian old walled town, which is often called “Little Dubrovnik” because of its resemblance to the much larger, famous mainland city’s World Heritage listed Old Town.

Korčula is located on the north-eastern tip of picturesque Korčula Island, separated from the Pelješac Peninsula in southern Dalmatia by a narrow channel. The island itself is long and narrow: 47 km long, with an average width of 5 to 8 km. It is the sixth largest island in the Adriatic Sea, which the Croatians call “Plavi Jadran”, meaning “Blue Adriatic”. Korčula is about 3 hours’ drive by car or bus and ferry north-west of Dubrovnik.

Tony’s parents were also born on Korčula Island, in the village of Smokvica (meaning “little fig”), located in the middle of the island. They migrated to Australia in the 1950s. Tony’s father, Petar, came first; Tony (born Ante Salećič), his mother Anđjelka and brother Dušan came two years later.

The journey begins: Boarding the Korčula Bus at Dubrovnik

It was 3.00 pm on Saturday 18 December that we boarded the “Korčula Bus” en route from Dubrovnik to Korčula, via Orebić. At Orebić we would take the short ferry ride from the mainland to the island. In just over 3 hours we would be there!

But that was not to be!

After travelling half an hour, it was clear that all was not right with our bus. The bus driver pulled off the road, stopped the bus and announced that we could go no further. He said that there was something mechanically wrong with the bus and he would have to call for a replacement. He apologized to his passengers for the inconvenience this may cause us, and asked us to be patient. He said he did not know how long we may have to wait for the next bus to come along.

We waited. Several buses came by, and each time we thought, “Oh, here it is!” But no, it was not our bus. We waited at least an hour on the roadside.

When our bus finally arrived, we discovered it was not really a “replacement” at all. It was en route to another destination but had enough seats to accommodate all of us and take us as far as the turnoff to the Pelješac Peninsula. From there, a local bus would take us the remainder of the way to Orebić. Located near the tip of the peninsula, Orebić was another 1.5 – 2 hours’ drive from the turnoff! In the end, it took us three buses and more than 4 hours to reach Orebić!

When we reached Orebić, it was dark, we couldn’t see the sights we had anticipated for so long, we were tired and hungry, and our excitement had abated. We still had the short ferry ride to go before we would arrive in Korčula. The ferry connects Orebić and Dominče, the ferry terminus on Korčula Island, 2 km from the town.

We were worried that Ratko, our host and co-owner of the Ojdanić Family Apartments where we were to stay, may not be there to meet us. We were so late. Had he been informed about the delay? Would we have to wait yet again? Please, Lord, we prayed, don’t make us wait any more…

The journey ends: Korčula at last

When we arrived at Dominče, Ratko (“Roko”) was there, waiting for us. Roko was a man of generous proportions, with dark olive complexion, short black hair and bushy black moustache. Most importantly, he was warm and friendly, and we felt at once welcomed and relieved. He collected our luggage and placed it in the back of his large ute. We climbed into the cabin, and he drove us the short distance to our apartment.

Roko and Tony spoke in Croatian, venturing beyond the pleasantries. “When did you leave Korčula? How old were you? What do you remember? Do you have family still here?” Roko asked. He pointed out a few landmarks as we drove, but we could see almost nothing. It was such a let-down, especially for Tony.

After showing us our apartment and dropping off our luggage, Roko recommended we have dinner at a restaurant called Konoba “Marco Polo”. He told us it was well known for its traditional Dalmatian cuisine, it was within walking distance of the apartment and it would still be open, despite the late hour (it was almost 8.00 pm).

We had read in our Lonely Planet guide to Croatia the claim that Marco Polo was a “son of Korčula”. In 1254, the year of Marco Polo’s birth, the Island of Korčula, or Curzola, as the Venetians called it, was under Venetian rule. While it is strongly debated where Marco Polo was born, I note that the Croatian National Tourist Board has the following statement about Korčula on its website:

“As the historical heart of the island of the same name, the city of Korčula is one of the best preserved medieval towns on the Mediterranean. The birthplace of Marco Polo, it boasts a heritage rich in history, architecture and culture.“

It was Saturday night, but there were not too many people out and about in “downtown” Korčula. After descending several steep stone stairways in dim light, we walked briskly in the cold night air along the ancient stone-paved streets of the old town. We found Konoba “Marco Polo” without too much difficulty. It was tucked away in a narrow street not far from the eastern harbour. Evidently people eat at tables outside in the warmer weather. Inside it was small and homely, its décor both rustic and nautical. There were 3 or 4 tables neatly set with colourful cloths and candles and, as I recall, we were its only guests at that time that night.

Given that Dalmatia is famous for its seafood, and this was a “Konoba” (a restaurant registered to prepare seafood and local produce according to traditional Dalmatian ways), you can guess what we chose from the menu. Tony selected “Frigane lignje” (fried squid) and I chose “Domaći makaruni s plodovima mora” (homemade macaroni with seafood). Our meals were superb: well-cooked, delicious and hearty, and we returned to our apartment well-satisfied and relaxed (in contrast to how we felt when we arrived).

We needed a good night’s sleep to prepare for the next day. Little did we know what other surprises were in store for us… 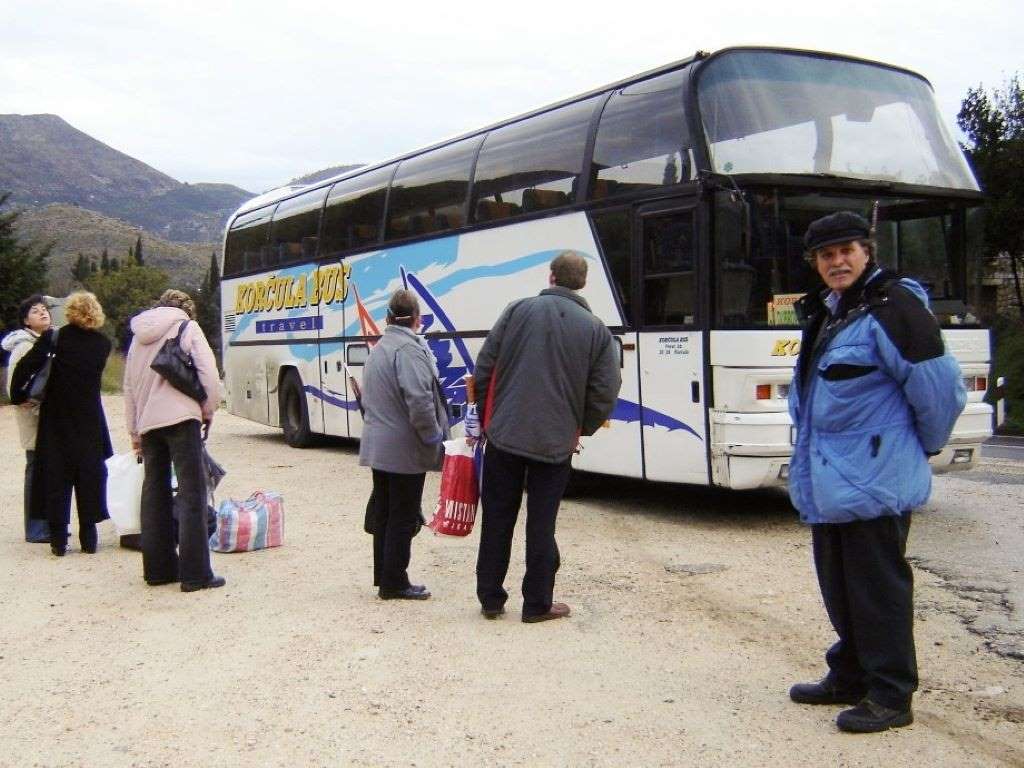 4 thoughts on “Three buses and a ferry to Korčula”