Vanillekipferl, or Vanilla Crescents, are among the many traditional festive biscuits baked each year at Christmastime by home cooks in Austria, Germany and a number of other European countries. For most families in these countries, Vanillekipferl are an essential part of their Christmas fare.

Baking festive biscuits (called Keks in Austria, Plätzchen in Germany) is a popular Advent activity in Austria and Germany.

Advent is the first season of the Church Year according to the Western Christian Church tradition. It’s the time of year when Christians prepare for Christmas, the celebration of the first coming of Jesus Christ, the God-child born to a woman in Bethlehem over 2000 years ago. Advent begins on the fourth Sunday before Christmas Day, the Sunday nearest to November 30, and ends on Christmas Eve (December 24). This year (2018) Advent began on December 2. In 2019, Advent begins on Sunday 1 December.

In days gone by, the special biscuits home-baked during Advent were not only for eating, but also for decorating the house and the Christmas tree. That is probably why many different shaped biscuit cutters were created. While crescents, rounds, oblongs and diamonds are usually handmade, stars, bells or figures are cut out of the biscuit dough.

Vanillekipferl are delicate melt-in-your-mouth biscuits with a nutty flavour.

They are coated in vanilla-flavoured icing sugar, which gives them a snowy-white appearance and, in part, explains their name.

However, the most distinguishing feature of Vanillekipferl is their shape. They are formed to look like a crescent (a familiar moon-shape) or horseshoe. “Kipferl” is an old German word for “croissant”, a crescent-shaped pastry.

According to folklore, Vanillekipferl originated in Vienna, home of the former Hapsburg Monarchy and capital city of present-day Austria.

The biscuits were created in the shape of the Turkish crescent symbol to celebrate one of the victories of the Hapsburg army over the Ottoman (or Turkish) army which besieged Vienna (in 1485 and again in 1683).

Today, these short buttery crescent shaped biscuits can be enjoyed all year round in Viennese coffee houses. They are a part of the “Viennese Coffee House Culture”, since 2011 listed as an Austrian and UNESCO “Intangible Culture Heritage”. The Wiener Kaffeehaus (Viennese coffee house) has long been a meeting place for artists, writers, intellectuals and “originals”. Patrons not satisfied with the variety of existing coffees developed variations of their own. The most famous are the “Obermayer”, named after a member of the Vienna Philharmonic Orchestra, and the “Überstürzte Neumann”, created by a regular guest of the legendary Café Herrenhof.

Vanillekipferl are ideal biscuits to serve with a cup of coffee or tea.

Their high butter content makes them delicate and light. Traditional recipes for Vanillekipferl, as for shortbreads, do not include eggs. I’ve seen recipes online that include an egg or two, which would make the dough softer and easier to work with, but Vanillekipferl made with eggs will not be as fine and crumbly as those made without eggs. The latter really do just “melt-in-your-mouth”.

If you cannot buy ready-made vanilla icing sugar, you can make it easily at home.

Simply grind to a powder one cup of caster sugar with the seeds scraped from one vanilla bean. I used a spice grinder, but you may have a food processor that can do the same job.

After I prepared the vanilla icing sugar, I made some “vanilla sugar”. Vanilla sugar is made by mixing the same two ingredients (one cup of granulated sugar, the seeds of one vanilla bean). To combine, I used a blender and the pulse function, making sure the seeds were evenly distributed and the sugar remained granular.

I transferred the vanilla sugar to small jars, added half of the used vanilla bean to each jar, then sealed the jars. I plan to give these as gifts, along with the Vanillekipferl. You can use vanilla sugar in cakes, biscuits, pastries, pies and puddings, on cereals and fruit, and add it to coffee, tea or milk drinks.

I can’t say that making Vanillekipferl is easy.

After preparing the dough, divide it into 2-4 balls, cover or wrap the balls in plastic, and store them in the refrigerator for several hours (up to one day). The dough will go hard.

To make the biscuits, use one dough ball at a time. Leave the remainder in the refrigerator. The dough will crumble at first, but as you handle it the heat of your hands will make it pliable, so you can roll it out and form the crescent shapes.

Do not over-bake the biscuits or they will become too brittle to handle. Once the tips start to turn golden brown, they are ready.

Allow the biscuits to cool completely before placing them in a sealed container and leaving them for 2-3 weeks to soften.

“Voila!” she said, after providing me with these tips. In other words, “That’s all you need to know.”

The following recipe for Vanillekipferl is a traditional Austrian one, which I’ve translated from German and added a little more detail.

It comes from a little book entitled Best of Kekse: Die besten keksrezepte aus Österreich, which my son Daniel gave me one Christmas. In it he wrote: “A small gift to remind you of Austria!” During the 12 years or so Daniel lived in Vienna, my husband and I visited Vienna and stayed with him a number of times, but our first visit was at Christmastime.

The wonder of Christmas in Vienna, an account of that memorable first visit to Vienna, is the next story on my blog.

To make the vanilla icing sugar:

To make the dough and biscuits: 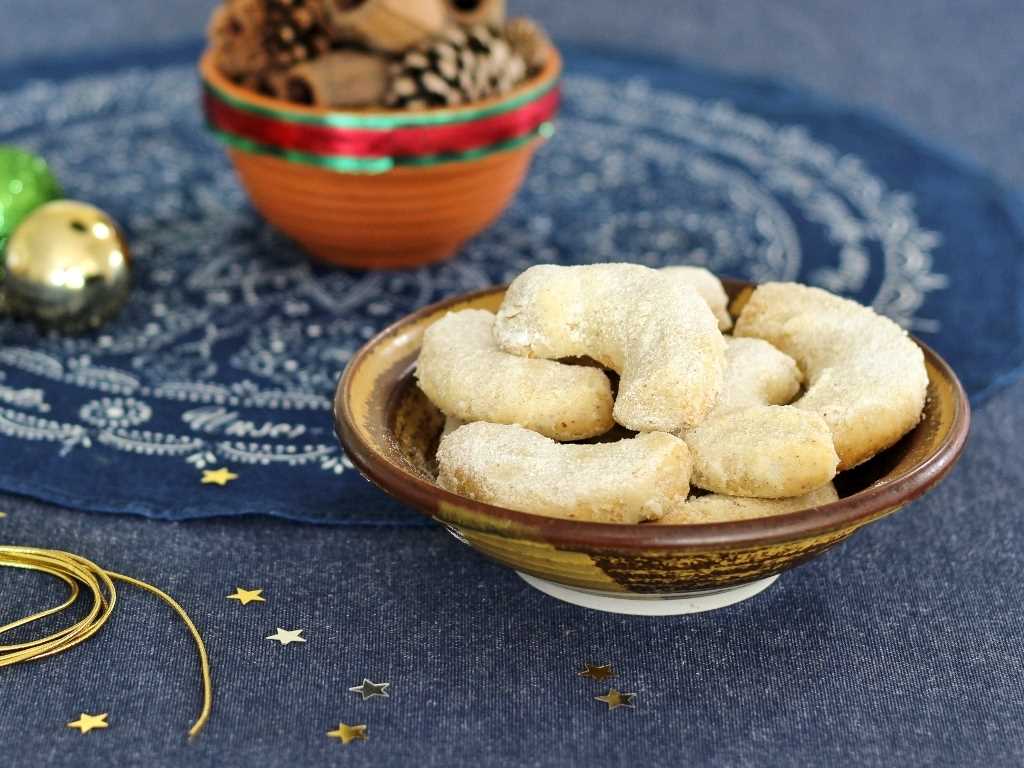