In 2015, while visiting my family in Germany, I learnt how to make Zimtsterne, that is, Cinnamon Stars.

Zimtsterne are traditional German Christmas biscuits sold at Christmas markets and in grocery stores in Germany, Austria and Switzerland during Advent, the 3-4 weeks leading up to Christmas. During Advent, many folk in these German-speaking countries bake their own Zimtsterne, along with many other wonderful festive biscuits.

The photograph below shows a gift box of homemade Christmas biscuits baked by a German family member. These biscuits include Vanillekipferl (crescent-shaped vanilla shortcrust biscuits), Kokosbusserl (coconut macaroons), Florentiner (Florentines), Lebkuchen (German spiced gingerbread biscuits) and Haselnuss-Makronen (hazelnut macaroons), to name a few. Of the many varieties of homemade German Christmas biscuits, Zimtsterne are perhaps the most popular and best known.

This Christmas, as well as making my usual Christmas Cake and Almond Bread, I had a go at making Zimtsterne. I wanted to try baking something new. But more than this, I want to share these delightful German Christmas biscuits with my Australian family and friends.

The recipe I used is the one my German daughter-in-law used and demonstrated for my benefit last year. I’ve applied my somewhat limited German language skills to translate the recipe into English. You will find it at the end of this post, along with a slideshow of the process I used.

Zimtsterne are naturally gluten-free and dairy-free. The egg whites and icing sugar form a meringue, which binds the ground nuts together. For the ground nuts you can use either ground almonds or hazelnuts, or a combination of the two.

Zimtsterne, or Cinnamon Stars, as the name suggests, contain cinnamon (“Zimt”). The addition of cinnamon gives the biscuits their distinctive mild sweet-and-spicy aroma and flavour.

Other ingredients include vanilla and rum, for flavouring. In Germany, one can buy little packets of Vanillin-Zucker (“vanilla sugar”) at the grocery store. In Australia, this product is not readily available, so I replaced vanilla sugar with one teaspoon of vanilla extract. The recipe also suggests adding a few drops of rum, but that’s optional.

What makes Zimtsterne distinctive is their shiny, snow-white frosting.

You spread the reserved meringue evenly onto the stars before they are placed in the oven. My daughter-in-law called the meringue “Schnee”. That’s snow in English. How appropriate, I thought, considering that in Germany it is often snowing outside at this time of year! During baking, the meringue sets into a light, crunchy, sweet coating. These “snow-covered” biscuits not only taste good, but they look fantastic too.

The process of making Zimtsterne is straightforward and not too difficult to follow. However, be warned. The process is time-consuming. Cutting out the stars and covering them with meringue is painstaking and time-consuming. If you are a perfectionist like me and want your stars to be perfect, don’t be in a hurry. Of course, despite my best efforts, my Zimtsterne did not turn out flawlessly like the commercially produced ones. But they taste wonderful and have that certain charm characteristic of homemade goodies.

Why not try making Zimtsterne yourself this Christmas?

I guarantee that your time and effort will be well rewarded.

Yesterday I made a batch of Zimtsterne. I used a metal six-pointed star cutter, so I produced six-pointed stars this time. As well, I rolled the dough to about 0.5 cm thickness, so the stars are not as thick as before. With this cutter and a thinner-rolled dough, the mixture made 80 stars. 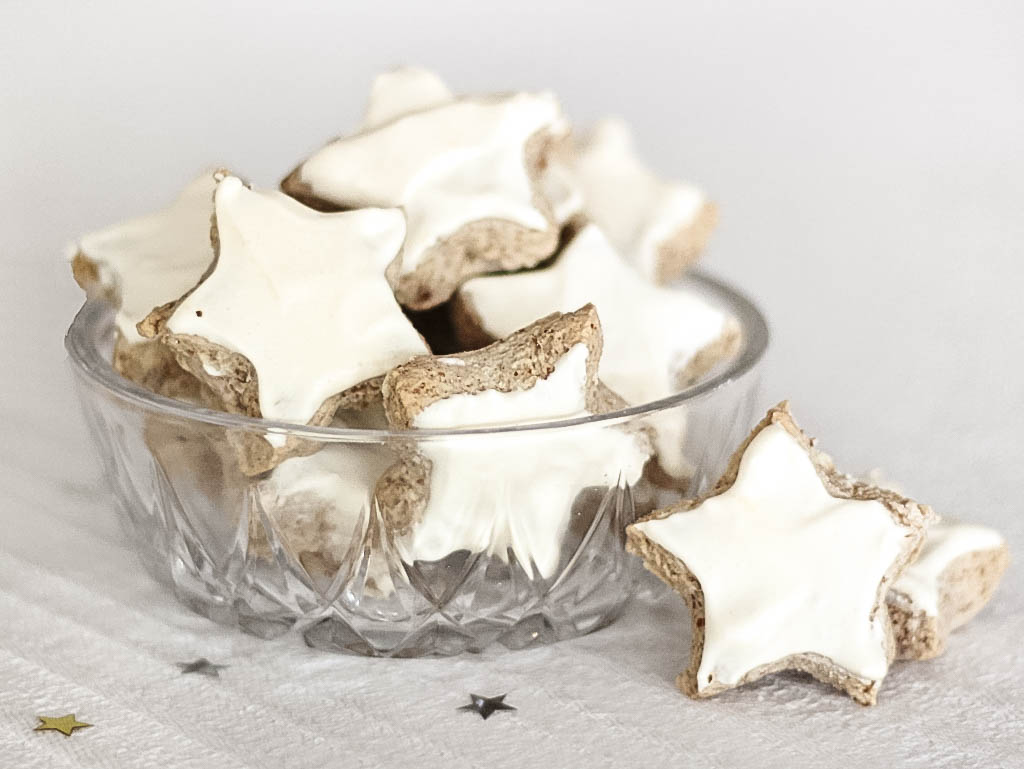