This post, which features Fail-Me-Never Steamed Pudding, is all about puddings. It includes puddings my grandmother and mother made as well as my favourite puddings.

Fail-Me-Never Steamed Pudding is one of my favourites (as you will discover). I remember my mother making it often during the winter months as a comforting warm dessert to end the family meal. Fail-Me-Never Steamed Pudding combines readily available ingredients, is easy to prepare and doesn’t take too long to cook. And, as its name suggests, it is fool-proof! You’ll find my recipe at the end of this post.

When I was growing up in the 1950s and 1960s, we called the sweets course at the end of a meal “pudding”. In Australia in those days we followed the British tradition. Today, however, Australians are more likely to call the final part of a meal “sweets” or “dessert”, having been influenced by traditions from other parts of the world such as the United States of America and Canada.

“Pudding” is also the name given to a particular kind of food that is part of Britain’s culinary history. A pudding can be either savoury or sweet. The earliest known puddings (in medieval England) were meat-based. Sweet puddings based on flour, sugar or honey and dried fruit or nuts were introduced later and, by the end of the 18th century, most puddings were of the sweet variety. Historically, a pudding was cooked by placing the ingredients in a cloth “bag” and boiling them.

The Christmas “Plum” Pudding popular in Britain and Australia follows this tradition. This rich, sweet pudding contains dried fruit such as raisins and sultanas (not plums) and the cake-like mixture is placed in a tightly sealed cloth bag and boiled for several hours. I remember my mother making Christmas puddings in this manner year after year.

Why do I love to cook puddings?

Firstly, my family and I like to eat them. After the main course, my husband Tony always asks: “What’s for pudding?” Likewise, my children and grandchildren look forward keenly to the sweets at the end of a meal. Of course, they have to eat all of their vegetables before they are allowed to have sweets!

Secondly, Tony and I believe it is important to show hospitality, so we often invite guests home to share a meal with us. The highlight of a meal or dinner party is often a well-chosen homemade pudding. Some of the puddings I make are novelties for our guests and therefore something special I can offer them.

Finally, I had two good teachers: my grandmother and my mother.

My grandmother (“Nan”) made the most wonderful puddings. She made one almost every day in readiness for the evening meal. In Australia at the time (mid-20th century) a two-course evening meal was the norm for most families. Typically, the evening meal consisted of meat and vegetables followed by pudding. Most of Nan’s puddings were milk-based and baked in the oven of her wood-fired combustion stove. They always turned out perfectly. I used to think: “I hope I can cook like that one day.”

Here is a photograph of Nan, standing proudly by her new combustion stove, when she was in her 80s.

Nan’s specialties were: Baked Egg Custard, Lemon Delicious, Baked Rice Pudding, Tapioca Pudding and Lemon Sago (this one she cooked on the stovetop). Sometimes she served these puddings hot (warm), at other times cold. Without exception, stewed or tinned fruit accompanied them. Nan always served her fine creamy Baked Rice Pudding with stewed prunes. Needless to say, I follow her example in this regard.

My mother, Evelyn, also made delicious puddings. As I wrote in Kentish Cake and Slice of History (May 21, 2016), Evelyn learnt to cook at home. Her mother was a fine tutor. Years later, when Evelyn was married and managing her own household, she expanded her repertoire of recipes.

In Kentish Cake and Slice of History, I featured two recipe books Evelyn used throughout her married life. The All-Electric Cookery Book Fourth Edition (1949) was one of them. Section 6 of the All-Electric Cookery Book is devoted to “Puddings, Baked and Steamed”. Notably, the list of puddings is extensive. This suggests to me that the humble pudding played an important role in the culinary habits of ordinary Australians at that time (mid-20th century).

Evelyn made many of the puddings listed here and others as well. She collected recipes and was always keen to experiment with new ideas.

There are three main methods for cooking puddings.

#1. Some puddings are cooked over a steam bath.

The cake-like mixture is poured into a greased basin, which is placed uncovered in a saucepan partially filled with water. The water is brought to the boil, the lid placed on the saucepan and the temperature lowered so that the water continues to boil gently throughout the cooking time. My mother’s favourite steamed puddings included Fail-Me-Never Steamed Pudding, Date Pudding and Golden Syrup Sponge Pudding. She always served these puddings hot with warm custard.

#2. A wide variety of puddings are oven-baked.

#3. Other puddings are cooked by bringing to the boil a milk-based mixture in a saucepan on the stovetop.

What are YOUR favourite puddings?

By puddings, I mean all those old-fashioned sweet foods that are prepared by baking, steaming or boiling and are served at the end of a meal. I’m not referring to sweet pies. My mother made lots of amazing sweet pies, which she served as desserts. But these are classified as pastries, not puddings. Furthermore, I’m not including pavlovas or cheesecakes, both recent additions to dessert menus. I do not class these sweets as “puddings”.

At the end of this post, I invite you to share with me and my readers some of your favourite puddings.

Here are a few of MY favourite puddings.

Bread and Butter Pudding is simple and inexpensive to make and a practical use of leftover or stale bread. It is essentially a baked egg custard with the addition of buttered bread. It can be varied in a number of ways:

This is also an egg-based custard, fortified with the addition of plain flour and coconut. Nana’s Impossible Pie is baked in the oven and, as it is cooking, the mixture separates into three layers. The flour forms a pastry-like base, the coconut forms a crusty top and the egg custard forms a soft luscious middle layer. I plan to share this recipe with you in a future post.

My mother gave me the recipe for Fail-Me-Never Steamed Pudding. As its name suggests, it never fails. I have used this recipe over and over again for about 40 years and the pudding is always a success. I like the recipe because it requires just a few ingredients and it involves just a couple of simple steps. Time-wise, the mixture is quick to prepare and, once poured in a basin and placed in a steamer, one just sets the timer and waits. It’s as easy as that!

The recipe is versatile. Fail-Me-Never Steamed Pudding serves as a comforting warm dessert during winter and the cooler months of the year. The pudding is cake-like and may be used in lieu of a rich fruit cake. It keeps well. However, because it is so moist, I recommend that you store it in the refrigerator. The pudding also freezes well. If any is left over, store it in the freezer for use at a later date. To serve, simply thaw and reheat it in the microwave. The pudding will taste just as good as when it was first served.

Unlike my mother, I have never made a Christmas “Plum” Pudding by boiling the mixture in a cloth. Instead, at Christmastime, I often make Fail-Me-Never Steamed Pudding as a substitute “plum” pudding. No-one seems to know the difference, it’s so good! In 2004, when my husband Tony and I spent Christmas with our son in Vienna, I made a Fail-Me-Never Steamed Pudding and a Boiled Custard for our Christmas Eve dessert. We were all very pleased with the result!

Have you heard the old English proverb: “The proof of the pudding is in the eating“? It means that we measure the success or failure of our plans or efforts by the end result.

So, why not test the truth of my claims about Fail-Me-Never Steamed Pudding by making it yourself and sharing it with your family?

You may have noticed in one of my photographs, on a blue table centrepiece, the text “Unser täglich Brot gibt uns heute”. It’s German for “Give us today our daily bread”. This is a phrase Jesus included in the prayer he gave his disciples as an example. The Lord’s Prayer, as we have come to know it, is found in the New Testament in the gospels of Matthew (Matthew 6:9-13) and Luke (Luke 11:1-4).

I bought the beautiful blue stencilled centrepiece in January 2016 when Tony and I visited the Local History Museum in Dissen-Striesow, Lower Lusatia, in eastern Germany (Brandenburg). It is typical of “Blaudruck”, or blueprinting, a method of dyeing linen or cotton fabric which produces a white pattern on a blue background. Blueprinting is an ancient craft still practised by the Sorbs (or Wends) of eastern Germany.

My ancestors on the Proposch (my father’s) side of my family migrated to Australia from Germany in the 1850s. However, they were not Germans, but Sorbs (or Wends), a Slavic minority group who lived (and still live) in eastern Germany, near Cottbus. My great-great-great-grandparents, and their parents, lived in Dissen and Babow and worshipped in the local Protestant church in Dissen-Striesow. They were devout Christians. Earlier this year I wrote about the Sorbs (or Wends), their customs and traditions, and my connection to these people, in Easter in Germany: Sorbs, Wends and Easter eggs (April 12, 2017). If you are interested in social history and/or family history, then this story is for you.

In the comments section below, don’t forget to share your favourite puddings. Tell us why they are special to you. 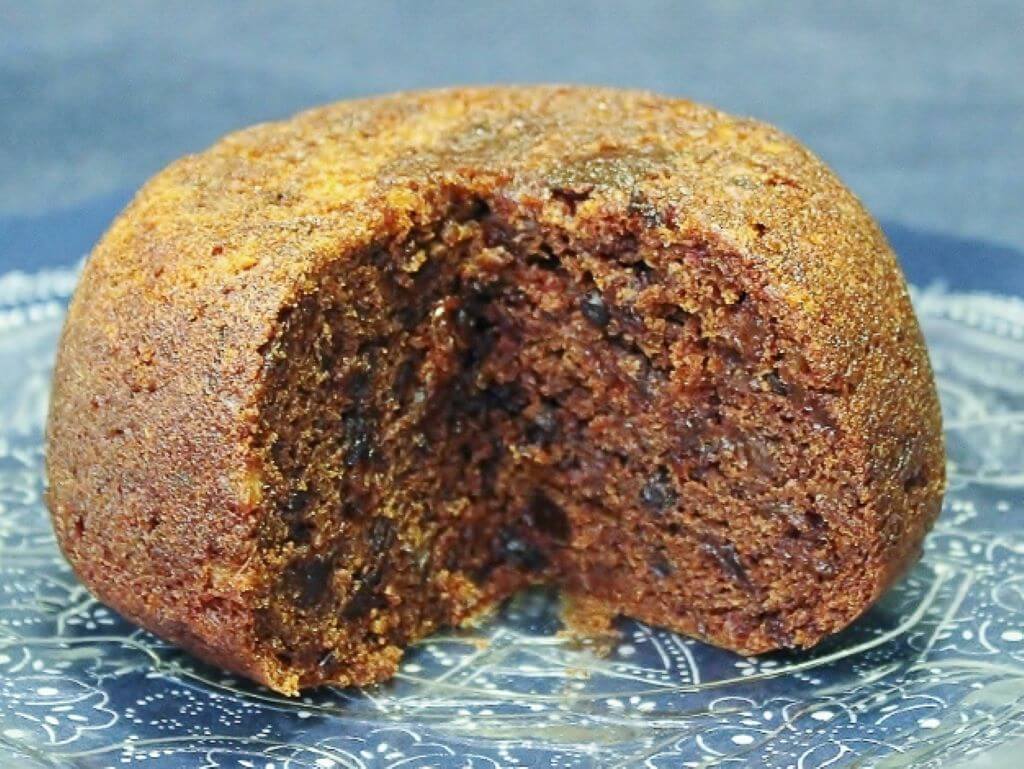